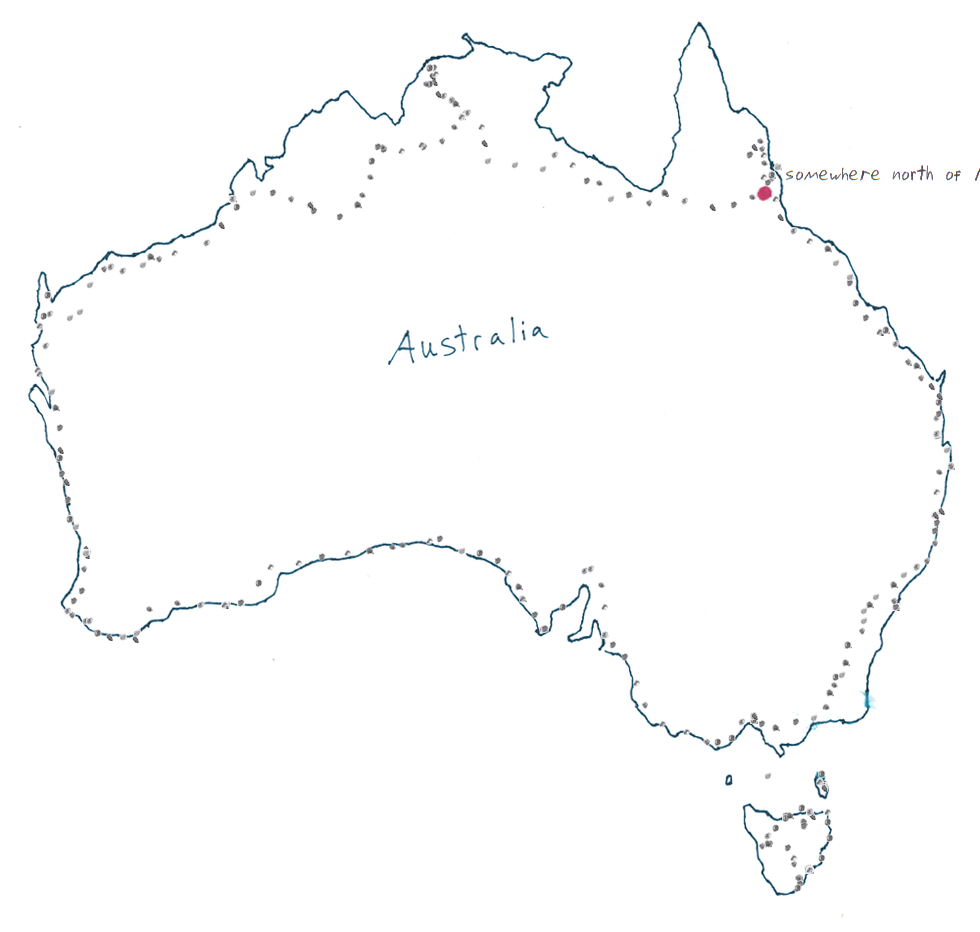 Only biked about 80k today but it felt like about 150k. Hills, rough road, a visit to the doctor, two flats, and taking the wrong road.

Got up early and made breakfast, left soon afterwards. Did the take water/leave water thing in Yungabarra and headed out of town. Saw signs to a Fig tree but I didn't feel like biking the extra distance since I wanted to go into Atherton. Should have gone the other way however. Later found out about the Fig tree, it is this large tree with it's viny leaves hanging about 15m/45ft down to the ground.

Got into Atherton and found a small sporting goods store. Wanted to pick up an extra spare tire for the trip ahead. They actually had one in the size I wanted, but it doesn't look like it will hold up that long.

Decided to go to the doctor and see about my ear. Ended up having to go to three doctors offices to find one that would see me without me having to wait around all day. He said it was just congestion in my ear, not a biggie.

Headed out of town on made my way to Heberton. Right outside of town on a hill was a roadside memorial that looked like the accident had recently happened. A tree was missing its bark and was all gouged up. Beloe it were flowers, notes, and two high school rugby jerseys. It was pretty sad.

Got into Heberton and checked out the town little. Earlier in the day I saw a way that would get me to Mt. Garnet via gravel roads...a nice change from the sealed pavement and cars. I found the road and started down it. I soon passed what I thought might be the turnoff road I wanted, but it wasn't marked so I kept riding. About 4k and one hill drop later, I remembered I needed to check to see if that was the road I wanted or not. GPS showed that it was...dang. The way I was going would still get me there so I just continued on.

They say that if it ain't broke...don't fix it, meaning I should have just left my big tires on yesterday instead of changing them. Yesterday I changed into my skinny tires so I could wear them out and no longer be stuck with them. My rear tire wore out and exploded. After I got done fixing it, I noticed that the GPS decided to clear it's memory...there went yesterdays track...so no map for yesterday and half of today.

Got into Irvinebank around 4pm. Looks like it used to be a pretty significant town at one time, but not much was left except a lot of signs indicating what was there. Found the road I needed heading south and started down it. After passing between a couple properties with the most car parts per capita in the front yard. The road got really rough. I got a little nervous since I was all the way in this far and now had to deal with 40k of road like this. Turns out the first part of the road was also a creek drainage...so the road got better.

It was pretty nice riding through the forest on this dirt road. Nice until the road decided to climb 1000 feet...that wore me down pretty good. I eventually reached a junction that was not on the map. I went down the road that had a sign on it...about 2k down the road looking at the GPS and realizing that this was some sort of connecting road between the one I was on and the one I wanted to take a few hours earlier. I backtracked, then turned back around again and decided to just go down to the other road. Had a really hard time figuring out what I was going to do...that's when it helps to travel with someone...makes decicion making easier. Went down the road a bit in the dark w/ headlamp and found a spot to camp in the brush. Today will put me behind a little, but hopefully tomorrow I can get up earlier and make up the difference.