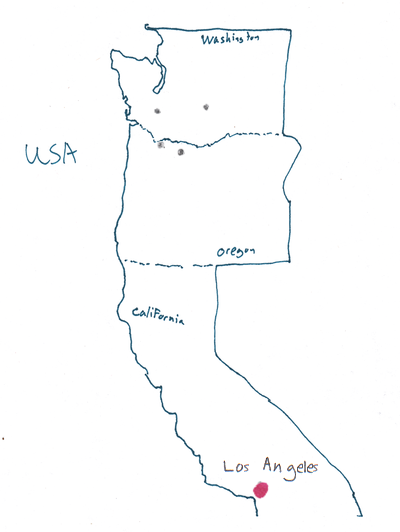 I'm at the airport now waiting for my flight to Auckland. The shuttle bus was 20 minutes late, and they charged me an extra 8 bucks for the bike...even though I loaded and unloaded it. Yay, both luggage pieces weighed in ok. The bike box was 31kg, just barely made that one. Going through security they were perplexed by my Nice bisquits but figured it out. We started talking about cookies and I mentioned I had bought 9 packages of Tim Tams at the store. The security woman said "really! Did you buy them when they were on sale, $1.75?". "Yes, $1.75 indeed, I saved about 10 bucks".

ok, more later.The flight up to Auckland was already, I got the usual Coke and Nuts deal. Landed in Auckland. It was familiar, I was here 3.5 months ago, except I hadn't slept in 30 hours so my memories were a bit spotty. I did the 1.5 km walk to the international terminal. Now I had about 6 hours to kill and killed them I did. Played a lot of Major Havoc on the MAME arcade emulator, while watching sparrows fly around inside the terminal. Went to the bookstore. Found a book on kiwi slang...most of which I'd never heard before, such as a "Turd Strangler" being a synonym for "Plumber".

I went though the huge mess of security and finally I was at the holding tank before you get on the plane. This is the first time I'd been around so many Americans in 17 months. Wow, the stereotype is actually true. My ears were ringing because it was so loud, and a lot of the kids were hi-fiving each other.

On the plane I was, we took off and that was it for the southern hemisphere terra. There was this huge group of kids on the plane from some sort of exchange program, they were all noisy. Other than that the flight was alright, the Tetris game on the back of the seat was too hard to play at level 10 with the supplied controller, that was bad too. We landed in LA, back in the USA. It was hot.

Soon I found mysself in a huge line waiting to get though customs. Slowly the line came closer. There was a small 8x10" photo of George W Bush above the doorway. Slowly Bush and I got closer to each other. I took a picture of him and walked in though customs. Got though customs and then waited for my bike. Incredibly cute girl was also waiting for some oversized baggage. I talked with her a little, funny we'll never see each other again.

After a lot of pushing my 140 pounds of stuff around I ended up in a lackluster meeting area. No Sara, I was a half hour late. I turned and saw a girl who had just walked in asking one of the airport people something...it was Sara! It was good to see her again, I hadn't seen her in about five years.

We got the bike loaded into the car. I got into the right side of the car, it was a little wierd being on the "wrong side" of the car, but I got used to it. At one point we went over what I think was the 405 freeway. Cars backed up forever!, at least we were'nt on it. We ended up at Sara's house. I met her husband Michael and their new daughter Riley. We talked a bit. Sara gave me something I've yearned for, something I've had the urge to do for a long time and haven't been able to do, Sara gave me proper chips and salsa. Not the salsa from a jar, the kind from a plastic tub with lots of cilantro. I ended up taking a nap for a few hours, when I woke up it was dinnertime. We went to a mexican restaurant, since I hadn't had proper mexican food in ages either. I went to get cash out of the cash machine and found out I only have 90 bucks left in my account, yikes!

Sara and I drove though Beverly Hills. She showed me the Saks where Winona got busted for shoplifting. Then we drove past this one spot on Rodeo Drive which for some reason that neither of us can figure out, all the tourists take pictures of. It is just some cobblestone walkway sort of thing. Sure enough there were about 10 people standing on the traffic island with their camcorders in the middle of the night videotaping the thing. We drove to the public park and walked to the bathroom where George Michael got busted in 1998 for "Engaging in Lewd Conduct". I got some pictures of Sara and I for what else, humancock.com!

Later that night Sara and I went out on the down. We drove down Sunset Blvd. "There is where John Belushi died, River Phoenix died on the sidewalk there", Sara would say. We found a place to park and went into the Standard. It was this hotel bar, behind the bar is this cubby hole that they have these people lounging out in reading magazines and stuff..."live art" I guess. This nice guy with 1986-era Sammy Hagar hair came over and waited on us. The drinks were about 23 bucks for two drinks, but wow, they were strong and good. None of the cheap vodka in there for sure. I took a couple clock pics of Sara by the pool. Everyone was dying to figure out what the heck we were doing but nobody was asking. Sara said that people will be curious but they try and act like they don't give a shit. We went through the diner into this other room that is some sort of exclusive place on weekends and such. Sara saw Marylin Manson in there one night. We did a quick scan for anyone noteworthy, but honestly, everyone was so concerned with looking and acting cool...that they were totally bored off their asses. We whould have taken clock pics in the to maybe try and liven them up a bit. We jetted out of there and up the street to this other bar. Right as we walked in the girl (Joey Something?) from Chasing Amy walked by me. It looked like some sort of private party had ended. Sara and I took a couple clock pictures in there. Everyone was talking to this really cute girl, I couldn't figure out who it was. Eventually Sara said that it was the older sister from "Almost Famous". I couldn't get a clcok pic of her due to all the people around, so I had to settle for Sara taking one of me with Zooey behind me.

After leaving that bar we walked up the street to some other bar. We weren't cool enough to get in so we turned around and walked through the hotel lobby. There were all these guys there looking like a Puff Daddy entourage, all on their mobile phones and stuff. There was one dude looking all happy, I didn't recoginze him but Sara said it was Jaime Foxx. I looked him up when I got home and saw that he was on "In Living Color" and in a bunch of other movies.

On Sunset Blvd, I went to get a picture of Sara with the clock and these guys were walking by. They laughed a bit at her and she (working her magic) asked them to be in the photo. They were in the photo, they even let me be a bit bossy and have them to different poses and stuff. They said they didn't have an agent yet..but they would soon!

I spent some time nerding out on Sara's computer and then hit the couch.

This was a long entry because I gained a day flying from New Zealand to LA. About a 19 hour time switch or something. I even had to modify the code for the lunky.com site because when I changed the time in my camera, all the photos from LA and New Zealand started getting sorted together via time. At least it makes up for February 2nd, 2002 which I lost.