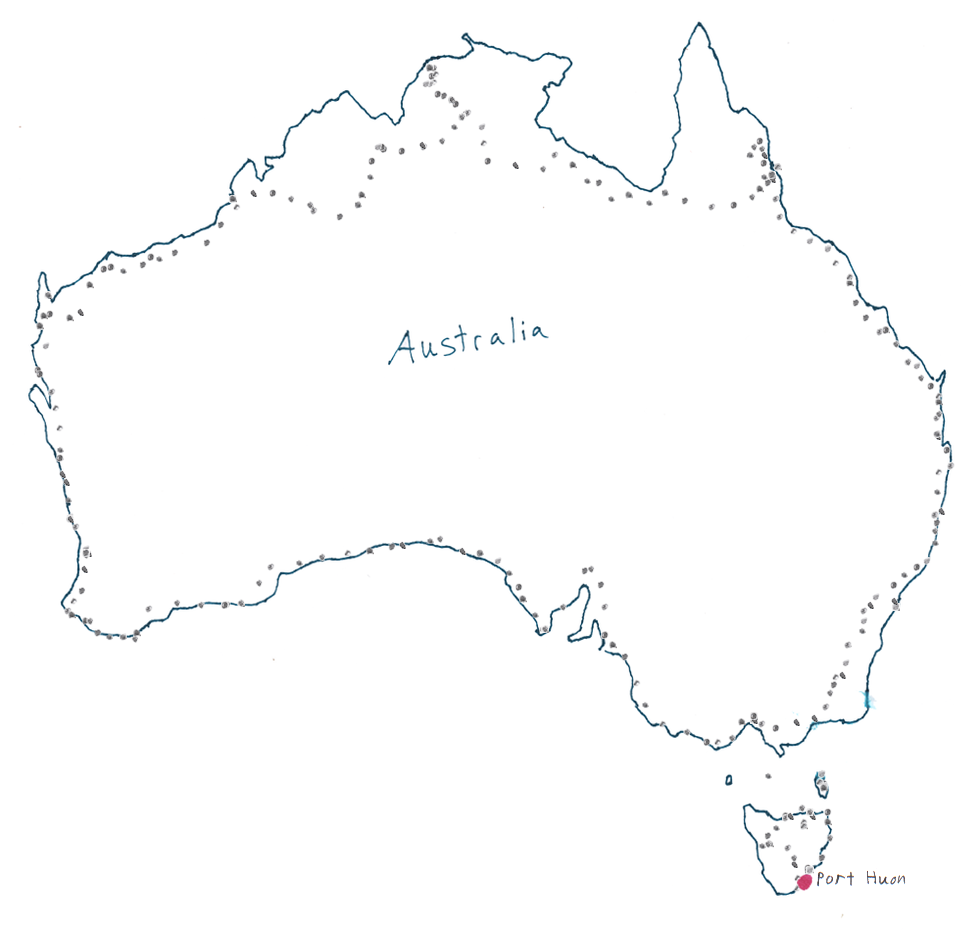 Was up this morning in happyland caravan park. This caravan park is pretty bizarre. It is on a hill with everyone's campervans parked about 2 feet from one another.

I got up early and biked into Hobart, right during the "rush hour". Such traffic. I really wanted to start biking downtown, but I needed to find a bike shop to get a couple tubes and a new pump. I didn't want a repeat of yesterday. I found an Internet Cafe and figured I'd do a couple emails while I waiting for the bike shop to open. I walked upstairs and the lady was smiling. She said..you are our first customer! Apparently they had just moved to a new location. Net access in Hobart is really expensive, about 9 dollars AU an hour. At least here I could actually plug in my laptop here...though I didn't. I haven't been able to plug the laptop into the Internet since I left Portland, so why ruin a perfect record. Funny, I remember stressing when I left about which sized ethernet cable to bring with me, the 25 foot or the 6 foot. I brought the 6, but turns out I have never used it. That is what has been funny about this trip, some stuff I'm really glad I brought, other stuff I didn't know why I did. Checked the clock email...a woman saw Wayne from Flinders Island on the front page and wants me to send her some Vegemite. Maybe I should get into the Vegemite import/export business when I get back.

Went to a takeaway place to get some food. The woman was in a mild state of shock that I didn't need a bag for every individual thing I bought. Guess you can't break habits. Finally got my butt out of Hobart. I had to get on the road. I hate leaving so late in the day but sometimes thats the way it is. I stopped and the grocery store for some food. Hey, if anyone wants to make some money, steal a bunch of shopping carts from the grocery store and send them down here. You see, the trolleys (shopping carts) down here are on 4 free floating casters, unlike the ones in the states where the front two are free-floating and the back two are fixed. They are a major pain in the arse to push . Out in the parking lot I watched people try and push the cart to their car, except the lot was at an incline, so they had to get at the downhill end of the cart and do this sideways shuffle to their car. It was pretty amusing to watch. I should have just got a 6 pack of beer and watched them all day...but I had to bike south.

I biked through an affluent area of south of Hobart. It was a hot day (which they haven't had in awhile) and I saw more cyclists in that hour than I have this entire trip. I stopped at the Shot Tower. I think this was my first tourist attraction of the whole trip. It is this 400 foot tower that they used in the late 1800's to make lead shot for guns. They'd pour molten lead through this screen thing at the top of the tower and as the lead would fall, it would cool and solidify into a perfectly round ball by the time it hit the floor.

The ride to Huonville was pretty rough. I kept finding myself going pretty slow and I was starting to realize I was climbing a large hill. I don't mind climinbing big hills at all...I just don't like doing them when I have to be somewhere. Ended up having to climb two hills about 1500 feet each. It started to rain in Huonville. I decided to make the rain stop so I pulled over and covered my bike messenger bag and the clock in the blue tarps. By the time I had my rain jacket on...the rain stopped as I planned. I put the rain jacket away and moved on.

I passed through this wonderful little town called Franklin. Can't really explain why I liked it...I just did. There were two streets there "New st." and "Old st.". I was planning on heading to a town about 25k south of Huonville where they had a hostel. Before I got to the town with the hostel, I saw some rv's parked near a boat dock and a park. I went in there and discovered it was a camping area. The clouds looked pretty mean so I decided to camp under one of the picnic shelters. I cooked dinner in the other shelter where some other people were. A couple of the guys were from Queensland. There was also this other couple who were on their boat and had sailed down from Adelaide. They had caught some fish yesterday and gave me some for my rice noodle mish mash.

After dinner the rain really started to come down. My oh my did it come down. I got a couple pictures of the constant lightning. It was pretty peaceful staying dry in a picnic shelter while the heavy rain came pouring down and lightning and thunder cracked outside.