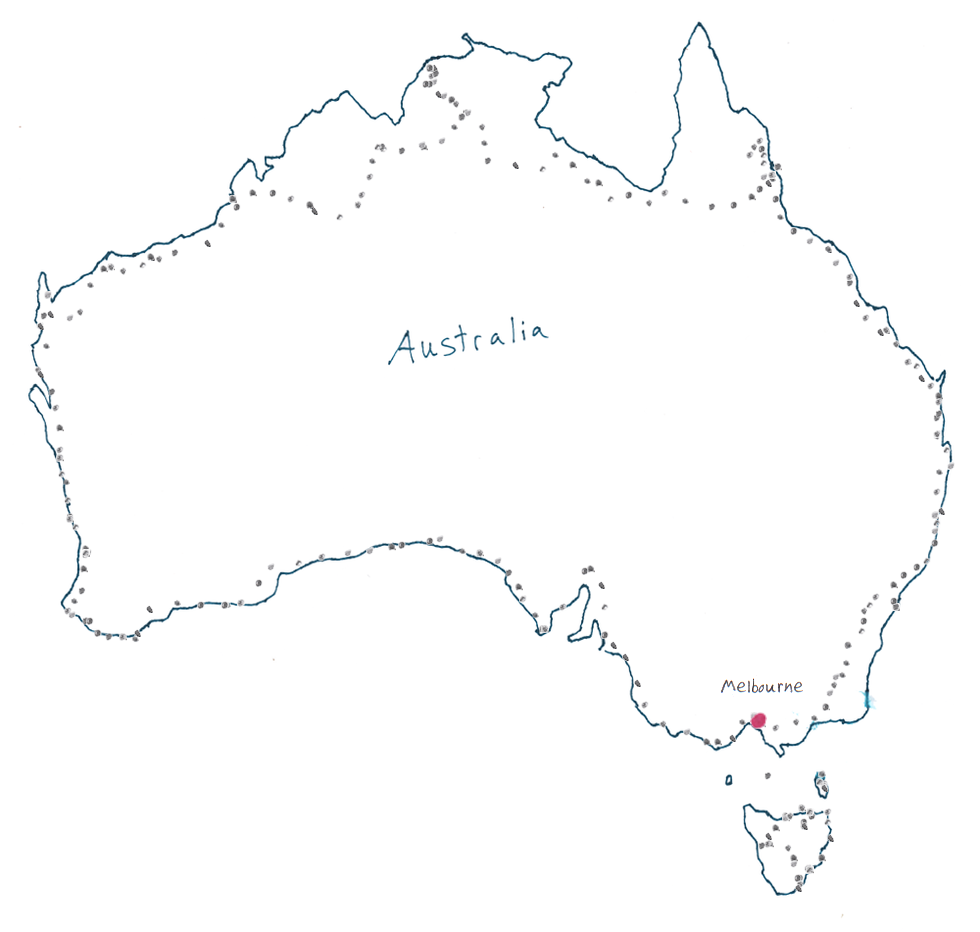 Woke up early in the morning. Grubby was coming over to say goodbye and have coffee. He showed up with yummy raisin bread, but he said he had bought apple scrolls...but they had fallen out of his bag somewhere between the bakery and here. ((thanks man!)

Katrina woke up Rufus so he could say goodbye. This has to be wone of the few cats that sleeps in every morning. Soon we were on our way to the airport. Some guy in the line had a big yellow t-shirt on that read "fuck terrorists" with a big middle finger on it.

I get to the checkout counter and the woman said..."ok, now I just need your tickets". Oh shit. I was supposed to pick them up downtown, but had gone to Hobart right after I bought the tickets...thus forgot to pick them up. A little bit of worrying and calling on Steve's mobile phone like a stockbroker yielded no answers. It looked like I'd just have to take a flight that evening.

I was so tired I could hardly make rational conversation with anyone. Ended up leaving my stuff at the airport and riding back to S & K's house. Tried to sleep but couldn't. Ended up deciding to just catch the train downtown and get the tickets, then take public transport out to the airport.

Said goodbye to Steve and Katrina for the last time. I was so tired I couldn't really make decent conversation to let them know how much I enjoyed staying with them and being fed yummy food (that didn't come out of a packet or a can!).

Got downtown and got the tickets. Caught the train out to the bus stop where the 478 bus was to pick me up. Bought the Woodward and Bernstein book about Watergate at an opshop for 50 cents. After 90 minutes of watching Australian youth interact with each other, I realized the bus wasn't coming. One of the bus drivers said it wasn't going to come till 5:30pm or something. I didn't want to chance it so I just got a taxi to the airport...when in doubt just throw money at the problem.

Got through the ticket counter and customs ok. Took forever to takeoff. First there was an injury on the tarmack while loading the plane, hence a delay. Then a woman changed her mind at the last minute and left the airport, thus leaving her bags on the plane. But the bag crew couldn't unload the luggage to pull hers off since they were working on loading another plane.

The flight was alright, there was some movie on with Sandra Bullock and Hugh Grant on, it was alright. Ironic though in that I'd be meeting up with MCQ and he has a thing for Sandra in a big time way.

Got off the plane, the stewardesses did their usual thing of smiling and saying thank you to everyone, but frowning and grunting when I walked past. Went though the customs and all that stuff. Got my bike and wheeled around the airport. Decided to go sleep in the domestic terminal, bad move. It is a 1 km walk to the domestic termninal..and it was closed. So I push all the crap back to the international terminal and fall asleep on a bench. Wake up, sleep, wake up, sleep.

during the ride back t