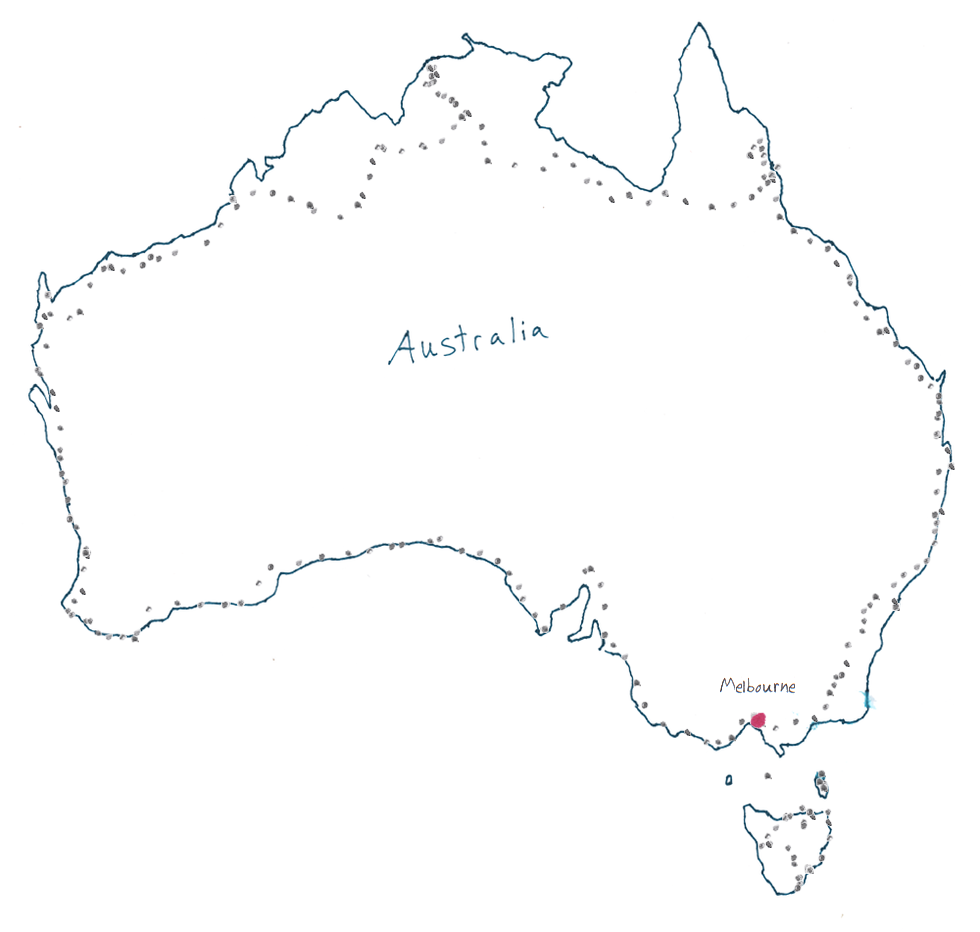 (and probably some question marks: ????)

Couldn't really sleep much in the very early morning, just looked up though the tent at the starts. All the critters were still at work running around going bump in the night. Pulled the tent down around 8am. Made breakfast and farted around excessivly for awhile, mostly for the fact that I could.

The ride though the countryside was nice. Saw several cyclists out for their morning ride. After taking a wide array of road types (pavement, gravel, dirt ruts though a field) I reached Werribie. From here on it would be city-type-stuff the whole way in. Whole ride into Melbourne was uneventful. Got lost on a horribly mismarked bike path. Later on in an industrial area I came upon a truckie pulling out onto the road. Other than me being there, it was clear for him to pull out. I stopped and waited for him to go by me. Right as he passed me I looked up and there was this big burly truck driver inside. He gave me a very strong looking "thank you" nod that was kinda cool.

Awhile later I found myself on a familiar street that being Spencer Street. I was all the way around now. When I reached the bridge I stopped for a second. This is the same spot where I had taken a photo of a very tired version of me 13 months and 9 days earlier. I went to set up my tripod and a couple guys walking by said they could take my picture. The guy stood in the middle of Spencer Street while I posed. I was getting a bit worried about him taking my photo...simply because a mad rush of traffic was heading towards him with no signs of slowing down. He jumped back up onto the sidewalk after his friend pointed this fact out to him.

From here on I was all back in familiar territory. I knew which roads to wind around to get on all the proper bike paths. I found myself looking to see if certain graffiti still existed on walls. Looked for the skeleton looking Angus Young (from AC/DC) painted on a wall near the tram tracks...yup, still there.

Got into St. Kilda for the third time. The second time was when I returned from Tasmania and rode down this same path. Somehow I was a bit more excited that time...I think because it was a lot easier to comphrehend biking around Tasmania than the mainland. Stopped at my favorite pizza place on Grey street and then rode down towards Luna Park. Out from beyond some palm trees popped the familiar clown face. I rode past the Palais Theater, hey...Beck is playing two shows soon. Before I knew it I was across the street and touching the black gate under the clown face. I was all the way around now from the "official" spot. 20,361 kilometers. Some English people talked to me for awhile and congratulated me.

The whole finishing thing was pretty uneventful and unemotional to be honest. It will take ahile, cause I'm somewhere out of Esperance mentally right now when it come to taking in thoughts / feelings / events from the trip. I went to the Olembia house...Dave wasn't there so I left him a big note saying hello. Spent a good 20 minutes trying to find a working payphone to call Steve and tell him that I'd be arriving in an hour or so. Went back, took some more pics in front of the clown...then headed to Coburg.

The ride to Coburg was fast, my average speed was about double. I was passing people along the way. Must have been a bit intimidatig for the racing bike guys when I'd pass them with my loaded up bike.

Reached Steve and Katrina's around 6:45pm...nearly in time for shower and dinner. It was so nice to see them again. We talked and talked...then headed to the corner hotel to see ()? play. That was a good show