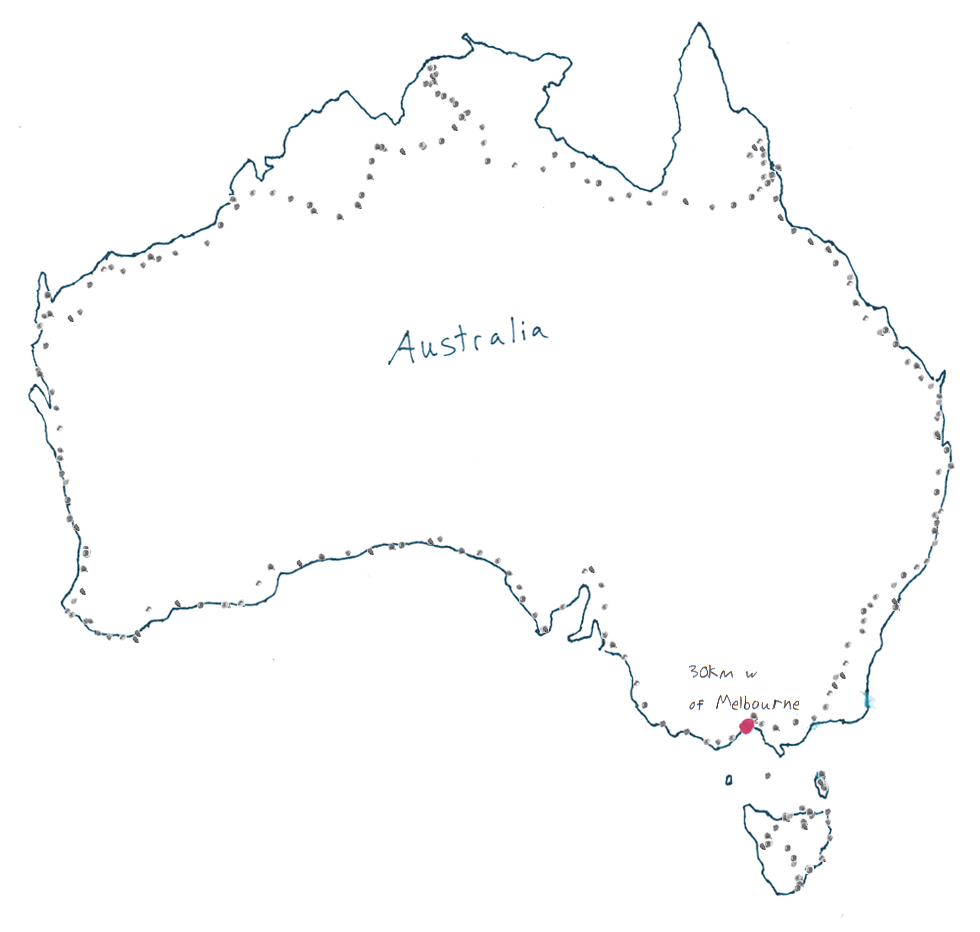 Tonight is the last night out. I'm camped in the Yoo Yangs Reserve Park. The bushes keep crackling with kangaroos crawling over them. I sat up from reading my book and heard a crash-crash-crash sound of a roo hopping away from my tent. Mosquitoes are a bit irked they can't get in my tent.

Last night was a long night. I'd gone out with some Irish guys from the hostel. We got back and I went to my room. Right when I walked in I could hear someone snoring and people rusling about. I climbed into my bunk and tried to sleep. Wasn't going to happen. I climbed back down, kinda noisly got my sleeping bag and thermarest. Went out on the front deck and made camp. A few hours later one of the resident possums was working his/her way over the railing and onto my sleeping bag. It spooked me and I have it a kick, later feeling bad about it. The possum just came back over my sleeping bag again and climbed up the next railing and onto the roof of the hostel. Woke up around 6am to the sound of a very very loud cricket off in the bushes. I just wanted some sleep! It sounded like a buzzer going off and it wouldn't stop. I got up and walked down the hill until I found where the cricket was...and covered it up in some pine needles. It was still buzzing away, but at about half the decibels now.

Eventually I went back to my room and got up around 9am. Took some clock pics of the people from my room and said goodbye to everyone. I spent 30 unnecessary minutes looking for my other wool sock, only to find it in my sheets that I turned in an hour earlier, argh. Anyway, I'm rambling....

Ride north was pretty uneventful. Just a nice windy road along side of the beach. Didn't really feel like stopping anywhere so I kept riding towards Geelong. I wanted a pizza anyway. Got into Geelong around 4pm. Passed a bike shop along the way and figured it might be good to see if there was a good bike route into Melbourne from the west. The guy didn't seem that eager to help me for some reason. I left a bit confused and frankly, hungry. Ended up getting fish and chips, then eating it in a park.

Headed out of Geelong though a very large industrial area. It was finally starting to occur to me that this trip was ending. It almost feels like the rug has been pulled out from under me and I'm done now. I was kind of in that mental bubble for awhile when I looked up ahead of me just in time to see three fuckhead kids driving towards me. They swerved to my side of the road and back at the last second. I love how people here go on and on about the road trains being so dangerous. News flash. I've never had an oncoming road train swerve for me, open their door on me while passing, throw bottles at me, or scream "get a car you idiot!" I flipped the kids off. Shouldn't have but it was more of a reflex than anything. Kept watching my reaview mirror to see if they were coming back. If they did I'd have to resort to the bike lock in one hand and the movie camera in the other. Man I hate young male drivers down here. They either are just stupid or simply the most sexually repressed mammals in the southern hemisphere.

I decided to head towards the You Yangs regional park. I kind of wanted to have my last night out be a bush camp rather than some random carvan park on the edge of busy suburbia. Tomorrow I should hit St. Kilda around noon. It will be really wierd to be there again. Hard to belive that all of these random disjointed memories are all in fact glued together and end up at an oversized clown face at the corner of Ashgrove and Pike? streets.