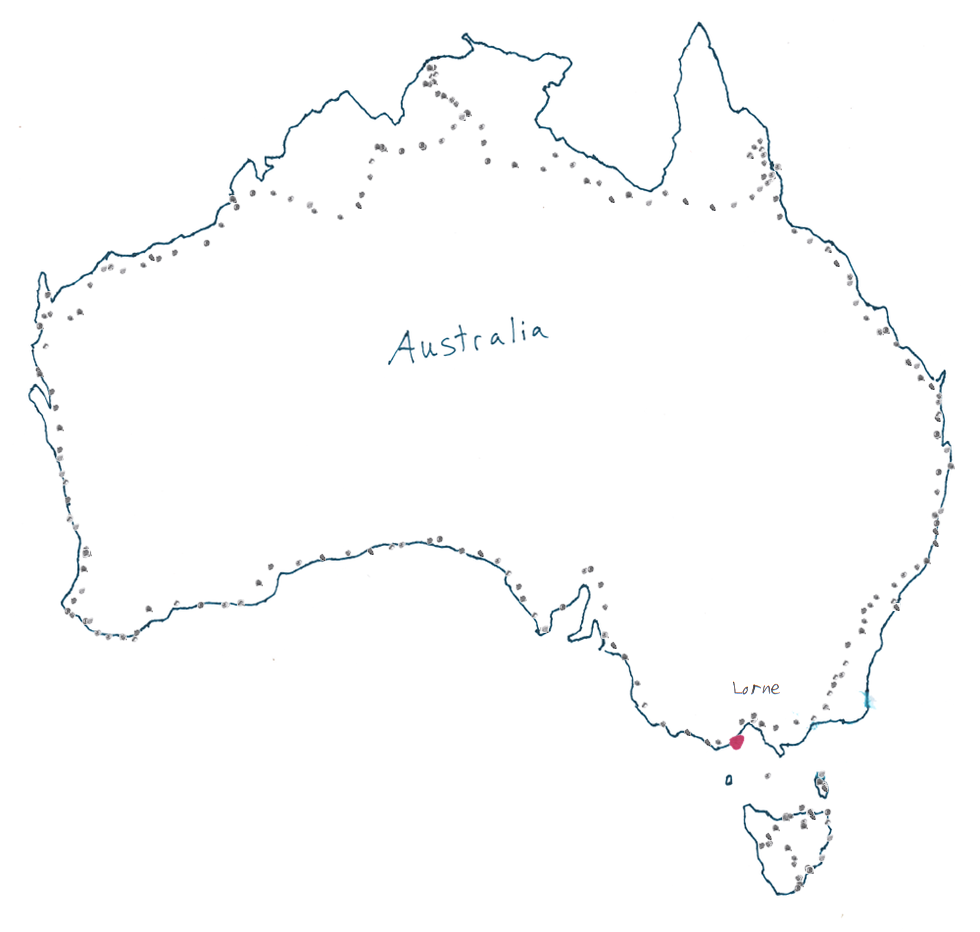 I got up a bit before Rob. It sounded like rain was pouring down but it just was wind. Made some coffee and looked through the magazines in the nightstand of the motel room. Expertly lodged inbetween a women's magazine and a gardening magazine were two JW Awake! magazines...so I grabbed those. Music videos are bad.

We rode a whopping .25km to the bakery down the road. They had amazing stuff. I ended up eating a sausage roll, spinich and ricotta roll, and three peanut butter rolls. We headed out of Lavers Hill around 10am for a flying start downhill. It was to be downhill for about 10km. As we were flying down one hill I said a naughty word and came to an abrupt stop on the side of the road. Rob turned back and asked what was wrong. "I passed 20,000km right outside of Lavers Hill and forgot to notice it". I took a couple pics and we headed on. Had some more hills to climb. Hills don't bother me, just headwinds. A bit out of Apollo Bay we met two oncoming touring cyclists. I talked to the guy for awhile and Rob talked to the girl. They were from Australia. Rob has been riding with just a small backpack. The guy looked at all my stuff and at Rob then asked me if I was carrying both of our gear. I laughed and said no.

We got to Apollo Bay and went to the hostel where Rob was going to stay at. A guy there started talking to me and going into the most dreaded of Nullabor questions/comments. I actually started to get a bit short with my answers. It was mostly because no matter what I said it was never taken as fact. "But there is nothing after Norseman!". If you can get food and water, what else do you need? Argh, I need to save the Nullabor Rant for a sepearate section. He asked about my tires saying I should get new ones. I told him I just put new ones on. "Well, they look pretty worn down if you ask me!", he said. "Uh, that is the way they are made...like car tires you know...flat tread for pavement".

I said goodbye to Rob. I didn't really feel like hanging around Apollo Bay much, I kinda wanted to just get to Lorne so then I could take the rest of the afternoon off there.

It was a terribly windy/blind corner of a road. None of the motorists seemed to get annoyed at me though. The clouds hung above the hills but it was blue sky over the ocean, kind of making for an interesting effect that couldn't be caputured on camera. I drank a lot of water therefore had to pee in a bad way. Found a 4x4 track heading off up the hill so I went on that just a little. I could still be seen from the road so I just angled my bike in a way that I could pee in one direction and make it look like I was just reading my map. Ingenious it was, I freely peed while cars went past me not suspecting the least. But alas there was one problem, I wasn't concentrating on the flow direction and peed over a sizeable portion of my right side front pannier. Doh!

Got into Lorne around 6:30pm. Met the people in my hostel room, nice people from England. My age even! Wow!

I made dinner and talked with some Irish guys and Danish gurls for awhile. We ended up taking a clock picture...then me and the Irish guys went into town for a couple beers.