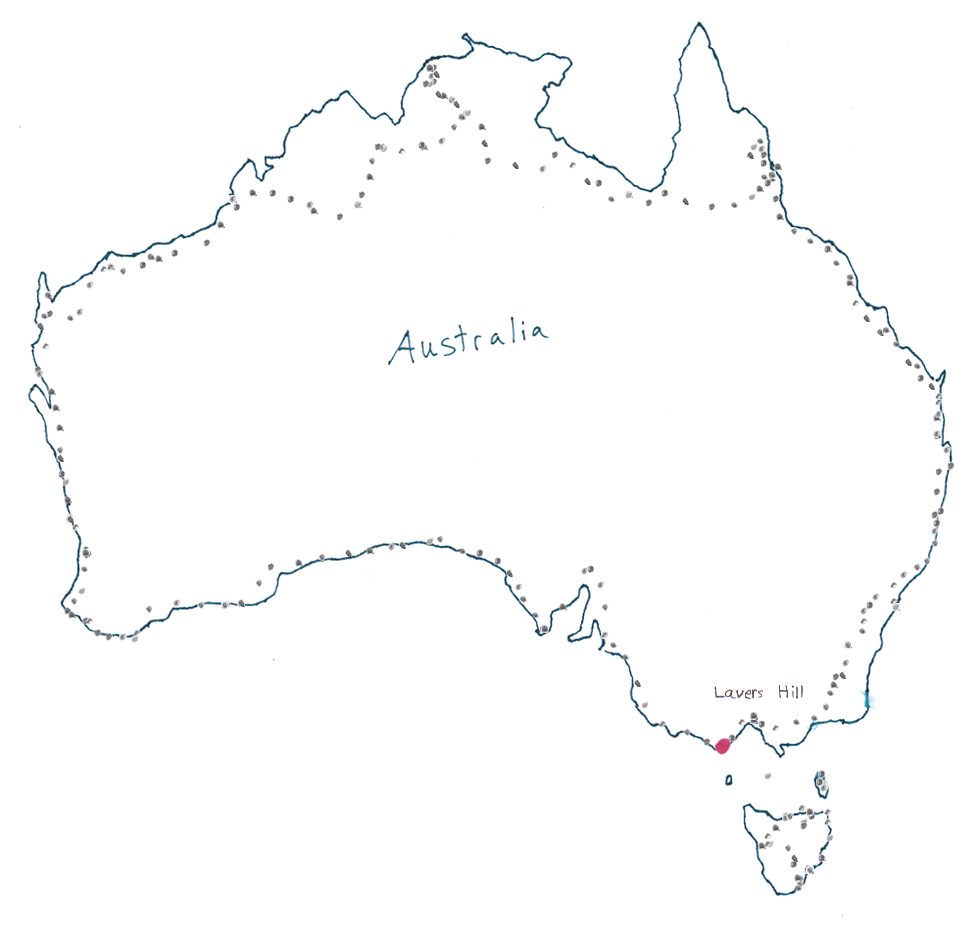 Rolled out of bed around 9am. Doddled around the hostel for awhile, didn't leave till about noon. There was this other guy staying in my room who was also on his way to Melbourne via bike. He's just has a small backpack on though. Doesn't have the 4tunncrap setup that I have.

I headed out of town without much energy, many hills and stuff to climb. Stopped at several of the little turnouts along the way, very pretty and unique here along the Great Ocean Road. Met a cyclist heading west, he was kinda concerned about the Nullabor. Funny how every cyclist I've met heading west is quite concerned about it as if it were the Canning Stock Route up north. Awhile later the guy from the hostel caught up to me and we rode together. Stopped at the 12 Apostles. This is an area where there are about 7 limestone stacks out in the ocean off the coast. There was a huge developed tourist area there. As Rob and I were pushing are bikes on the large walkway towards the Apostles, he kept noting how the tourists just kind of gave us a blank stare. These tourists here don't seem to talkative though, maybe it has to do with latitude or something. Took a couple pictures of the 12 apostles, but I probably took more of the people taking pictures of the 12 apostles than of the 12 apostles themselves. There has to be 10,000,000,000 pictures in existence of the 12 apostles, but probably only about 1,000 picutres of people taking pictures of the 12 apostles I figured.

We continued on and soon arrived and Princetown. Got some food there, including my purchase of a whole package of chocolate ripple cookies. I was very hungry, so the purchase didn't last too long. We decided to take this 4x4 road east. It was a few km shorter, but as I expected it would take about three times longer to bike. (but be more rewarding in the end). Five minutes later we were lugging the bikes though deep sand. After a couple km of deep sand it stopped and went back to a packed dirt track cutting though the bush. It continued like this for awhile. A couple of 4x4's passed us along the way, the one guy just wanted to make sure I was having a good time. I was. I mean, I haven't worked this physically hard in a long time. Pushing the 4 ton bike up a hill in deep sand is a heck of a lot of work. Rob didn't have bike lights so he went ahead to Lavers Hill. I passed some dudes all set up to party for the long weekend. Most of their van was beer. Eventually I was back on the highway, climbing up like a madman.

I reached Lavers Hill about an hour before dark. All that is here is a pub/general store, bakery, and the required Austrlian sports complex. Rob was standing outside a motel door and he flagged me down. Looks like I'm staying here tonight.

We got dinner at the pub after a 400 minute wait. The kitchen playing disc 2 of Pink Floyd's "The Wall". Got ice cream and went to bed awhile later.