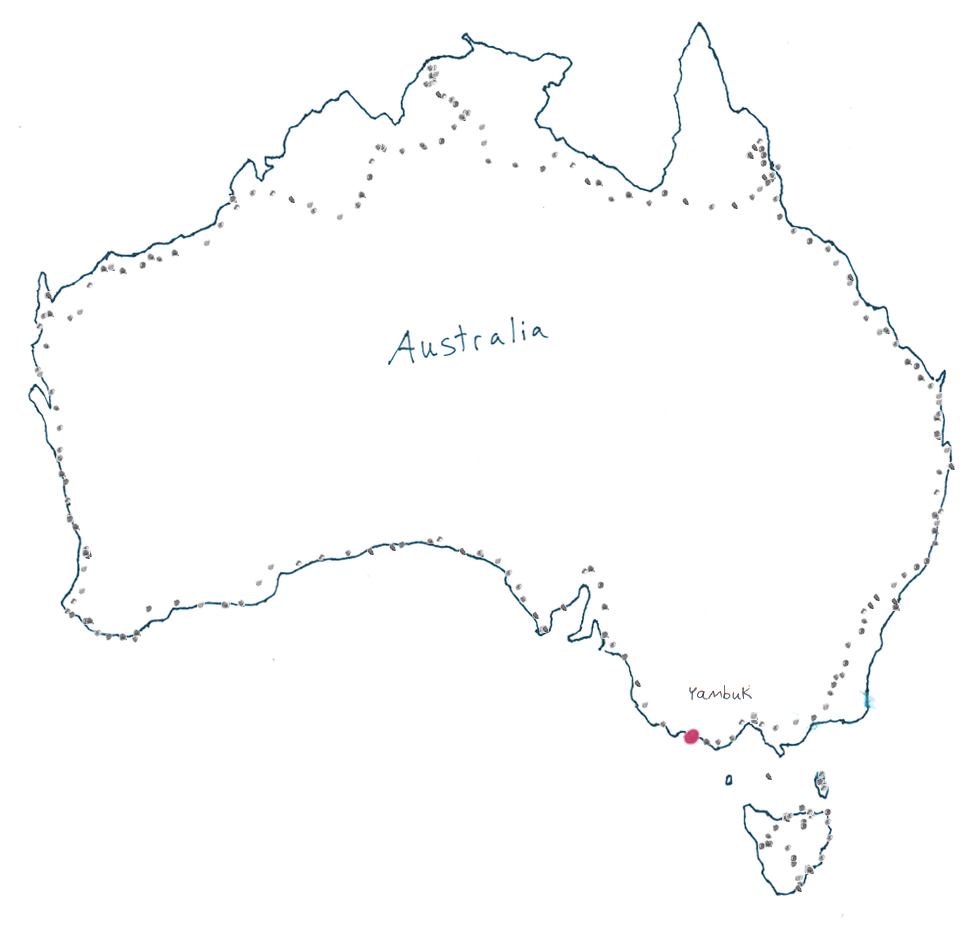 Indeed today I did pass though Portland but did not make it to Port Fairy.

No birds rudly woke me up this morning that was good. Ate breakfast down in the town of Nelson. Nelson is pretty tiny, but it does have a pub with an old dog lying out front next to the road, though. Ate breakfast at this BBQ/play area. There was this little "merry go round for one" in the play area. I took some photos on it while spinning around, then was sick for about the next four hours.

The ride to Portland was pretty uneventful. Lotsa up and down though big tree farms. Many many many semi trucks on the road. Funny how people say the Nullabor is "dangerous" to bike, but personally I found this 100km stretch of road a lot more unnerving than anything on the Nullabor.

Got into Portland in the early afternoon. Couldn't find any "welcome to Portland" signs to take a picture of, bummer. Got food, wandered around town not really doing anything. Went to the visitor's center to find where the Internet was. The guy ahead of me asked where the playground area was. This was followed by "..and where is McDonalds?" Amazing. The girl said that Portland didn't have one, the nearest was about an hour and a half away.

Found the internet at a laundrymat. Good old ports 22 and 23 were blocked again so I had to use my offline emailer. Man, I'll love the day when I don't have to rely on these net cafes that exist solely for hotmail. Duncan from Emu Park is coming to Portland...I should get to see him!

The guy at the laundrymat said that the Port Fairy Folk Festival was going on this weekend. The town has about 2,000 people normally, but he said it swells to about 60,000 for the festival. I had been planning on staying at the hostel for some socializing, but this pretty much put a dent in the hostel plan.

Rode outta town around 5pm. Stopped at the beach to dip my feet in the water, then got back to riding. I think Condingup in SW Australia was the last time I stuck my feet in the ocean, that was about 45 days ago. Had the chance several times since then but never seemed to get around to it.

Saw a huge tiger snake on the road, it was recently departed though. It didn't even spook me. About 10 minutes later I was looking off the side of the road ad when I looked back ahead of me I jumped a little. Coiled up in front of me was...an old piece of rope.

Rode on into the early night. Stopped in the tiny town of Yambuk. There was a hostel here so I headed for that. Booked out solid, they would let me camp in the grass for normal price though. Seems everything in a big radius around here is book. The guy told me though that I could camp in the rest area across the road...it was free and if the cops hassled me there is nothing legally they could do. Worked for me.

I can start turning down the higher distance days now, though I'll probably do 110km tomorrow, but hopefully should have it pretty slack into Melbourne.