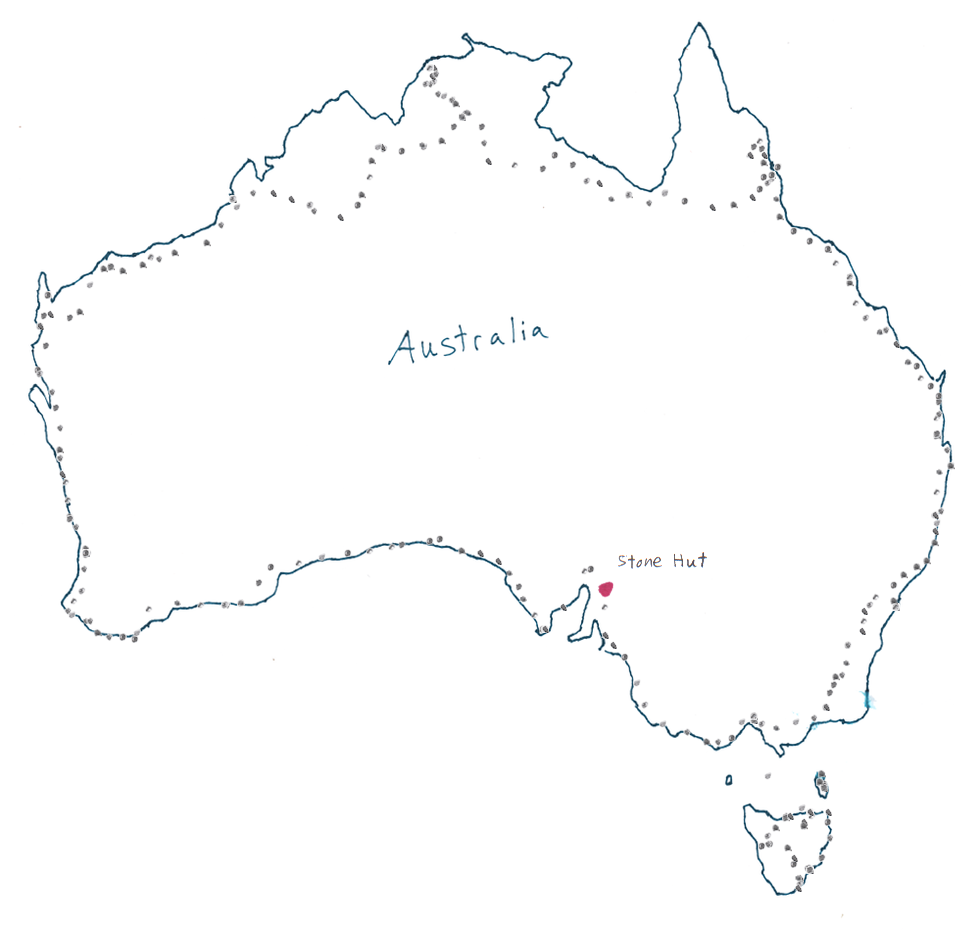 Was up and going before sunrise. The resident birds at the caravan park started chirping so I finally got up after the 15th time of waking up in two hours. (that was a fine run-on sentence). Headed out onto the highway...into the blazing headwind. What a way to start the morning, crappy headwind, crappy scenery, cars cars cars. Only had to go about 15km to the turnoff where the "more scenic" route began. It was a long hour and a half to that junction. Passed a road crew of two people who were mixing up road paint. (this is significant later, I'm just making a note of it here). This scenic route basically crosses over a small mountain range and then heads south to Adelaide. About every 30km or so it will pass though a cute little town of some sort. Best part is that it is inland a bit, so there is not as much headwind. Other bonus is that there are hardly any cars. Anyway...right before the road starte the 600m climb, I saw a tiny road approach from the left. Turns out this single-lane backroad led from where I stayed at last night to here. It wasn't on any map I had, but I felt a bit cheated. Here was this cool little one lane backroad and I had to take the noisy crowded and unscenic one. I felt like I just paid $10.00 for used underwear when the store just down the street was selling new underwear for $5.00. Climbed the hill I did. Just near the top I ran into the road crew fixing a reflector post. We sat there on that corner and talked awhile. Later on at the top of the pass I saw them again. The guy joked that I'd get to the next town faster than they would. This hill has to have been probably the one of the most significant climbs since climbing onto the Atherton Tableland....about 12,000km ago, Australia is indeed a flat place.

Right before I got into Wilmington my front tire went flat. I didn't notice it for awhile and though I was just slow. After pumping it back up and riding...wow, magically I was going twice the speed. Fixed the tire in front of the post office, it was a thorn. This has to have been the first flat in ages. Wilmongton is this tiny little town with a pub, a couple delis, general store, and a toy museum. I paid my two bucks and went and checked out the toy museum. It was basically this guy's toy collection from the past 30 years. All kinds of interesting stuff in there. There were some mens magazines (can't recall the name...might have been "Man") from 1971 in there. The nude women actually looked attractive...not like the McBimbos you see noways. (not that I keep up on this or anything).

Rolled out of town at a pretty decent pace. Stopped in Melrose to cook lunch/dinner and mail some junk home. The post office looked like it doubled as a religious bookstore...that was a bit odd. I think this whole area though here is some sort of Bible belt or something.

Headed on...had a nice sunset. Was listening to Springsteen's "Saint in the City" and right when it got to the line about "I pushed B-52's" I passed the 52km marker on the side of the road. Rode up until it got dark, then found a spot to camp off the road near a fence. It's about 230km to Adealide from here, so I'll probably step it up a bit tomorrow.