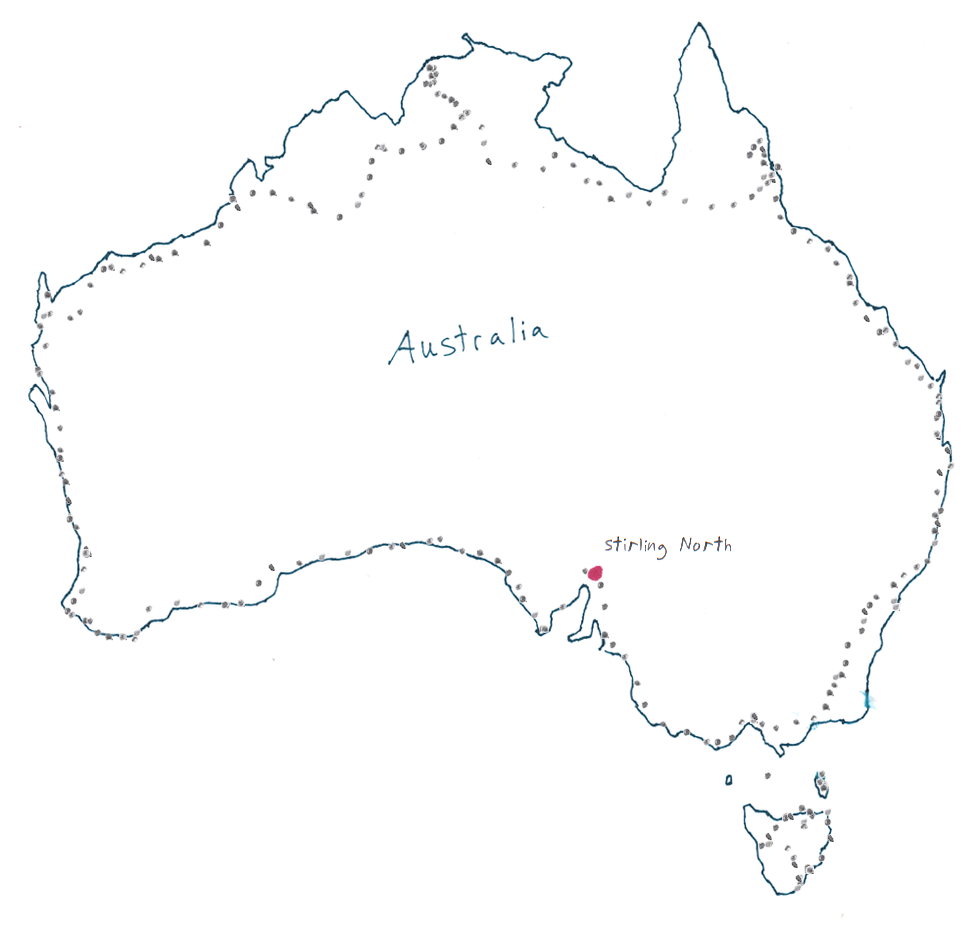 Whew, what a day. Only went about 45km today but felt like it was double that. Yesterday wiped me out a bit so I was dragging all day today. Got up around 10:00am, sleeping in my ditch next to the railroad tracks. A train came by around 8am waking me up, but I wanted my sleep. Before I left I spent a good half hour walking around the five huge water tanks taking pictures of grafitti.

Had a pretty fast ride into Port Augusta. It was hot and a tad humid and I had no water. Stumbled around Coles (grocery store) for awhile and bought some stuff. Hung out in the city square park eating and then sleeping. A guy came up to me and asked me how the bike trip was going. Turns out he was touring too. He said he'd done about 9000km so far and seemed to be travelling fast. He asked how many k's I was doing a day in the outback. I told him about 100-120km. a day. "That's it?", he said. Oh great, one of those competitive types who just ride ride ride all the time. "How many kilometers have you done so far?" "about 19,000", I replied. "Oh" he said.

Went to the library to do net, it was booked up till 5pm. At the visitor's center it was absurdly priced at 10 bucks an hour. I hate towns that do this. Back to the library I went. Got online...had to keep switching floppies between my laptop and the library computer to send batches of mail. I'd get a batch done, send it off, then remember I needed to send someone else some email. Dang firewalls. Maybe it is time for a web interface to my email, only been meaning ot install one for about a year now. Read though my mail. Got an email from Luke and Lee-Ann in Elliston at the bakery. I wanna go back there and see them at some point.

..and there was an email from Katrina in Melbourne. She told me I might want to make it back to Melbourne by the 13th since Mr. Richard Buckner was playing two shows. I got giddy like a schoolgirl. From that point the whole trip has clicked into place. This was about the time I was planning on getting back to Melbourne. So now if I stay on schedule I'll get back just in time to see one of my favorite musicians play...a nice way to end the bike tour. It'll be funny seeing him down here. I know he remembers my face (I had his domain name for awhile, long story), so he should be a bit suprised. I originally thought Springsteen was going to end the tour...but I'd rather see Richard since the show will cost about 80% less and I'll get to be a few feet from Richard (rather than a few miles in the case of Mr. Springsteen) Wow, all that Richard Buckner preaching I've done on this trip, never thought I'd get to see him down here.

Met a guy on the way out of the library, he invited me to his place for coffee. We walked across town to his place, but I told him I was just going to head to the caravan park and sleep. He told me that Port Augusta has the highest crime rate in Australia. It did seem like a hole a bit here.

Looking to be in Adelaide by Thursday, which means I gotta get up and get scooting early tomorrow.........