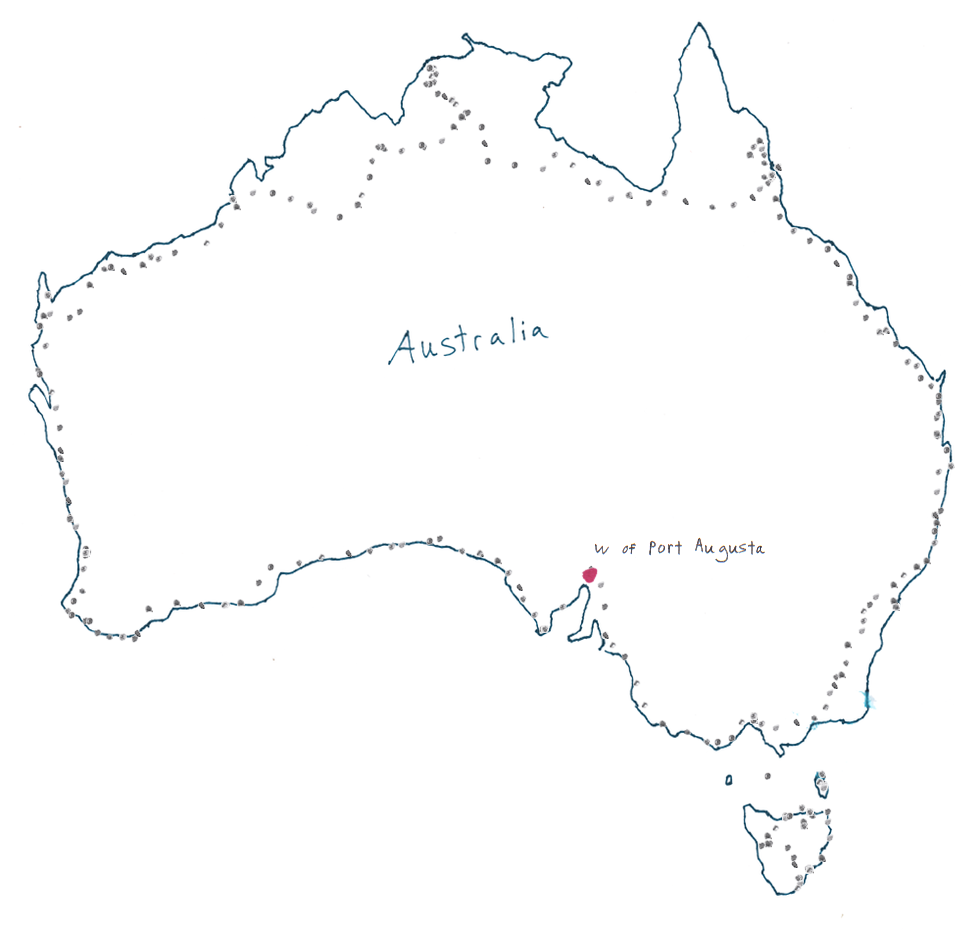 whew, what a day. Actually biked a 204km day today!

Although I wanted to get up early to try and do a 200km day, I ended up and about at the normal time. Had a large horde of ants and flies join me for breakfast. Wasn't feeling excited or down...just kind of getting ready for another days ride.

Took a longer route into Cowell via a dirt road. This was a nice change from the highway. It passed though a tiny fishing village of Port Gibbon. This place was a bit unique in that they had a big sign saying "free camping" and there was a public water tap there Obviously there are no caravan parks nearby. Cavan parks hate free camping areas for obvious reasons.

Went to ethe bakery in Cowell and headed off. Some jerkwad teenagers passed me, then I saw them closing their car door. I kinda get tired how everyone tells me to look out for road trains...the road train drivers are the best out there, it is just these young (and male) drivers you have to watch out for. Anyway I was having a hard time getting motivated...was riding slower than yesterday for one. At about 70km I stopped for awhile to read and try and take a nap. I figured Raelene would be driving by at any time...sure enough, about five minutes later she pulled up. We talked awhile and she gave me yummy chocolate.

By this point it was 3pm in the afternoon and I hadn't even gone 75km, so it looked like the 200km day wasn't going to happen. The sun ended up coming out and the road started going downhill. One of the reasons I had been going slow was because the road was steadily climbing to about 225m. I had Nirvana on and that got the body a-working. After about the 110km mark I decided I'd just go for it...knowing I'd have to ride for a couple hours in the dark. I stopped at a nameless fast food place in Whyalla and got some dinner. The kid working the drive-thru window sneezed all over the open till, it was a bit amusing.

Triple-J was playing a lot of interesting stuff on the radio...I wish we had something like this statoin in the US. I rode rode rode though the night. During the course of this part of the ride, there were probalby only about six cars going my direction. This was nice because I hardly had to get off the road.

I passed the 200km mark and looked for a place to camp. Ended up finding a spot between some train tracks and five HUGE water tanks. (oh, and a creaky water-windmill to boot). The water tanks are of course covered in grafitti, so I should have some good pics tomorrow.

I'm kinda diszzy and spacey right now, so I gotta get to bed, wonder what time I'll wake up.