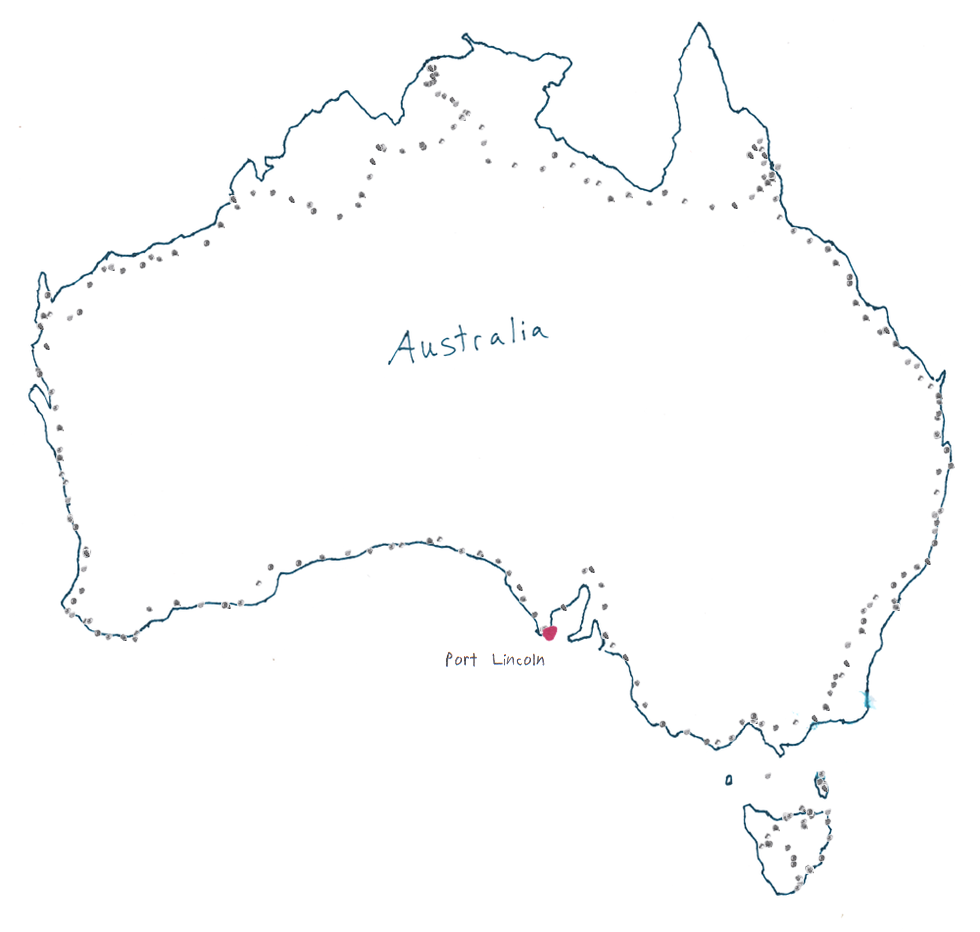 Woke up amongst the pine trees this morning. Made some quick coffee before heading out. Had to take some pics of the potty, funny vandalism on it. Headed into Port Lincoln. There is a jewelry store there "Ween's Jewelery Store." I tought that was kinda cool, since Ween is a good band. Ate at the bakery and then went to locate the bike shop. Turns out I basically rode past it on the way into town. The guy there Ross was pretty nice. I told him about my frame and he fave me a worried "oh dear!" He called around and found someone that could fix it..so I biked up there. It was this metal shop ran by this guy Ian. Turns out he could weld it up, so I had to spend a good 20 minutes cutting off all that duct tape from the frame. Turns out that the frame had broken even more and it was barely being held together. Had to go get the crank puller from Ross, so I pedalled back there unloaded and he gave me a ride back to Ian's. Ian spent an hour or so welding it up. We talked awhile and I was soon off. Did some internet and bought vegetables. Headed out and down towards the port area of town. Really needed to tinkle due to all that orange juice I drank, so I headed towards the public toilets at the port. Yes, I'm obviously going into a lot of useless detail, but it was a very significant tinkle. When I came out I got on the bike and tried to figure out what to do next. Should I stay here in town, or ride up the highway for a couple hours? Should I get food? Right then a businessman comes running over to me. He asked me where I was headed and whatnot...how long I was in town for, etc. He said his wife was a "mad cyclist" and that he saw me ride by in front of his office and he quick called his wife to say that he saw a bike tourer. He offered me a place to stay at their house and I kindly accepted. Wow, how fast stuff can change. One minute I was standing under a cloudy sky trying to figure out if I should stay or go, the next minute I was planning staying at the nice home of a couple.

I biked to their house and met Kingsley and Raelene. We talked and talked about everything, then went out to dinner. We were meeting some of their other friends there...turns out two of the people I'd met on the street up in Elliston, what a small world. Had a nice Italian dinner and then came home. Looks like I'll be staying here a day or two and then heading up the coast. Raelene reminded me that Springsteen was playing in Melbourne next month...looks like I might make it if he is there at the latter part of the month. That would be a nice (and fitting) way to end the trip around Australia.