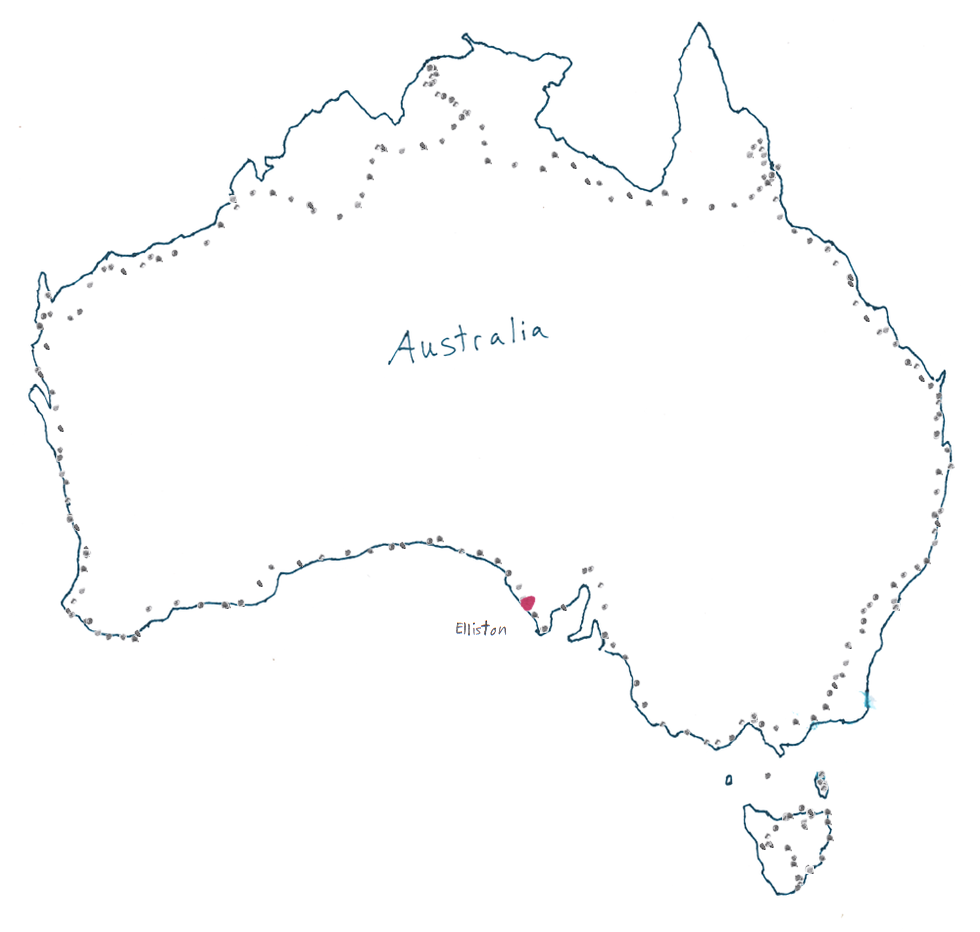 More on last night....After I wrote the last entry I went over to the pub. Had a beer there. I was just starting to think about leaving when a guy recognized me. He'd seen me in front of the general store in Smokey Bay a couple days ago. Funny, I remember seeing him there also...and now two days later I met him. His name was M.V. I found this to be very easy to remember since "mv" is the UNIX command for moving a file. He introduced me to a bunch of people, sheap shearers and carpenters. Everyone kept giving me beer so I ended up drinking a lot more than I planned. He told me that Manny at the bakery was having a birthday party tommorrow and I should come. He also told me he'd swing by in the morning and drive me around the coast to show me around.

Now today (although I'm writing it on the 16th, shh). I ended up hanging around the caravan park and town till around 2pm when MV came and picked me up. He drove me around the area, really nice place here. Ended up going to his place out in the country. He told me the story of how when his family was living in Adelaide, their heeler dog got loose. This all took place as they were getting ready to make the big move to Elliston. MV went though all the usual channels of putting ads in the classifieds and such but nothing turned up. So they get moved out here to Elliston and a few days later they get a phone call. Turns out this guy had found the dog. So MV had to spend all this money to get the dog air-freighted to Port Lincoln, then he had to go drive a couple hours to go pick up the dog. The funny part of the story is that the guy who found the dog had a bakery. The guy also drove a Porsche. So apparently the heeler dog was living quite the high life eating meat pies and riding around in a fancy Porsche all day long.

Towards the evening I went and got some beer (6pk VB 375ml stubbies). Went up ontop of the hill and caught the last of the sunset. I went to the bakery a bit later and had some yummy lasagne. I hung around there for awhile then caught a ride with this nice guy named Shane up to where the party was. We mostly sat around, drank beer, and ate pizza. There was probably about 15-20 people there at one point. There was this one guy there named Ricardo who told me that "having a war to bring about peace is like having sex to try and get your virginity back". Oh, and "Life is like a garden...you just have to dig it". A few of us ended out on the front porch. Luke and Marty had their guitars and were playing all kinds of songs. Ricardo was playing the harmonica and we were all singing along. I remember doing Pearl Jam songs, Nirvana Songs, PJ Harvey songs, and a really nice version George Micheal's "Faith". So many I can't rememeber though. My only contribution was a half-assed missing-half-the-chords version of Uncle Tupelo's "Gun". We all ended up talking and I didn't get back to the Caravan Park until about 4am.