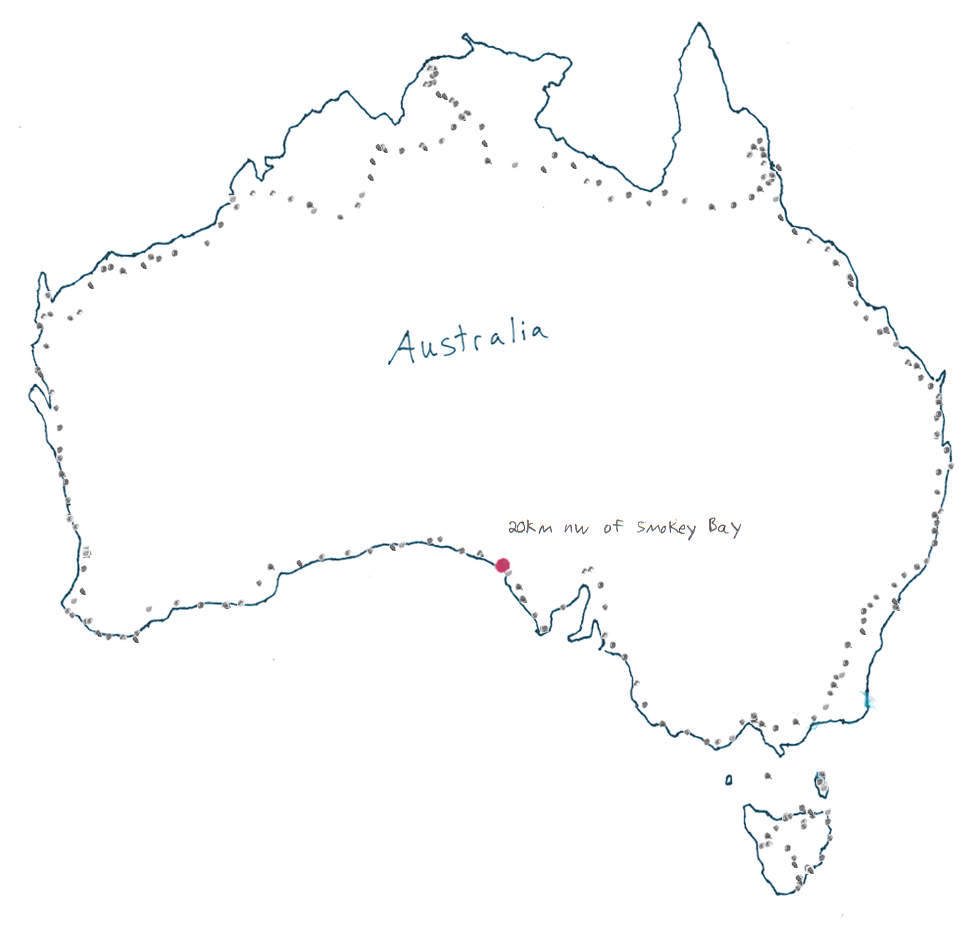 Got up around sunrise, or at least I think it was sunrise. Bright orange light were shining though the cracks of the tin shed I was sleeping in. Made my coffee and cranked out some more emails. Gave Simon some Nullabor tips (carry more junk food!). MCQ is in New Zealand right now, will be good to meet up with him. He just discovered that ketchup is tomato sauce here. I let him in on the 411 that "Zee" is pronounced "Zed" here. Anyway, went and said goodbye to Jim, he asked me again a lot of the same questions he asked me last night. I left not long after he did.

The ride to Ceduna was pretty uneventful. Met some Aboriginals from Yalata on the side of the road. Their car had broken down and when they got back to it someone had jacked the battery and tools from the car. The one guy just said "yeah, there are a lot of stupid people here." About an hour later both cars passed me again with everyone waving as they passed me

On the road about 10km out of Ceduna I noticed this strange popping noise that I couldn't make out on my bike exactly where it was coming from. As I neared the fruit inspection checkpoint, I heard a horrible noise in my front wheel. Turns out one of my headphones had worked its way out of my handlebar bag and into the front wheel, where it was beheaded by a few of the 36 spokes. I don't know which spokes did the evil deed though. I'd had these headphones all the way since Sydney, couldn't believe they'd lasted for this long. I still have some from the Chickenfeed bargain store in Tasmania, except they sound like amplified cardboard. Oh well.

Rocked on into Ceduna, a town of about 4,000 people pretty much out in the middle of nowhere. Had I been here around December 4th, there were about and extra 10,000-15,000 people here for the eclipse. Place must have been a zoo.

Went to the store and blew $55.00 on food...mostly for the fact that I was a bit overwhelmed by all the choices and the super low prices. This was a welcome change after spending two weeks on the Nullabor where the selection (if any) is priced at about 2.5 to 3 times what it costs in a normal store. I made history today by purchasing my first jar of Promite today. It is like Vegemite, but a bit sweeter. Also got chips and salsa after a 60 day hiatus.

Packed up the food, went and sent off my email. Went to the police station to drop off a truckie's logbook I found on the highway. I don't know if it was lost or thown out the window. From reading "Big Rigs" and "Owner/Driver" at all the roadhouses, the logbooks aren't well liked. They have to record down all their driving time and all of these details...seems to get a bit hectic. Anyway, the police woman thanked me and said "yeah, they are always calling here saying they lost a logbook"

Left town around 6pm. Got about 10km out of town and was having a decent ride. Not much wind nor traffic, now that I'm off the main highway. As I pedaled I kept hearing the chain drag on the front deraileur. I looked down and the crankset kept bowing in everytime I'd pedal. Oh oh. I hopped off the bike and looked above the bottom bracket. Yup, the frame was totally broken at the bottom bracket, just the welds on the right side holding it together. Like the last time this happened near Darwin, I just ate some chocolate and was glad that it wasn't a flat tire. Thought about what to do and just decided to give it a good duct tape job. Hopefully it will hold together till Adelaide (or Melbourne) where I can get it TIG welded. It has a nice remidial punk rock 070 look to it right now with all that tape. This is still the same roll of tape that I found on the side of the road in North Queensland.

Continued on and turned off the road to Laura bay. Went the 3km down the dirt road, not much at the bay. Was hoping for a nice beach to camp on, but this was just a smelly cove. Went back aways and camped. The mosquitoes are terrible right now. Just yesterday I was thinking about getting rid of my mosquito repellent since I haven't used it in about 4 months or so. Looks like I made the right choice.

Tomorrow I'm pushing south down the Eyre Penninsula. Hoping to get to the bottom at Port Lincoln before the weekend, this way I can hopefully have a tailwind up the other side to Port Augusta.