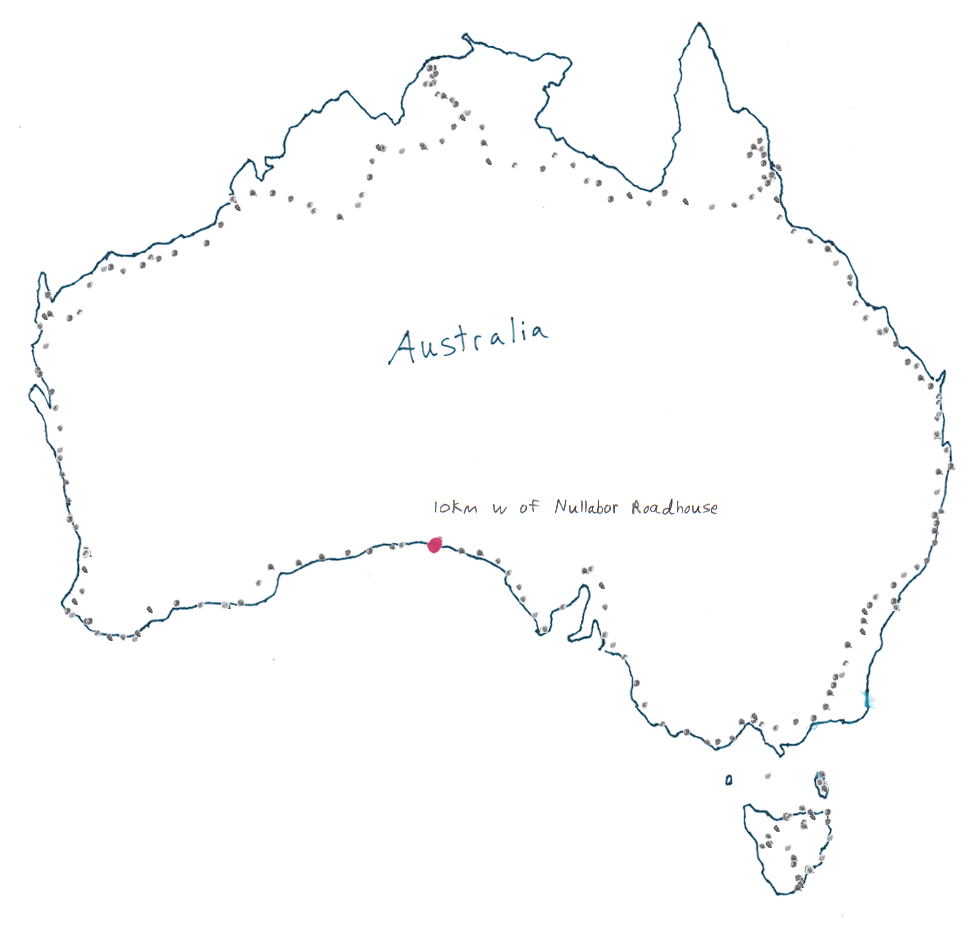 Got up before sunrise just as the day was starting. Had a morning breakfast of milkless coffee and about 1 litre of oatmeal.

The ride for most of the morning was pretty uneventful, just a lot of riding with nothing as far as the eye can see. The headwind was still there, just not as bad as yesterday. There are these little parking areas that go out to the edge of the cliffs...so I went out there a few times. Amazing how this whole cliff system goes for something like 300 miles and drops 300 feet down to the raging ocean.

After about 50km I ended up stopping for lunch at another parking area. It was really windy. A couple offered me a sandwich. (yummy veggies). Talked to them awhile, nice couple. I was still a bit hungry afterwards so I fired up the stove right next to a trash can for shelter. As I sat there awhile later eating my rice, another couple pulled up and talked to me. They gave me some honey since they were heading into Western Australia in another hour or so...and taking honey into WA is a big no no.

Rest of the day was pretty slow and uneventful, broke another spoke. I think it is time to just take all my good spokes and replace these crappy SAP ones once and for all. Ended up deciding to just push for the Nullabor Roadhouse which would make for a 130km day. After about 110km I decided to just look for a spot to camp and bike into the roadhouse in the morning. There isn't much for trees out here (hence the name), but there were large clumps of bushes every KM or so. The next set of bushes that I pulled up to looked to be the last ones for awhile. I saw tire tracks running around and got a bad feeling. I rode out to the bushes in the field and saw a campfire pit with some trash everywhere. I didn't want to camp there, so I went down further a bit. Sure enough as I guessed...there were all these little clumps of toilet paper popping up everywhere like little prarie dogs. I said a word of the obscene (that also served as a very accurate description of what I was seeing). I continued down the highway, deciding to just push it to the roadhouse. The sun went down and I could see the lights of the roadhouse way off in the distance. I ended up turing off about 10km before the roadhouse and camped near some bushes. At least it will make for a quick morning to the roadhouse.

Gonna buy me some Tim Tams when I get to Ceduna, that will be a worthy present..