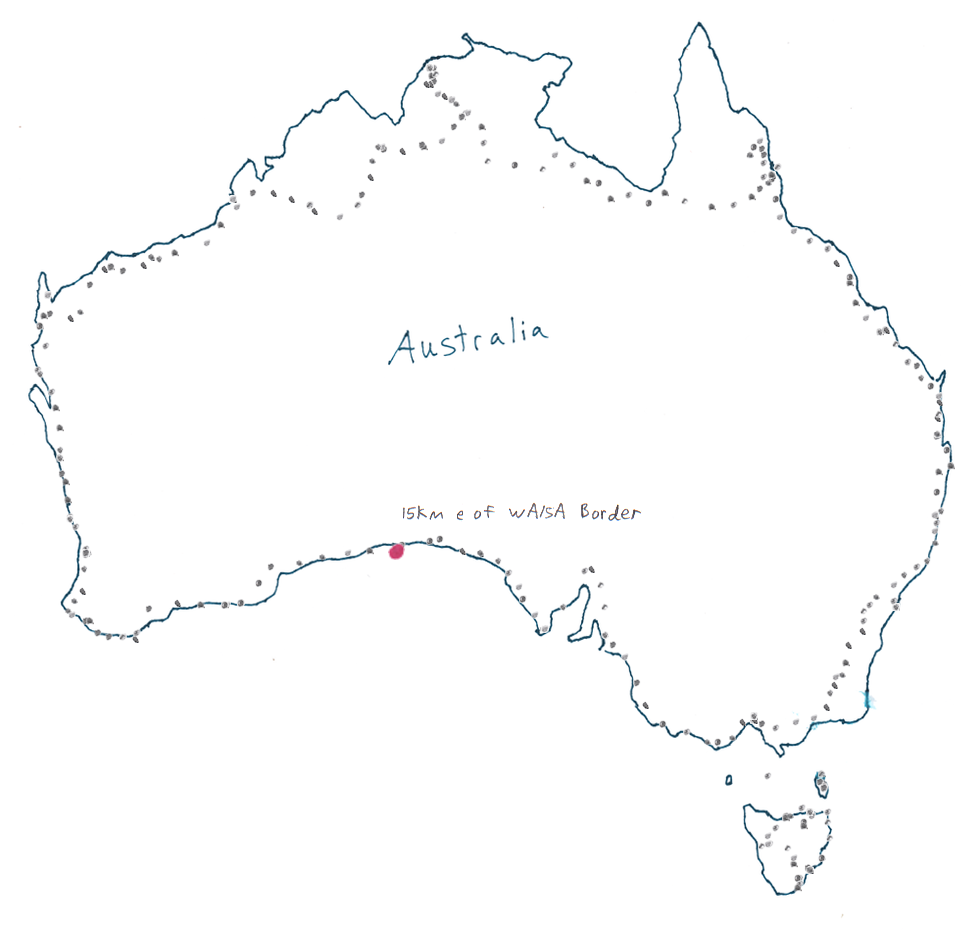 Woke up in the early AM again, the rain was coming down. I popped out of the tent and shut the electrical stuff off. Wasn't in danger of getting shocked, but it was a bit unnerving. Fell back asleep, body demands 8 hours.

Got up later though, ended up making breakfast and spending a good hour working on the new PCT planning program (on paper). Couldn't get that Dan Fogelberg song out of my head, the one where he meets and old girlfriend in the store and they drink beer in the car. Talked to John the truckie for awhile, Daryl was still asleep so I didn't get to say goodbye to him.

Today marks my one year anniversary of being in Australia, can't believe it has been a year.

I eventually got going, had a tailwind again. Found a bike tire along the way. Looks like it fell off of another tourer's bike rack or something. I"ll take it to Ceduna, or at least until I find another bike tourer on 26 inch wheels. Saw somehting in the bushes, it turned out to be this 1989 era Jehovah's Witness book aimed at teenagers. It kinda riled my stomach to read since it contradicted itself and I didn't agree with everythig in it. The pictures were quite a hoot though. I put the book in my pannier and continued on, figured I could use the pictures for something. AFter about 2 minutes of biking I chucked the book back into the bushes, it was creepin' me out just a little to much. This has to be the first publication for young people I've ever seen that leads them away from going to college.

Made it to Eucla in the early afternoon. Got some junk food and talked to a few people. An Irish couple about my age gave me some produce... quarrantine checkpoint in Ceduna, so everyone is offloading their produce. Turns out this one car that passed me had hit an Emu. I remember the car passing me, because it had two bikes on the back and they made out a new license plate with cardboard and put it over the bikes. They had passed me about an hour before I reached Eucla. Somewhere in that hour an Emu jumped out of the bushes and ran straight into their car. It totally demolished the front of the car and most of the windshield was cracked. There was blood and feathers all over the car. (No pictures.....I didn't feel lke taking pictures of someone elses major problem). I've seen Emus before cross the road, they just rocket out of the bushes and straight across the road to the other side. All you see is this big periscope neck crusing through the brush.

Anyway, I got moving again and was at the border an hour later. Took the requisite pictures. Crossing a border like this on a bike is a major event. I mean, I entered Western Australia way back in October. Got food at the roadhouse there. The internet was 24 bucks and hour and it was crappy Orwellian internet where you can't really do anything outside of Hotmail.

Took off and down the road I went. After about 15km the road went right out to the coast.... the Great Australian Bight. This is where there are these big rock cliffs dropping all the way down to the ocean. If you see pictures of it from the air, it looks like someone just ripped the continent away.

I'm camed right now near the ocean out in the bush. Stars are out, hopefully it won't rain. Wind is a blowing and I'm a going to bed.