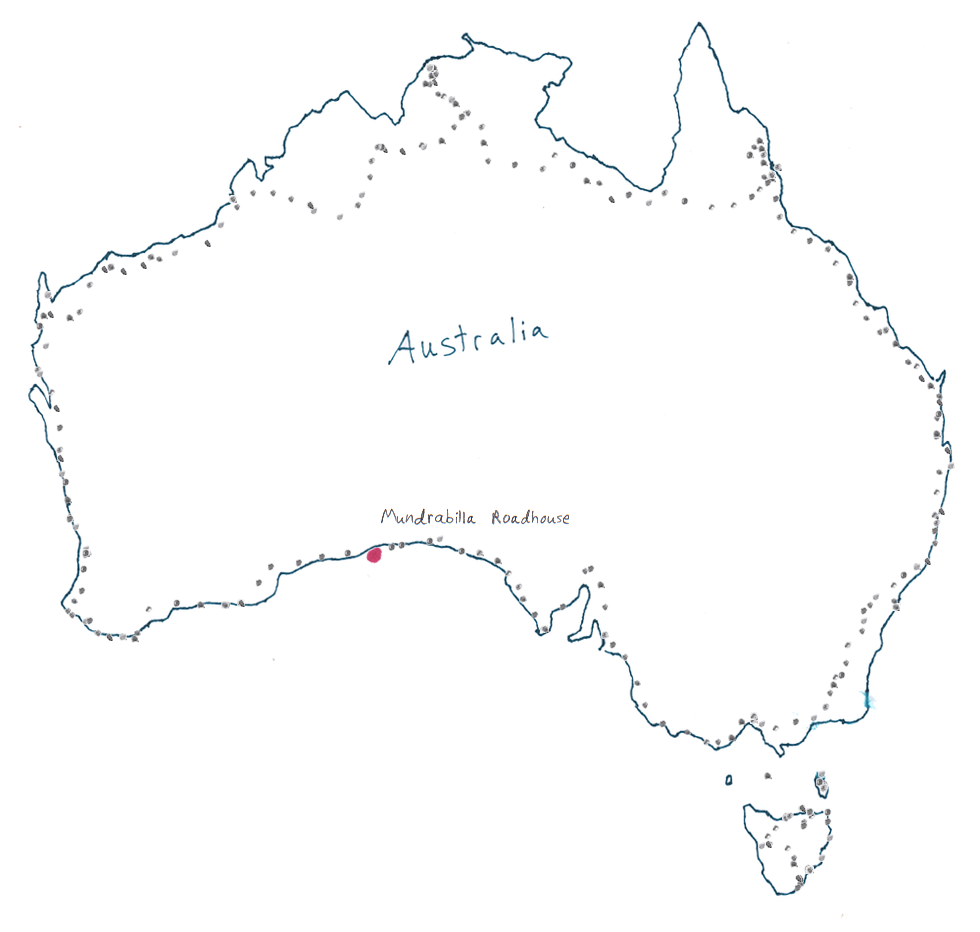 Woke up about 2am, rain was coming down. Not hard but enough to soak everything in about 30 minutes. Put the rainfly on and covered stuff up. Woke up again and actually made it out of the tent around 8am. Just packed up and left, figured I'd stop for breakfast at the rest area 20km ahead with a water tank.

Actually had a nice tailwind so the ride went fast. It soon looked like this cruddy map I got from the Esperance tourist center wa indeed cruddy, the rest area with the water tank did not exist. I kept on biking, nearly stopping a couple places to make breakfast. Ended up not stopping cause there was a lot of crap lying around and I didn't feel like spending any time there. After about 3 hours of riding (on no breakfat or (gasp) coffee) I decided push anouther 40km to the roadhouse and stop there. Ended up at the roadhouse a couple hours later. This is the first time I think I've done a full days ride before breakfast!

Didn't really know yet if I was continuing on or not. Looked like rain was coming and I wasn't in that big of a hurry to bike onward. So I just ordered a bunch of bad food and read 2-3 year old gossip magazines. (Did you know Madonna has boxes and boxes of shoes she hasn't even worn?)

Fixed three broken spokes on my rear wheel. I think I've changed most of the 18 on the non-drive side, so this should stop happening. Each time one breaks, I put on one of the stronger ones in place of it. (as a side gripe, the spokes I specifically asked for three times while they were building the wheel, argh).

Talked to a truckie named Darrel (or Daryl...hi if you are reading this). We swapped some good biking stories and the like.

By late afternoon it looked like I wasn't going anywhere so I got a campsite and set up stuff. I had to charge batteries, but the power poles were out in the open...and it looked like it was going to rain. Ended up setting up near a pole and running all the wires into my tent.

Had a couple beers and caught up the travel site on the laptop. Ended up going into the bar and talking with Daryl again, this time getting a clock picture of him.

Soon I made my way to my tent and did some odds and end computer stuff. It must have looked a bit funny burning a CD in a tent with the sky looking like it was going to rain. I soon fell asleep, my batteries all charging a couple feet away from me. Hope it doesn't rain, otherwise I might have some bad electrical issues to deal with. I have a sneaking feeling that these garbage bags probably don't pass as certified elecrical conduit.