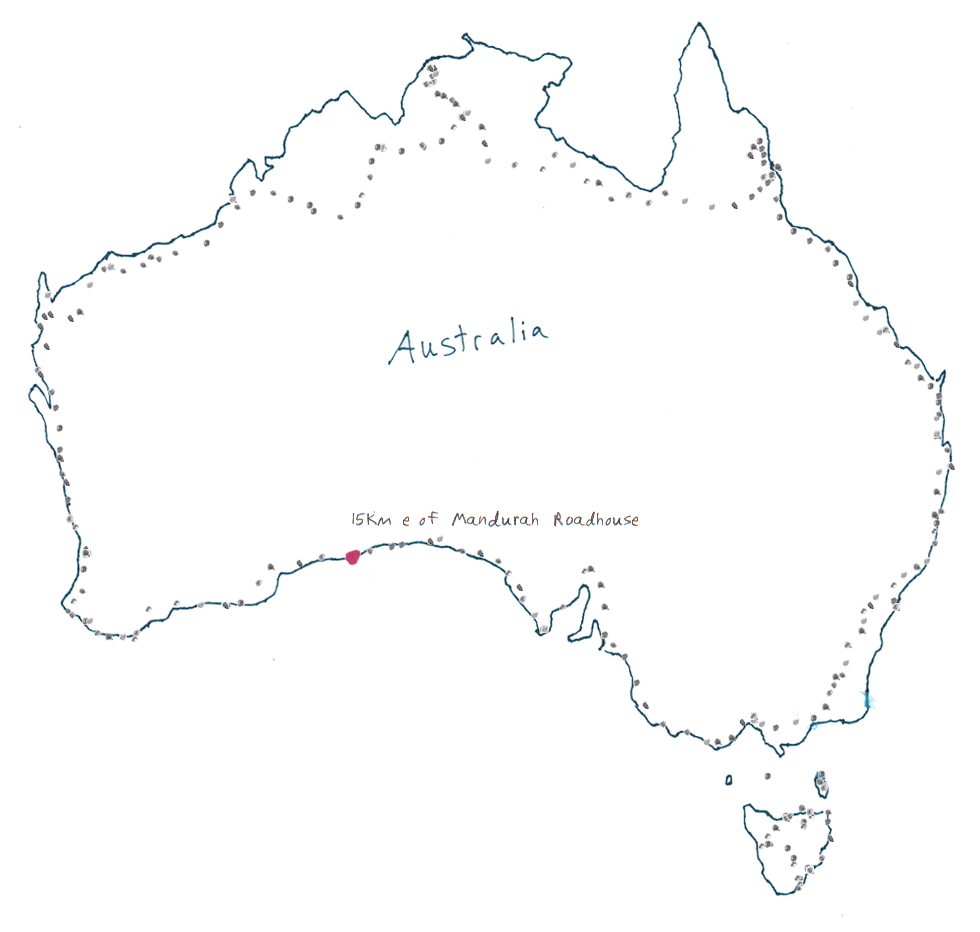 Woke up, packed up, and biked the .2 km to the roadhouse. Decided to pull a rock star move and get a huge omlette and coffee. The TV was on and they were talking about the Columbia Space Shuttle. I wasn't paying much attention at first...then I read the text at the bottom explaining what had happened. It was pretty sad to see, I still remember as a kid watching it take off for the first time. Last time this happened it was at the start of 3rd period Geography in the 7th grade, when Chris Jones walked in and said that the Challenger had blown up, and the geography teacher told him that wasn't something to joke about.

Anyway, soon my body was clean via shower. I filled up my water bottles in the shower, laundry room, and in the bathroom sink...the shower water was the worst I later found out, at least I didn't have to buy two cases of 500ml bottled water.

The wind was blowing pretty hard. A lot of the truckies, etc. asked me which direction I was headed, I just said "the wrong way." I didn't really like the thought of taking a day off there, nor did I think much of the thought about biking into a severe headwind, so I kind of just doddled around and talked to people. I called mum to see if she could check and see if the confluence nearby had been done already, it had. I lost my hat somewhere along the line and spent awhile looking for it. A bunch of combie buses and cars pulled up with Jerry's kids inside. (Note to US readers: these are the same vehicles/people you see with a zillion Grateful Dead stickers on the back. Down here they just have bumperstickers reading "Save Nigaloo Reef" (I have one on my laptop). Talked to them awhile. As I was talking to the girl I noticed my hat sitting on the dashboard of the VW bus. I thought about saying something, but decided to let the hat take a new adventure. I bought that hat in Marybough, NSW way back in April or something...$5.00 at Crazy Clarks. It never had much of a exciting life with me anyway, only pulled out once a week to over my disgusting hair while I was in town or something. Hope it has fun.

I soon headed out around noon. The riding actually wasn't that bad, the wind was blowing from the north. Ended up clipping along at a good 20km for awhile. Thought about my lost hat some more, but later figured I'd find a baseball cap on the side of the road. Sure enough, 39km out...I saw a nice New York Yankees baseball cap in the weeds. There is synchronicity for you.

Only really stopped once for any sort of break. The wind wasn't blowing so I kept pushing it hard, although a couple freak gusts came up and nearly knocked me over. Found another license plate, really nice condition this one was too.

Right before I reached Mandaurah, there was the most amazing sight. All of the sudden the flatness stopped and I was near the edge of a plateau. At first I thought it was the ocean in the distane, but later realized it was just flat land. All this time in Australia and I've probably only seen a view like that two or three times.

Got some food and water at Mandaurah. Decided to stop that dang clicking noise in my pedals once and for all. For the past few months they have been making this click click click noise, driving me loopy. Finally found the problem, more grease on the threads, it wasn't the pedal bearings after all.

Headed out with the intention of camping soon. Ended up just riding and riding, it was a warm night under the stars. Thought I found a spot so I went off into the push. Wasn't really sheltered from the road so I tromped around thought the bush back to the road. Ended up riding another 15km before finding a tree to camp under. This is important in that it helps heaps if the bike can be leaned up against something when packing/unpacking. Took awhile to get to the spot, got the bike stuck in some rabbit/snake(?) tunnel system. The bike just caved right in and I had to winge and moan to get it out.

It is late now, must get to sleep, should be on the South Australian border the night after tomorrow.