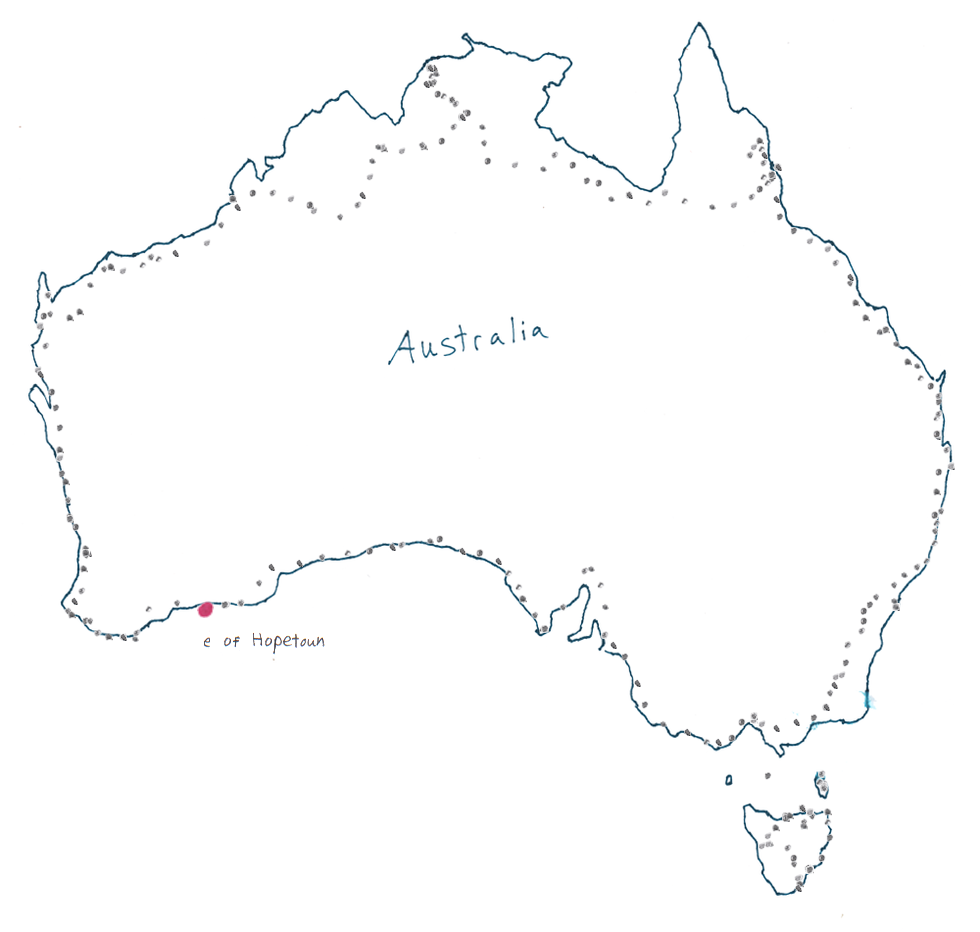 Got up and going early...wasn't exactly camped in the most legal of spots since this was a national park.

The road was all up and down, mostly up. Not much traffic though since this was a dirt road in the middle of nowhere. Just me cruising through some hilly scrubland, listing to Teengenerate...what a combo that was. Eventually the road made a sharp left right above the ocean. An oncoming car came along and stopped, so I did the same. It was this woman in her 40's. She talked to me awhile and all I could think about was the movie Summer of '42, yikes! I continued on and later went swimming in the ocean for awhile, had the whole beach to myself.

Got into Hopetoun and bought food. Right before I left town I decided to quick download my email to a disk so I could go though it in the tent tonight. I did that and with my remaining time I quick glanced though some of the email from the lunky.com address. Looked like the Update #5 has gotten a bit out of hand. I found this one email from a person on the list who I don't know personally, only though the website, who basically hijacked my whole email list and sent out some weird religious message along with a plug for his "life coaching" Needless to say I came unglued. I was so pissed I was shaking. Here is an email list that I mistakingly sent out with all the addresses on it, and he in turns has the gall to think that he can use this list to promote his "life coaching" business (or "how to make money part time on the internet!"). At the bottom of the email were his phone numbers, so....I called him up and basically lost it on him. "Well I just thought that since these people were enjoying your list that they might like to be able to do this themselves", he told me. I hate spammers and their mentality. Everyone I know gets emails thinking they might be interested in naked photos of two headed farmgirls too.

What a greedy fukker. Sorry for the bad language but I can't think of anything less to describe his actions. There are bike dealers on the list, but they don't spam the whole list promoting their biking business. Did he not care that I had family, friends, clients, and people I've met along the way on this list? Ok, no more on this, I'm still unglued on this issue.

A truck passed me with a Northern Territory plate barely hanging on, if only it would have fallen off I could have a long treasured "Outback Australia" plate.

ANYwAY, I was so bent out of shape the rest of the afternoon that I just rode and rode. Passed the rabbit proof fence along the way. This is basically a fence running the length of western Australia...to keep the rabbits out. (you can read more about it on the photos). I ended up riding until about 10pm. Couldn't really find a decent spot so I settled for one along a fence. I could hear the heavy breathing of cows out in the field but couldn't see them.

Ended up falling asleep, though I didn't sleep that well. (This entry I'm writing on 2/3/03, I was too bent out of shape to write up this days entry at the time)