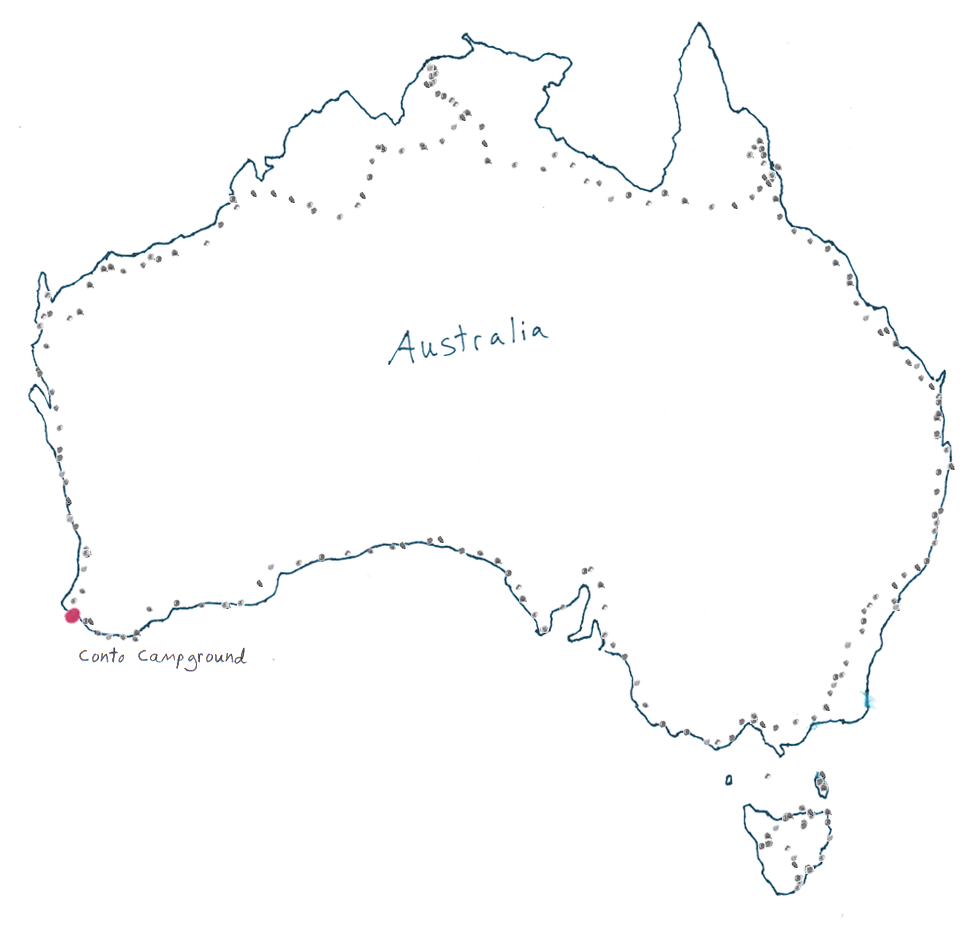 Two roads literally diverged in a wood and I took the wrong one. I thought about camping in a nice tall forest, but it was a bit brushy so I decided against it since it would take awhile to find a place to camp. So instead, I'm now at Conto's Field Campground in LLeeuwin-Naturaliste National Park. The big tall trees are gone, it is dry, and the people camped next to me are playing Michael Bolton's "I said I loved you but...I lied."

Today was pretty uneventful overall, ended up not going clear out to the coast road since the traffic was pretty heavy. Instead, I opted for a mishmash of gravel and paved backcountry roads. Saw a big snake on the road that was still alive. It kept twitching and stuff so I went way over to the side of the road and pedalled real fast so it couldn't lunge after me...like I was imagining it would. Blondie's "The Tide is High" is on now...ok it is the radio that the fellow campers are listening to.

Didn't have any jerkwad drivers yell or throw stuff at me today. Maybe that is just between Bunbury and Busselton. I got to Margaret River and got a vegetairian kebab for lunch. Margaret River is a tourist town with a lot of little shops and such. It is a lot like Leavenworth, Washington, USA...without the whole more-Bavarian-than-Bavaria-ever-was theme. Took a nap in the park and left town. Passed a big construction yard with the Rolling Stones' "Mother's Little Helper" blaring across the lot.

Along the coast road (well, it doesn't really follow the coast at all) there are a lot of caves. I stopped at one of them and they were closing, but the guy told me to camp here and go to Giants cave tommorrow...so I'm doing that. Have't done enough non-bike stuff lately so that sounds good. Dunno if I'll take the rest of the day off tomorrow in Augusta. Supposedly this is where the Indian and Southern oceans meet and you can see the color difference in the water.