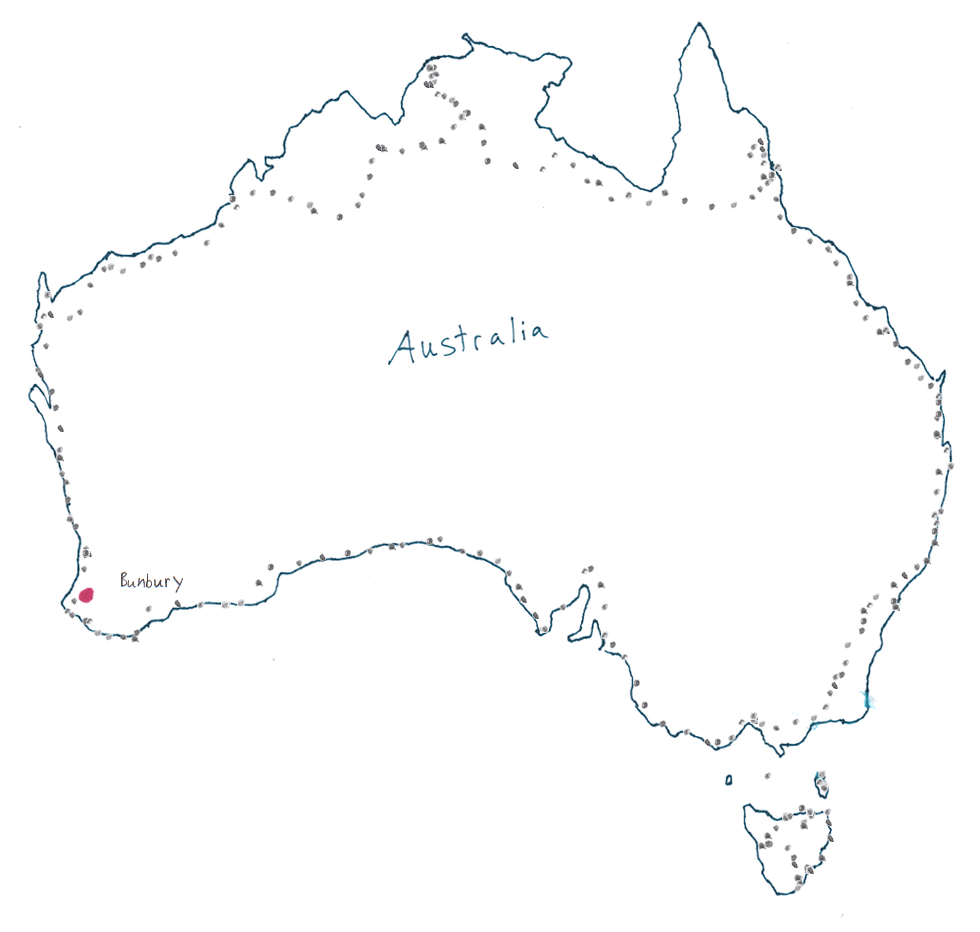 Was up and out of the caravan park around 6am. Took awhile to find my way out of town. Traffic traffic traffic. About an hour later a cyclist pulled up next to me and we talked. He told me about an alternate route down by the estuary, so we took that. Amazing how much yer mood can improve when you are not on some busy highway cutting though new housing developments. I stopped on a dock by the estuary and made breakfast. Talked to a few people there and left about an hour later. Stopped at a roadhouse and called the parents...Teresa was home too!

Passed a car up in a tree, with the words "Speed Kills" painted on the side. I continued on, thinking that today's entry would be pretty quick since nothing had really happened. About a minute later I feel something bounce off of me and hear a clacking noise. Some dickheads threw a Pepsi bottle at me. I hate this area. That was twice in two days, the third in all of Australia.

I enventually pulled off the road and took the quieter route into Bunbury. After reaching Australind and all of its mad traffic, I called up Brian. I met Brian through the travel site. He found it one day and offered a place to stay when I reached Bunbury. He gave me directions and after a couple turns at getting lost, I ended up on the main highway again. As I was biking down the highway, I saw something whiz right across my face. F*ck!, this is the third time in two days. I looked and it was a bunch of kids in mom's white minivan. Since these kids looked barely old enough to own pubic hair or a drivers license, I folled them into the shopping center parking lot. It looked like they were going to get out to go into the fast food joint, so I purposely acted lost and turned the wrong way...just to stall a little. I turned back and they were still in mommy's minivan. Their faces grew with excitment as I started heading right towards them. This is where it got funny. They backed out and took off though the parking lot. This was one of those hard to navigate fast food parking lots. So as they go forward, they slam the front wheel into the curb trying to get around a corner. Now daddy is going to be unhappy about a misaligned wheel. The priceless moment was that as they were starting to take off, I pulled out my camera and started taking pictures. One of the tykes looked back at me and his facial expression totally changed when he saw I had a camera. They sped off and I continued on. I hate this region already. Sure it might be a nice place, but considering that I've had two things thrown at me and one car door opened on me...I'm not coming here again.

I met up with Brian and follwed him to his place. We had a nice dinner and swapped stories. I had to turn in about 9pm since today's ride wore me out a bit. Tomorrow I'll head out of town...passing by the police station since one of the photos had the license plate in it.