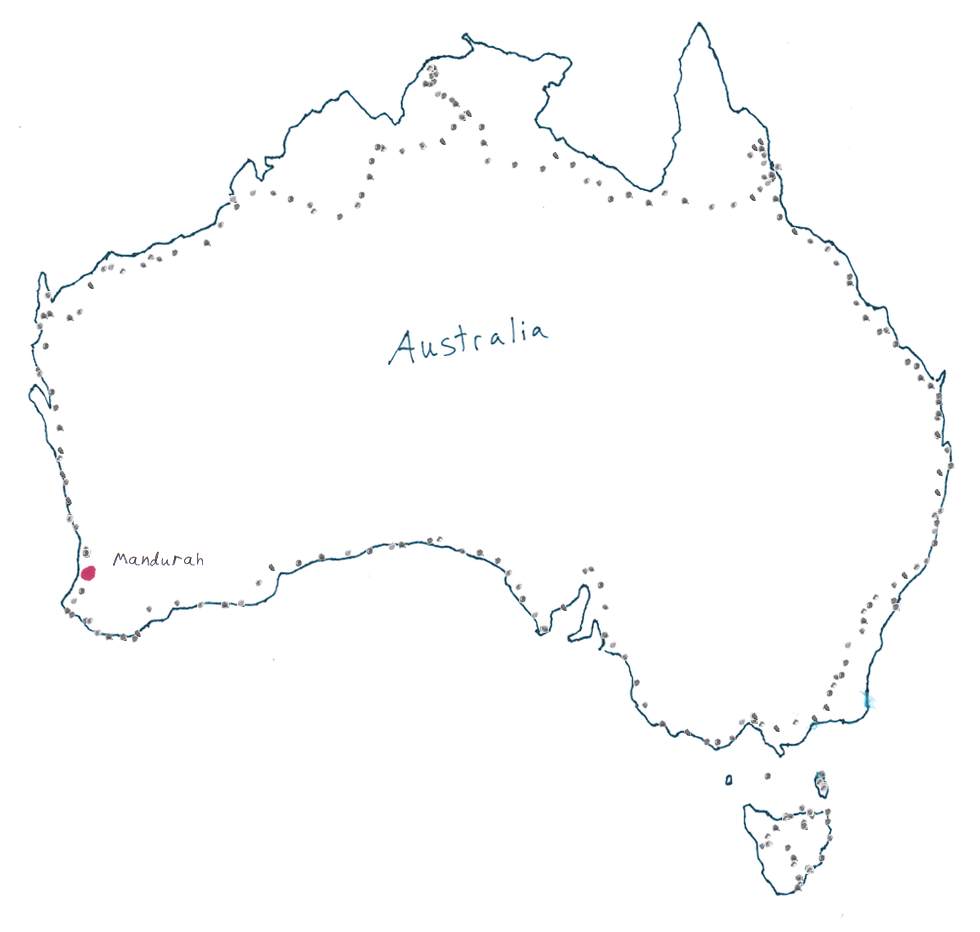 Today I broke free from the clutches of Perth! Looking for a deceased Bon Scott in Fremantle Cemetery kept me busy for a couple hours, but I broke free.

Had to do some last minute computer stuff like banking. Found out that the clock site is on one of those page-a-day desk calendars...had to order one for myself.

I left Sam and Nadia's around 8am. It was good to see them before I left. Aurora kept offering me a going away flower, then taking it back at the last second before I could grab it. Had I not met all these great people in Perth (Sam / Nadia / Aurora / Dave / Graham / Jessica / Sara / Paul / Jill / Chris / Matt / Pete / Nick / Annette / Brian / Denali / Zelda to name a few) I would have blown through town and be in South Australia by now. A good 4 weel break indeed.

I made my way though town on the nice bike paths listening to Daydream Nation. By the time I reached Fremantle 90 minuts later, everyone was all out and about heading towards the beach. Today was the day I got to do something I've been planning for since October....go see Bon Scott's grave. I was never into that newer AC/DC too much, mostly because they reminded me of high school for the longest time. Just now I'm recovering and don't cringe when I hear "You Shook Me all Night Long". Bon Scott was their previous singer and died in 1980. Simon said he had a friend who instead of saying "cross my heart and hope to die", she would say something to the effect of "I'd pour a bottle of bourbon on Bon Scott's grave". If that isn't totally correct, Simon can hack into this website and change the text to what it needs to be.

I found the cemetery, it was pretty large. I'd seen a picture of the grave on findagrave.com (really!). I spent a good hour looking around. Finally I found an older man with a watering can. I asked him where Bon Scott's grave was.

"Oh...well you are close, it is just right over there about 3/4 of the way down. Every year they all get together there on his anniversary", he said. I thanked him and continued towards the only part of the cemetery I hadn't looked in. I found the grave and took a few pictures. Someone had made out "AC/DC" on the kerb (I've been here for a year now, so I can now incorrectly spell "curb") with glitter. Someone left an American quarter on the grave, and one of the year 2000 editions with New Jersey (home to Betsy, CL, and Bruce) on the back. I left Aurora's flower there and then remembered I had a Nirvana "Nevermind" cassette that I found a few hundred KM north of here. So I left the tape there, oh well, whatever, nevermind, indeed. The best thing I could come up with to do in the spirit of rock and roll rebellion was to ride the wrong way out of the cemetery though the gate marked "Entrance". Black jacket and take up smoking and I'd be set. (well, practicing my F and B chords might help).

The rest of the day was spent riding on a busy 4 lane road..the whole dang day. Found a motorcycle license plate, my first. Found another license plate awhile later. Also found a very deadly (I think) King Brown Snake, it looked dead, but I wasn't sure and didn't have any intention of finding out. This wasn't random bushland. It was on the side of a busy road in a suburb. Man, if something as deadly as this was found in Beaverton, Oregon...the news helicopters would be out in full force and an army of snake psychologists ready for interviews.

I reached Mandurah in the late after noon. Got groceries and headed to the caravan park. Some dickheads went buy me with their car door open and closing it after they went buy me, everyone looking back at me. Had I flipped them off they would have came back at me wondering why they deserved that. I'm at the caravn park now. Missed out on free dinner, I was cooking when some people I'd talked to earlier came over and asked if I wanted to eat with them. I'll do dessert though...