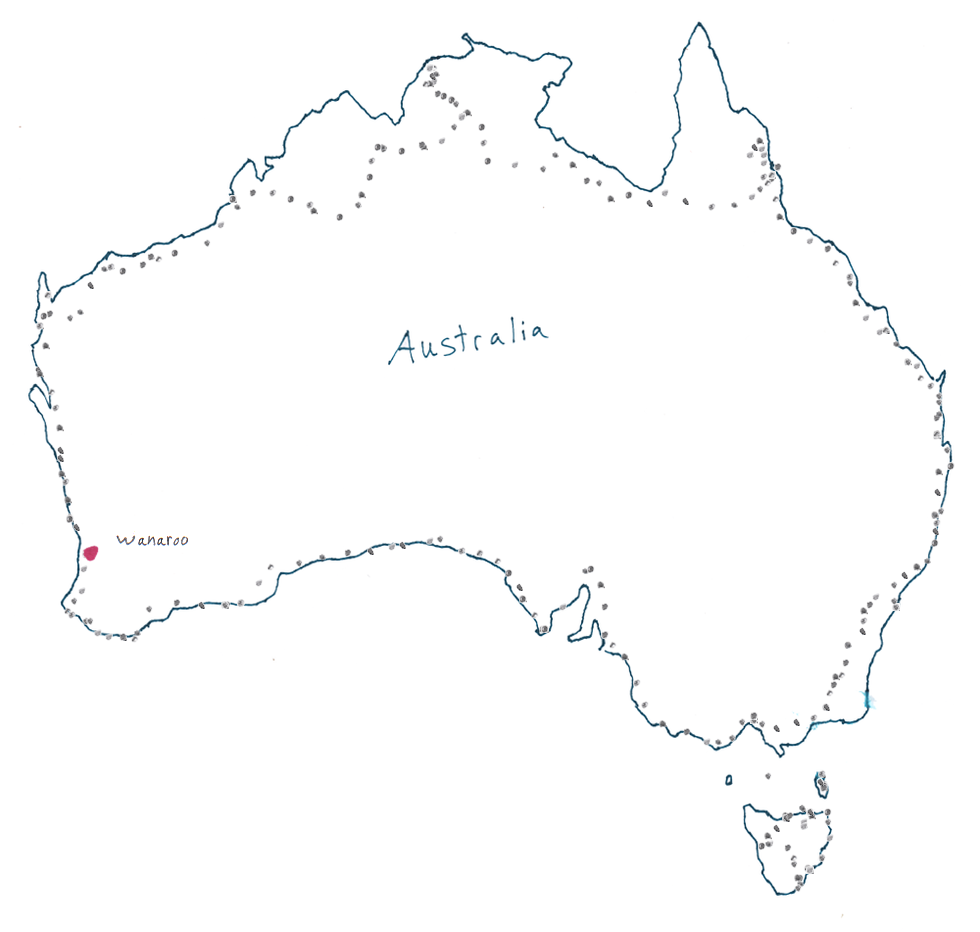 Woke up several times during the night with my rainfly banging around. I relaly need to take the extra 1.3 minutes of effort and stake down the rainfly. Was up early though and made my morning tea and a mishmah breakfast of about 3 different flavors of rice. A couple of wallabies bounded by and I got them (far wayay) on the camera, maybe one day I'll get a closeup.

Lancelin was only about 5km away and the road looked pretty good...so I should be there pretty quick. This turned out to be complete hogwash thinking though. Although it was only 5km to Lancelin, the road quickly degraded into one of the hardest parts of the trip.

The first km or two wasn't two bad, just a nice enjoyable ride on a packed sand road though the bush. The road made a turn and headed straight for some sand dunes. To make matters worse, the wind was blowing incredibly hard. The road soon lost its firmness and I was having to lift the bike up while I pushed it. Sand was blowing everywhere. The closer I got to the dunes the harder it was to see. By the time I reached the dunes it looked (and sounded) like I was in a driving snowstorm. I could barely see the tracks of the cars that passed me this morning I continued on the road until I reached a point near the beach. It didn't look like it was going to get better anytime soon, so I headed for the beach. The ridge on the beach blocked some of the blowing sand, yet there was still a very heavy haze over the beach. By this point I had sand stuck in my left I and I couldn't really use it. The sand on the beach wasn't that firm and sloped a good deal. It was a pretty rough haul but I didn't mind. It seems the tougher it is, the better the reward is when you are done. I saw some houses and pushed the bike up over the beach ridge to the street. Those poor homeowners. Here were these really expensive looking houses, yet they were getting showered in sand from the dunes a ways away.

Washed the bike and my left eyeball off at a park. The sand came off the bike but not out of my eye. Got it out with q-tips eventually and could see again. Had a crazy notion that I could make a phone call and spent the next 20 minutes trying to find a payphone. One thing I've noticed with payphones in Australia is that they are either:

a) vandalized and won't accept coins

b) are these gawd-awful "Gold Phones" which are pulse dial! C'mon guys, a pulse dial payphone is soooo 1981!

Made a few phone calls and rolled out of Lancelin around 11:00am. The day was pretty unevetful except for finding a girl's drivers license and bank card on the side of the road. Only really stopped for a break once during the entire day, and that was for lunch.

There was a bit of a headwind today. Nothing really unusal happened except for finding a girl's drivers license and bankcard. There were a lot of tree farms in this area and it made me a little homesick for the Pacific Northwest. Triple-J was playing old Run DMC...that was kinda nice too.

Got into Woorema around dark, the Perth suburbs start here. Found the carvan park and that was that. (I'm not going to mention the very large bar of chocolate I bought and have now almost finished). Tomorrow I'll be in Perth! Passed the 15,000km mark yesterday and didn't know it. This is pretty much the 3/4 way around mark and a didn't do anything to celebrate, bummer. Depending how long I spend in Perth, my Christmas present to myself might be 10,000 miles ridden.

A guy about my age came over with a bunch of chips (french fries) and gave them to me since they couldn't eat them all. We talked awhile and made plans to get a clock picture in the morning.

Anyway, like I said, tomorrow I'll be in Perth, will be nice to be there after seing it on the map for so dang long.