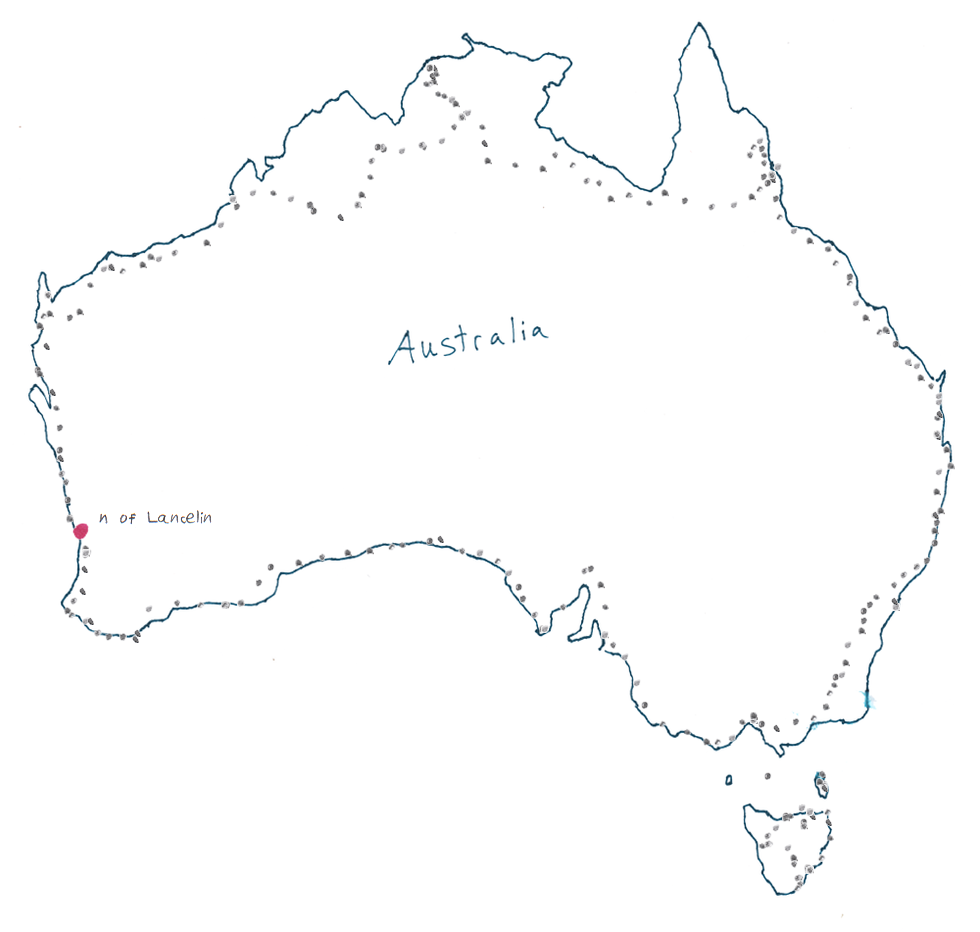 Woke up about the same time as everyone else. Noodled around awhile drinking coffee and eating gas-burner toasted toast. Got things packed up and said goodbye to everyone. This was a good/unique stopover, much better than hanging out in a hostel for awhile. I bid goodbye to everyone and headed out. What a nice and unexpected detour to my biking plans. Dave and I made plans to meet up when I got to Perth.

The road was a bit sandy and hard going at times. The brush was a bit high so I had to listen for oncoming vehicles. A lot of the vehicles had these really high flags on them. This way you could see them driving through the bush and know to slow down since there were so many blind corners.

After a few km of riding, three trucks past me. The last one stopped and a woman leaned out the window saying "would you like a ride?" She seemed a bit shocked when I said no. From then started to get a little snotty with me as if I didn't know what I was doing. She said there were a lot of blind corners and such. I told her I could hear the vehicles coming from a long way off since I wasn't driving. I told her I'd be on the beach in a few minutes anyway so it wouldn't matter. Her response was, "no you won't!" Indeed she would be correct if I were driving a car, but I was on a bike and could get down to the beach long before the cars could. I've heard zillions of stories of bikers down here who get themselves in a bind and need to be rescued, so many motorists assume you are one of them. She just seemed insulted that I had the nerve to turn her helping-hand offer down. Sure I was pushing my bike though the sand, but I was having a pleasant time. I wrote her off as Chuck D would say "There's a five letter word to describe her character".

As expected, a few minutes later I was biking on the beach. The last bit to the beach was a bit of a struggle though deep sand. The beach was really pretty though. Eventually I got to the other shack settlement named Wedge. Met a couple there on the beach. They pretty much gave me the same advice that the guy at the gas station did.

I continued along the beach, sometimes riding, sometimes walking. Had to quick sneak around a couple rock outcrops while the waves went out. Made lunch and continued on. There was a family there on some sort of 4wd beach tour. The tour guide was getting a photo of all of them posing with the safari 4wd vehicle, all holding their thumbs up. Now I know where all of those brochure photos come from.

Down the beach at 5km/hr I went. One oncoming vehicle passed me then came back. The guy talked to me awhile and liked the idea of what I was doing. He offered me pot, beer, and lemonade....I took the latter. He said he'd offer me a ride but figured that would be a little bit of an insult since I had ridden all this way so far. Why is it that the drunk and offbeat characters I meet on this trip are the ones who say "hey, good for you!", while all the tourists saying "are you ok?, are you SURE you are ok?". I said goodbye and continued on. I reached the first bog, and it was boggy indeed. The sand was about a foot deep. I had to pick up the bike somewhat and push it along. I stopped for a second and another 4wd passed me and stopped. The guy asked if I was alright an dhis wife must have asked me about five times if I was alright. Let's ignore the fact that I'm only about 10 miles from the nearest town.

The sand got really boggy not long after...it was really tough pushing the bike through the deep, wet sand. At the next turnout I took it and was up onto a nicely dirt road. The ride was pretty swift (10km /hr!) for the rest of the afternoon. I saw one area that might be good to camp, so I ditched the bike and found one spot to camp and went down to check it out. When I rounded the corner, there were two very large kangaroos standing there. Of course I didn't have my camera so I stood there and watched them bound off over the hill. I stammered around a bit and decided to just ride closer to Lancelin. Eventually I found a nice little spot off the road in the bush and made camp about 5km north of Lancelin. The road is good so it should be a quick ride out. Maybe tomorrow I'll be in Perth or really close to it.