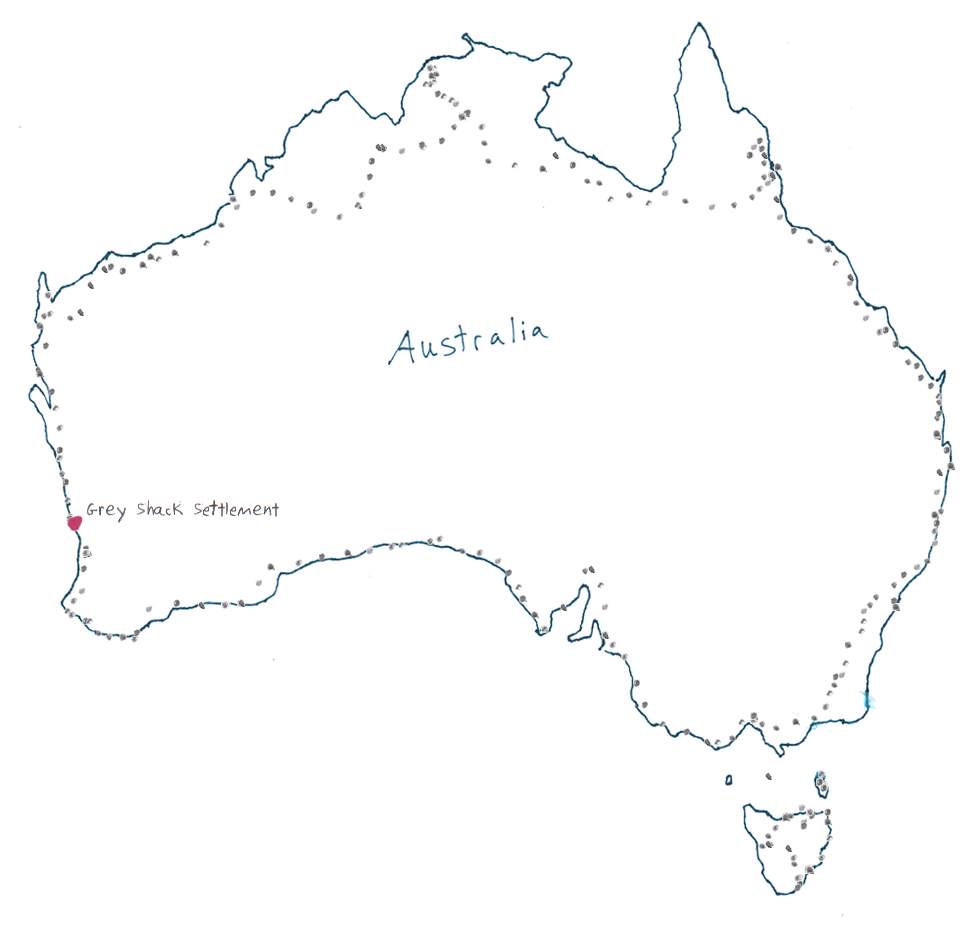 Six years ago today I finished the PCT, time flies. Ate breakfast and rolled out of camp. It was kind of nice to be riding down the sandy 4x4 road, such a change from the past few months. No cars, no people.

I was expecting today to be a bit different since I was taking a 4wd track near the beach, but I never imagined the things that ended up happening. Never in my life would I expect five naked girls...ok kidding, just making sure you are paying attention.

I started down the dirt road and was liking it already. Just a rocky/sandy road winding its way though the scrub with the ocean off in the distance. I was going roughly the same speed as yesterday (10km/hr), but the slowness was due to the rough road and not the wind. I saw the turnoff to the shack settlement named Grey. All along the coast here are these little squatters shacks set up along the coast. They have a unique character to them, something far surpassing some big stoopid resort. I parked the bike and walked down there and it looked like I could go up the beach a bit. I went and got the bike and slugged it though the deep sand until I got to the beach. After a bit of riding there was a small rock outcrop. I parked the bike and decided it was lunchtime. With my avocado in hand I walked around the rocks to check out the other side. This guy came down off the side of the hill heading towards his surf ski. We started talking, his name was Dave. Turns out he is an urban planner by day and started asking me about Portland since he had studied it a bunch. He said that the rocks continued on down the beach, so I'd have to take the road for a few more clicks before I could ride on the beach for awhile. He invited me up for a beer so I went back and grabbed my bike.

At a couple spots on this stretch of coast there are these shack settlements. They are basically little cabins/fishermans shacks that were built on governement land of some sort. Dave was staying with friends who had one of these shacks, right up on a little cliff overlooking the ocean.

At the shack I met Anthony and Sara who had the shack. We talked and talked and they said I could stay overnight. Dave and Anthony were going out to check their crayfish (lobster) pots so I went out with them. The crayfish hide in all the nooks and crannies so you gotta hold your breath real big and then dive down under and go try and catch them. I dove down to check them out, but didn't have gloves so I didn't try to catch any. The craypots were empty. I don't get excited over tuna heads myself, but apparently the crayfish do. Maybe that is why I'm a human and not a crayfish.

In addition to this nice change in plans, the Total Eclipse was happening today. You needed to be in Ceduna, South Australia to see it in totality, but we could at least see part of it. The sky got a little darker around 4pm, much as if it was 6pm. We did the hole in the cardboard thing and was able to see the eclipse that way.

We spent the rest of the night drinking beer, watching the sun set, and swapping stories. Probably the best 10km day of biking I've ever had. heh.