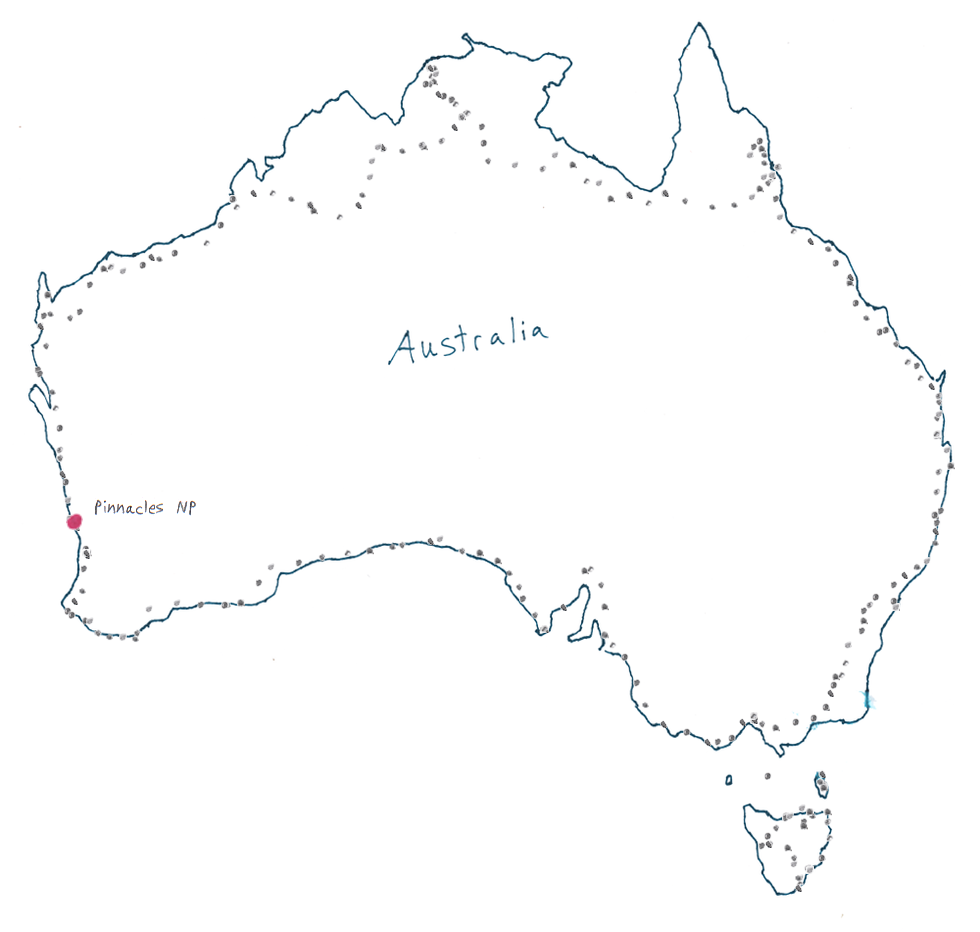 Had a pretty uneventful ride heading south. Found a Nirvana tape along the way. Listned to the "Ag hour" on ABC radio, seems to be a lot of trouble with sugar growers in Queensland these days.

Got to the town of Jurien and ate lunch and mailed stuff. Looked at a map and I think I'm going to try and take the 4wd road between Cervantes and Lancelin. It is about 110km shorter and I'll be going slow anyway...so the headwind really won't be that big of a factor. Besides, I've had a lot more memorable experiences on roads like this than the boring old highway.

I found somebody's sunglasses in my checkout basket so I gave them to the cashier. The funny part is that 10 minutes after I left, I realized I forgot my own sunglasses at the store. Had to go back and pick those up.

It took me over two hours to ride the 24km to Cervantes. It was straight into the wind the whole way. All the streets in Cervantes are named after characters in Don Quxiote. I just went to the gas station there to get gas for my stove. I asked the older guy at the gas station about the 4wd track to Lancelin. For the first time in ages I finally got decent, logical travel advice. I wanted to hug the guy. He said: "yeah, the first 11km is paved, then it goes to a rocky road, then it goes to sand along the beach, then about 10km before Lancelin you need to cut back inland and take one of the roads in, otherwise the beach sand is way to boggy. You are probably better taking the 4wd track since that will cut off having to go out to the highway and back to the coast." The clincher was his: "so even if you have to walk part of it, it will probably take the same amount of time to get to Lancelin...so you might as well just take the 4wd track". The reason I detailed this whole converation out is because this is mostly what I had concluded, and he was the first non-cycling person to tell me to go for it, that it might be fun, rather than just the usual "ohh no, it is sand, you might have to walk, there is no place to camp! horror! dismay! you are not in a car! etc. etc." Tearfully I left Cervantes and headed towards the Pinnacles. The Pinnacles are these large limestone mounds about 6-9 feet high. I don't know exactly how they are formed, but if you go to the parking area at the National Park they have a nice little board explaining how they are formed. I spent a good couple hours there riding around taking pictures. There was this crazy guy taking all kinds of pictures. He was really running around like a madman when the sun was setting. As I rode off after sunset, I looked back and he was taking pictures of me. I thought of pulling down my shorts and mooning him, but I just let him get his picture. I ended up finding this picnic area at a place called Hangover bay. It was really windy so I made camp next to a brick BBQ grill and called it a night. Had to do a tire change, those crap tires I bought in Broome, crapped out.

ok, I'm not going to get this far behind again and forget which ones I've written out already but not placed into the website, here is the original entry:

Actually woke up early and hauled butt out of town, didn't even make coffee. Got to Greenhead awhile later. Made breakfast there and continued on to the town of Jurien. Somewhere along the line I decided I should try and take the 4x4 road to Launcelin, rather than going all the way out and back around. The 4x4

road is about 63k long, and to go out and around is about 200k or or so. Mailed some stuff off in Jurien. Found someone's sunglasses in the store and gave them to the checker. The funny part of the story is that 30 minutes later I couldn't find my own sunglasses. I rode back to the store and my sunglasses were sitting near the cashier along with the pair I had found. I ate lunch and the usual gale-force wind came up. It took me 2.5 hours to do the 24k ride to Cervantes. I read that all the streets in Cervnantes are named after characters in the book Don Quixote, but I haven't read the book. At the service station in Cervantes I asked the guy about the 4x4 road. I was astounded at his response, it was totally logical and not what I expected. I expected him to say "You want to bike down that there!, there is nothing out there!" Instead the guy said that it was probably a better idea to take the 4x4 road since it would be a lot shorter.

I continued through the blaring headwind to the Pinacles. The Pinacles were pretty amazing, thousands of these limestone mounds anywhere from 1-4 meters high. Around sunset I came across a couple and the guy was frantically running around taking pictures of everything in sight. As I rode away, I looked back and he was taking video footage of me riding away. I thought about pulling my shorts down and flashing my bum at him...but maybe that would have made his video more unique...so I didn't. Ended up camping at a picnic area near Hangover Bay. Had I nice dinner of noodles with generic aspargus (spears even, not chunks!) and changed my bike tires over.