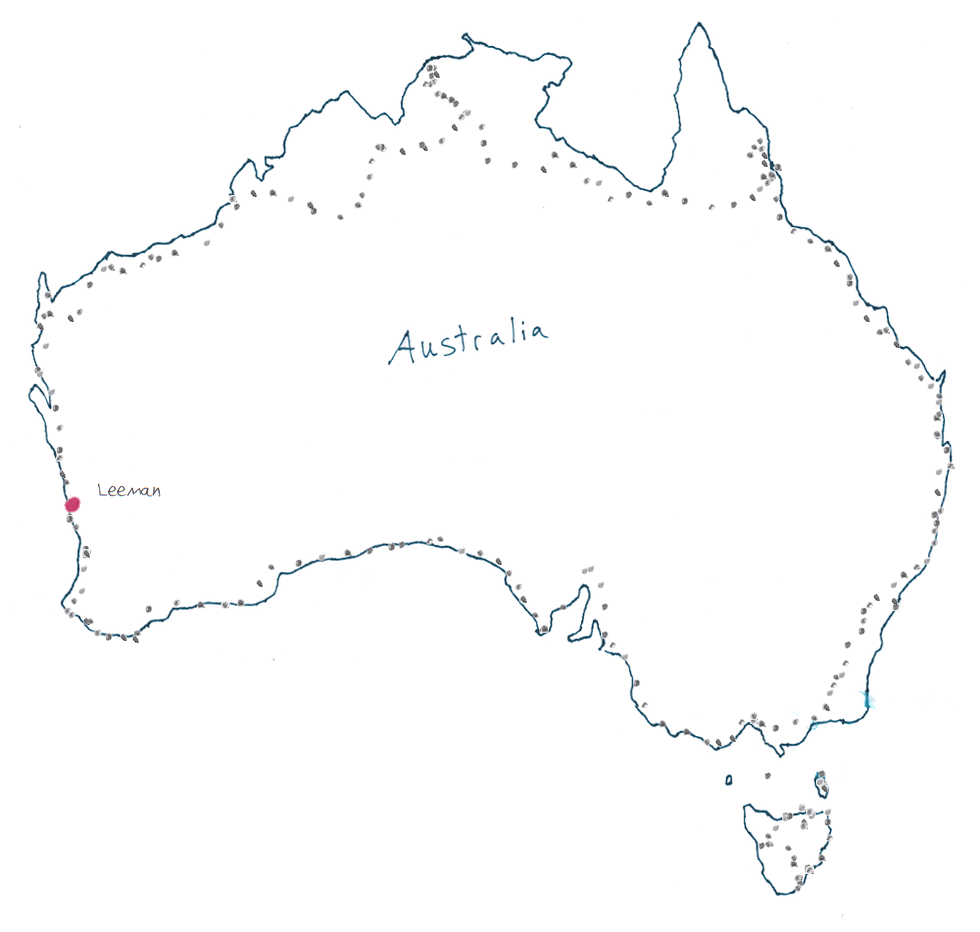 Today was a little better. Still really windy, but at least I got in a full day's ride. Left pretty early, but stopped at the gas station for breakfast...so I didn't really get on the road till 7:30am or so. By then the wind had started...ugh.

Not a whole lot went on most of the day except for one thing. I stopped in a little sheltered area and cooked lunch. As I was packing up a car went past me, stopped, and turned around. I thought they were coming to see if I needed anything. There were two guys in the front, but out of the back popped Maire that I met in Exmouth! She even had a candy bar for me too! She was going to go see the Red Hot Chili Peppers in Perth...but it didn't look like I was going to make it there in time. We bid goodbye and both continued on. Maire and the two guys travelling at a rate about 10x faster than me.

I hauled butt to Leeman trying to get to the post office before they closed...missed it by 2 minutes. Drowned my sorrows in orange juice and cookies instead. Found the caravan park and set up camp. Talked with a couple from Holland. I really wish I knew where Peter was from so I didn't have to keep having this conversation exchange with everyone Dutch person I meet:

me: "yeah, I have a friend from there"

Dutch person: "really, where about?"

and of course...my original entry that I misplaced on my hard drive and now found and placed for historical significance:

Did my usual routine of waking up around 5:30am and promptly falling back asleep. Right after I closed my eyes I realized that the wind was not blowing, so I shot up out of bed and packed up the bike. Stopped at the gas station for some quick food and headed out of town. It was so nice to be riding again with no wind, downright pleasant. I had about 60km in by noon. At that point a giant blast of wind hit me in the face and my speed was cut in half. I slowly plodded along at about 9km/hr. I wanted to get to the post office in the next town to mail off the lunky update...but now it wasn't going to happen. Also realized it was going to take another two hours to go the 20km into the next town, so I found a sheltered spot and cooked lunch there. As I was packing up the bike a car went by me, then turned around. (all while I was stuffing my face with dry Milo....out of cookies and I wanted sugar). I thought they were going to see if I needed any help...but instead it was two guys and they had Maire from Exmouth (see a few days ago) in the backseat! We talked awhile and she gave me a candy bar...which I promptly ate. Probably see that whole mob again in Perth. Don't think I'll be there in time to see the Red Hot Chili Peppers.

I got back on the bike and continued on, slowly. The wind kept blowing me off the road. I got to town just in time for the post office to close, almost to the minute. Bought some food and went to the caravan park. Now it is time for bed, gotta beat the wind tomorrow.