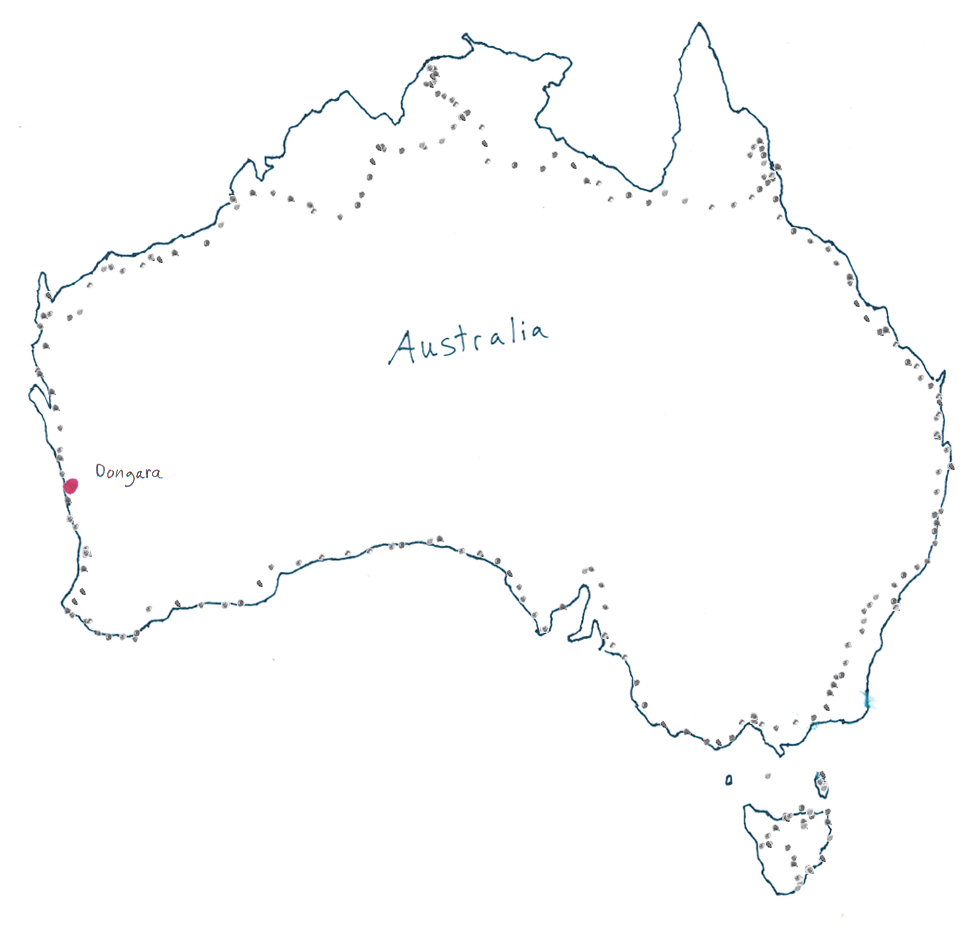 Had a heck of a time today...wind wind wind. The ride was pretty uneventful overall. Left the "S" bend caravan park, man the guy that ran it sure was nice. It was very slow going and it took forever to get anywhere. I pulled into Dongara. Being tha it was 2pm on a Sunday, everything was closed except for the bar. I was hungry so I pulled a rock star move and went to a nice little cafe for lunch. Had a homeade veggie burger and a cookie. Read the Sunday paper until she closed up shop around 4pm. By then it looked like the wind wasn't going to get any better, so I decided to call it a day here. The caravan park was pretty windy so I opted for the hostel. The guy let me camp outside in the big tent. I told him being out there in the big tent was better than having to unload the whole bike. Spent the rest of the night listening to Triple-J radio waiting for..bum de dum, a Bob Mould interview to come on. Listened to the interview, the rest will be on next week...a shame I'm going to miss the show.

Ok, the above was written about a month after the fact, I finally found my original entry on my hard disk...here it is:

Woke up about 2:00am and the wind was slapping the rainfly of my tent around.

Woke up about 2:45am and the wind was slapping the rainfly of my tent around.

Woke up about 3:12am and the wind was slapping the rainfly of my tent around.

Woke up about 3:31am and the wind was slapping the rainfly of my tent around.

Woke up about 3:33am and the wind was slapping the rainfly of my tent around.

Woke up about 4:12am and the wind was slapping the rainfly of my tent around.

Woke up about 5:15am and the wind was slapping the rainfly of my tent around.

Ended up yanking the poorly secured rainfly off the tent and stuffing it underneath. It can rain all it wants....I just want some sleep I figured. Woke up for good at about 6:00am and it was windy windy windy. I kinda screwed around all morning hoping it would stop, but it just got worse. I took off about 10:00am. Found a girly magazine on the side of the road. Usually when you see a magazine on the side of the road it is either a girly mag, house decorating mag, or a TV guide. I stopped at about 20km and thumbed through the girly magazine. It was kinda boring. Whoever invented the video capture must be rolling in the dough, because all these magazines with the "hot celebrity nude photos" are lame. All the "pictures" consist of are video grabs from some obscure movies that some actress made when she was 18.000001 years old and trying to get into the movie business. Anyway, this was about the most exciting thing to happen today. Wind was blowing hard so after a whopping 40km I called it good which I reached Dongora. It was a Sunday which meant the entire town except for the pubs were closed. I did find a small cafe that was open. It had actualy real food, like homeade veggie burgers. After a couple hours there I headed to the hostel. They guy there was cool and he let me sleep in the tent outside...since I was too lazy to unload the bike and load it all back up 10 hours later. Bob Mould was interviewed on Triple J radio and they played part of the interview that night. I would have missed the interview (out of radio range) had the wind not been blowing...so maybe it was a good thing. Oh yeah, today is the first day of Summer.