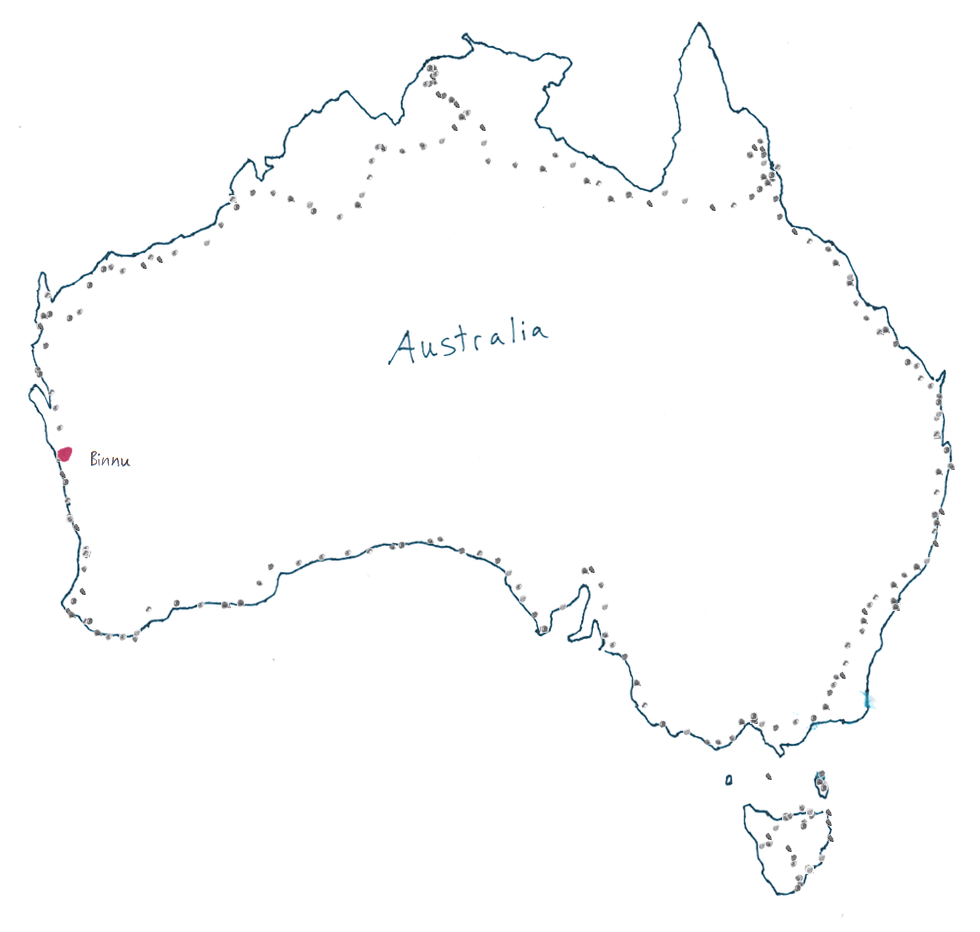 Woke up at 4am and the stars were out. I heard something jiggling my pot lifter which was lying on the ground. I was sleeping ontop of the picnic table, so I simply turned over to see what it was. There was a small dingo staring at me. I made a pathetic hissing noise and it hopped back in typical dingo fashion. About a minute later it came back and I heard the pot lifter jingle again. I should have taken a picture, but instead lunged at it. It turned and scurried away towards a caravan...maybe he'd have better luck there. Went back to sleep and got up a couple hours later. Ate breakfast and loaded up some new tunes on the MP3 player. It's about time I actually listened to that Otis Redding album I bought nearly 10 years ago and haven't listened to.

Morning ride was pretty uneventful. Stopped at these giant water tanks for a snack. An older couple came by and as they were leaving, the guy asked if he could take my picture. I said sure...and he took my address to mail me a copy. Turns out he deals with a lot of the water issues around here. He said once he was at these water tanks and this "pommy bastard" was soaking his feet in a large bucket of water because his "feet were hot". Needless to say it wasn't a pretty scene that resulted.

The next few hours were pretty uneventful, but it was a very fast ride since there was no wind. Was kinda nice actually, listening to the Grateful Dead as I chugged along....thinking about all of those GD shows I went to in Eugene, Oregon. Before too long, everything changed. The bushland just stopped and farms began. I probably won't be back in the bushland until I get north of Esperance near the Nullabor in about a month's time. It was a little sad how the bushland that I had been enjoying for the last three months just suddenly stopped. Oh well, at least it is a change.

About 20k for the Binnu gas station, a giant gust of wind hit me. This wind did not stop. My speed was cut by about 2/3. About 5k from the gas station, where junk food and rest awaited...my rear tire went flat. (yup, same one I fixed yesterday). I parked the bike and tore everything off the rear of the bike. I was hoping nobody would pull up and asked if I needed anything, since I wasn't in the most conversational of moods. A car heading north passed me, then made a u-turn and parked. I was getting ready to say I didn't need any help when I discovered it was Andy who I met in Exmouth. (and is holding up the clock on the Tropic of Capricorn a few days earlier). We talked while I fixed the tire. We talked awhile and I continued on at a snail-like pace.

I reached Binnu about 5pm. Binnu consists of a gas station, salt factory, and a sporting ground. I bought a few things at the store. I asked the woman if there was anything newsworthy going on and she said she didn't read the big newspaper..."too much doom and gloom."

I'm currently "camped" under the recreation building's outdoor awning with the tennis courts next to me. Gotta get up early so I don't hit the dang afternoon wind 20k out of Geraldton.