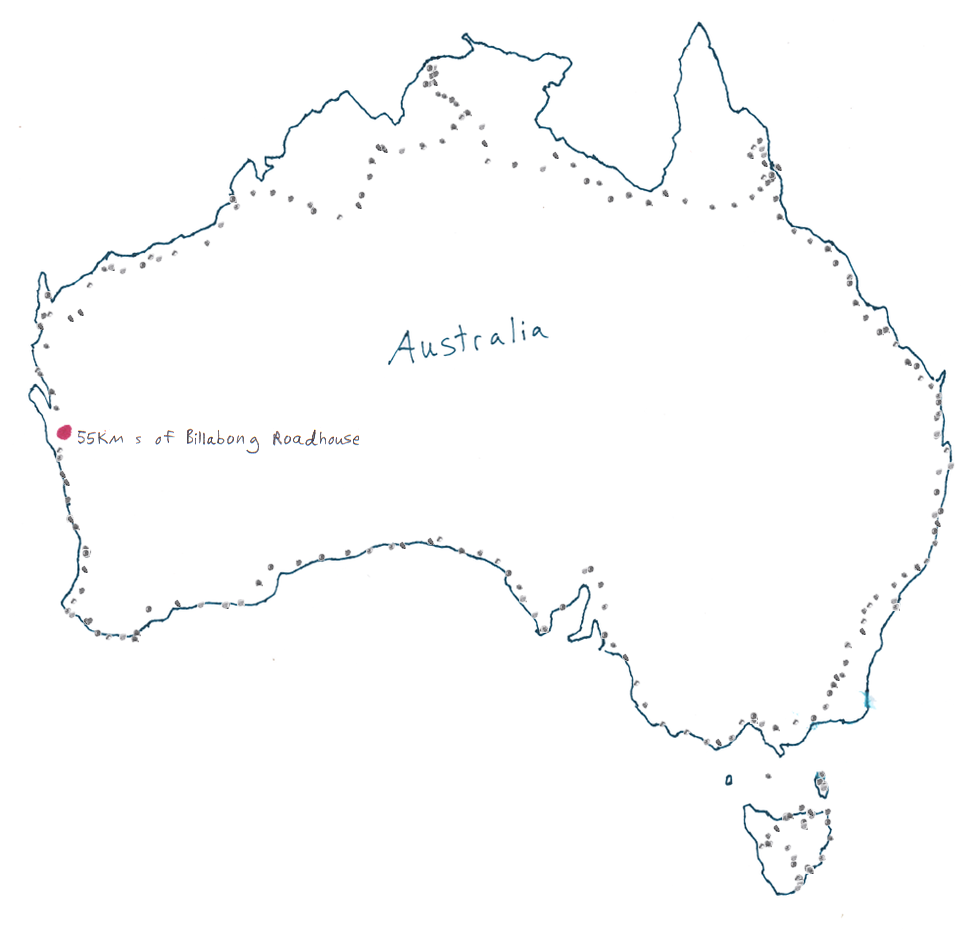 Woke up to the sound of the fence wire making a "pinging" noise. Turns out it was a couple of goats that had crawled though. This area seems to have a lot of wild goats around. Made breakfast/coffee while listening to the "Tourist Information Channel 88fm" that was broadcasting from the Overlander Roadhouse about 1km away. Seems like there is a lot going up in the Shark Bay area, but I don't really have the time to be going to every single cool spot...otherwise this trip would take two years. One of the ads on the radio was for a boat tour company that would give you $100.00 if you got seasick, since their boat was SO stable.

I got rolling along and about 10km down the line my rear tire went flat. Turns out the patch gave out. Time for a whole new set up tubes in Geraldton or Perth. While I was fixing the tire, a guy stopped on the other side of the road. He gave me a bottle of water without me even asking, though I did decline his boiled egg offer.

The soil arond here is really red, just like up around Port Hedland. In the spring the wildflowers around here are supposed to be amazing...but the obviously wasn't the right time since everything was dead and dry. The road went about its roller coaster motion over the sand dunes. I found about four license plates in the first 30k of the ride. Front tire started going flat about 10km from the Billabong Roadhouse, so I pumped it up a couple times along the way.

Got to the Billabong Roadhouse in the early afternoon. Fixed the tire, then celebrated with a Coke and potato wedges for lunch. A bunch of Army vehicles pulled up. One of the guys asked where I got the water. I told him I just gave the roadhouse people a couple dollars for a fill-up. He didn't like that idea so he went into the bathroom. When he came out he asked me if they said anything about the water in the bathroom. I laughed and asked if he bothered to even taste it, since it was about 50% salt. He made a disgusting face and poured it out. I decided to get going so I took a couple pictures/movies as I usually do before leaving a roadhouse. All of the sudden this guy from the 103rd Asshole Division walks by me with his hand in front of my camera. "No pictures of us or the vehicles". I thought about pointing out that he wasn't Madonna and that they were all probably caught nicely on the security cameras...but instead just said "oh" and kept my mouth shut. He continued to stare at me until I left. Glad I wasn't middle-eastern looking or all hell would have broken loose. Whatever.

The rest of the day was pretty uneventful, though a big headwind picked up for the last part of the ride. Stopped at a rest area and there was a large blue bus parked there. I talked to the couple of couples for a few minutes (more than a couple), they gave me a couple beers also. They had met Grubby up north awhile back. "Yeah...dark rimmed glasses and really long dreadlocks".

Getting up early tomorrow I reckon'. Tommorows entry will prove me right or wrong.