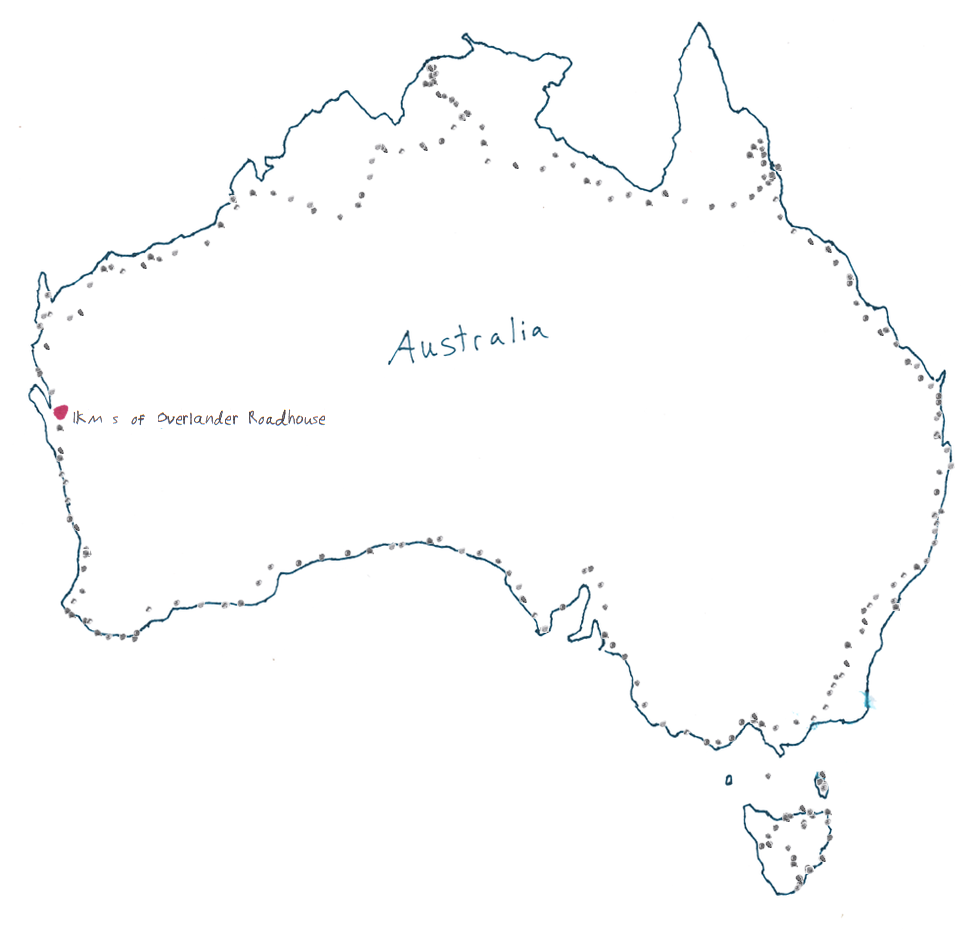 Woke up to the sound of a bunch of red golala birds (sp?) all chirping away. They were picking around the ground, sometimes burying their little red heads into the dirt. They of course all shrieked and flew off when they saw me pop out of the tent. Did the coffee ritural and then loaded up the bike. Carrying the bike out to the road followed by three trips of crap hauling sucks...but tyres with 15 thorns in them sucks even more.

Found Simon in the caravan park. He met a guy there last night who fed him goat meat...apparently it is pretty good from what Simon says. Spent awhile at the roadhouse eating a veggie burger for breakfast followed by 1/2 ton of other food. Simon was taking today off. We were both writing email when these two cute Austrian girls sat by us. "Can I ask you a question...why the HECK do you bike all the way out here?!", they asked. After they left Simon pointed out that his riding overalls look basically like dirty pajamas...not the best clothes for flirting with girls.

I rode on out of the roadhouse, probably see Simon in Geraldton. A car passed me with a big "oversize vehicle ahead" sign on top. I got off the road and a semi-truck drove by with a large crane on the back. About ten minutes later the pilot car and crane were pulled off the road. They waved as I rode past so I turned on in. Talked with the two guys for awhile, they gave me cold water and a couple chicken sandwiches. One of the guys asked where I was from and said that he had been to Washington State in the US.

"and Pasco", I said. He laughed and said that was where the crane was from, from the Tri-Cities. It was really weird to be all the way out here and have him mention in detail about places a couple hours away from my home.

I passed a couple 20-something tour bus vans (20-something as in their passenger age) were parked. I talked to the one of the guys, thought about hitting them up for a clock photo but didn't...was kicking myself later because it would have made for a good photo.

Spent most of the day just riding along looking for license plates, found about four today, including one from Tasmania!

Later down the line a couple guys passed me and turned around. They gave me a cold beer and we talked for awhile...I got a clock pic this time.

Pushed it on into the Overlander Roadhouse. It was sure a lot faster ride today, nearly about twice as fast. My plan to just get water and go failed miserably. I ended up with a veggie burger/fries and an ice cream bar. Oh well, at least I don't have to eat noodles with tunafish tonight!