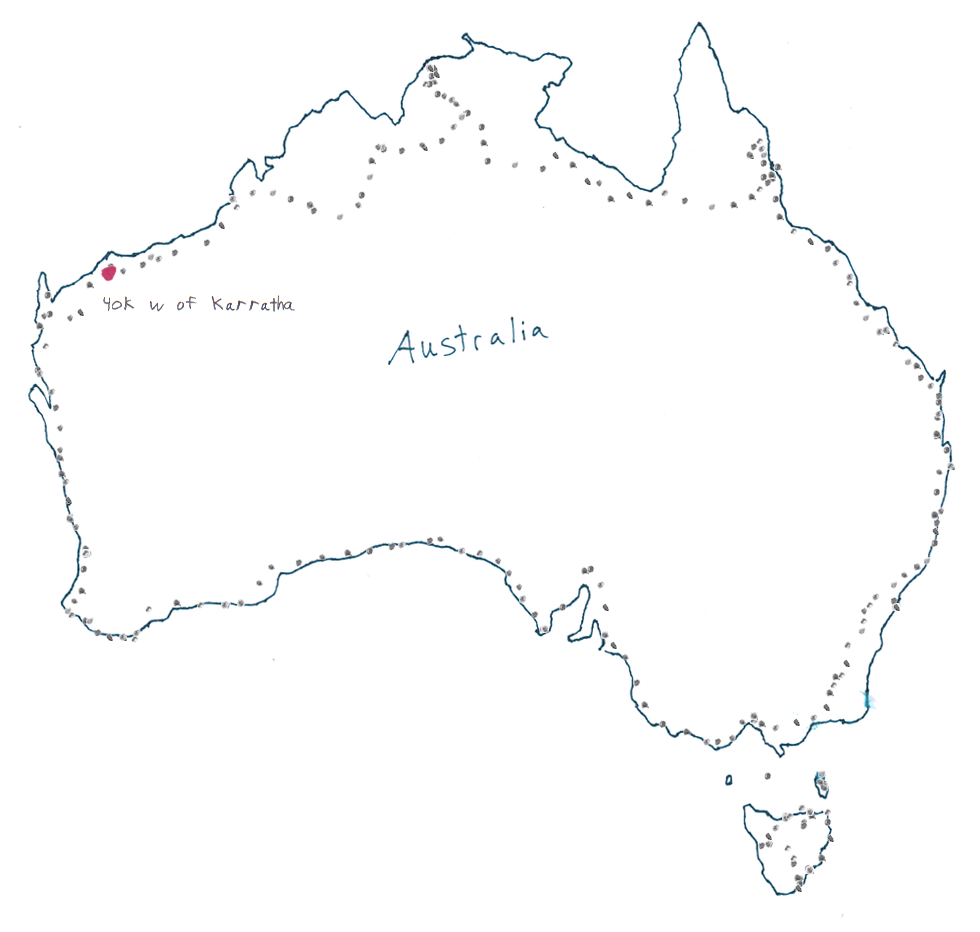 Got my new wheel today! No more feeling like I'm riding a potato chip. Even more exciting is the fact that I got to leave Karratha!

Hung out around the hostel and talked with a few people. Simon was going to stay around a day or two extra. I headed out in the late afternoon...straight into a headwind. It was really slow going, about 12km/hr. I had the radio on since out here it is a special thing. As soon as you get a slight distance from town it drops off. Anyway, I was listening to Triple-J and they were talking about the band Blue Bottle Kiss. The two DJ's were talking about how at 10:00pm they were going to have a thing on the band and one of the guys from the band would be in playing five songs that influenced his life. The other DJ asked if "we could maybe get a sneak peak as to what albums/songs some of those might be". The other DJ said, "Well...one is a Husker Du record which I think is great because there needs to be more Husker Du on the radio."

I got to the roadhouse about 12k out of town. I decided to hang out there awhile and see if the wind would die down...plus it would be a good excuse to wait around and hear the thing on Triple J and maybe even hear a Husker Du song on the radio for the second time in my life.

So I sat in the roadhouse typing email, occaisionally looking out the window to watch the signs swaying back and forth on the gas pumps...too windy still. The Simpsons came on and it was just a trucker and I in there. We didn't really talk much, but had a good time laughing ourselves silly. This guy was sort of the big tough trucker sterotype, yet he would be keeled over laughing like a little kid at the TV.

I headed out and about 9:45pm stopped when the radio started to fade. I laid there in the bush listening to the radio. Eventually the program came on. Turns out the Husker Du song was their cover of Eight Miles High. I cranked it up and looked at the stars as Bob tore into that overdriven Flying-V guitar. A shooting star bounced across the sky...nice touch.

The DJ said, "and that was Bob Mould with the mighty lungs, we'll be doing a show on Husker Du next month when Bob comes to town.."

I rode into the night for another couple of hours and made camp. I'll just get up earlier tomorrow...