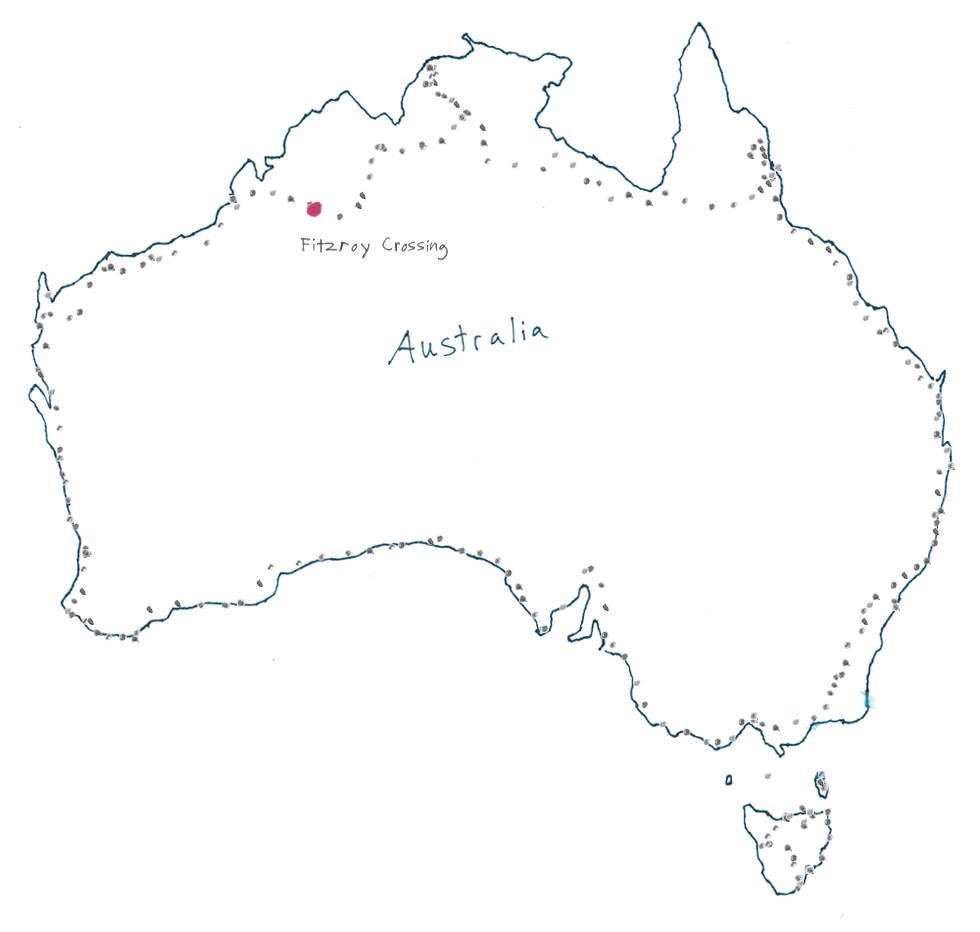 Woke up in the creekbed around sunrise. The ants were everywhere. Seems they really like water. You could spill a few drops on the ground and a couple minutes later the spot would be covered in ants. I had left my coffee cup out the night before and forgot that it was full of water. There was a stream of ants running in and out of it. I pulled the lid and there was about a 2 inch thick "ant cake" filling the bottom of the cup. I threw the whole works in the direction of a tree, the "ant-mass" splatted against a tree...Grubby and I both going "ewwww!"

Got out on the highway and Grubby was on the other side of it for some reason. I started down the road and a motorist stopped to see if I needed any water. I said no...today was going to be a short day into Fitzroy. He looked at me with a bit of a reserved look and then asked about "my buddy". I said that he'd be turning around once he gets done stretching. The guy left a little confused and I road on. Grubb bikes over to where I'm at and asks where I was going. I get ready to say "Fitzroy", then see a Telstra sign that I'd seen last night. You see, most of the time I camp on the left side of the road. Last night however, we were on the right side of the road. So when I started out today I just went off to the left...which was the wrong direction. Doh! We laughed about that for awhile.

About 20k east of Fitzroy there was an Aboriginal mob in a field, all sitting down drinking beer. We pulled up and talked to all of them for a long while. Right before we left one asked if I had a camera, so then I started taking all kinds of photos. One of the older women, Maxine, gave me her address to send her copies of the photos. Anyway, they told us about this festival going on in Fitzroy. A lot of bands playing and a lot of footy (rugby) going on.

Grub and I got into Fitzroy and were sitting in front of the grocery store. It was pretty busy, since hundreds of people came from all the nearby Aboriginal communities. One guy came over and sat down next to me. He was pretty drunk, but we still had a decent conversation. Out of the blue he said in a southern drawl, "he there goddammit". I turned to him and said that was a pretty good American accent. I spent the rest of the time teaching him how to use the word "dude."

Biked back out of town to the posh caravan park. At the caravan park I started talking to this guy and discovered that his brother Nuno had this band in the early 1990's called Extreme. How funny, I must have heard "More than Words" a zillion times in high school.

Later that night we road back into town for the festival. That was a lot of fun. The first band played a lot of covers from Thin Lizzy to Bryan Adams. Everyone was dancing about. I was doing my best to do the euro-trash dance as if I was trying out for as an extra in a Prodigy video or something. There where about three women in their 50's who kept grabbing me to dance with them, then another would grab me to get my attetion. Pretty soon I was dancing with all three women. we ran into Eric and Maxine and talked to them awhile. Ended up buzzing back to the carvan park and crashing out....way tired. Probably going to stay tomorrow and probably the day after since Simon will be showing up and will probably need a day off.