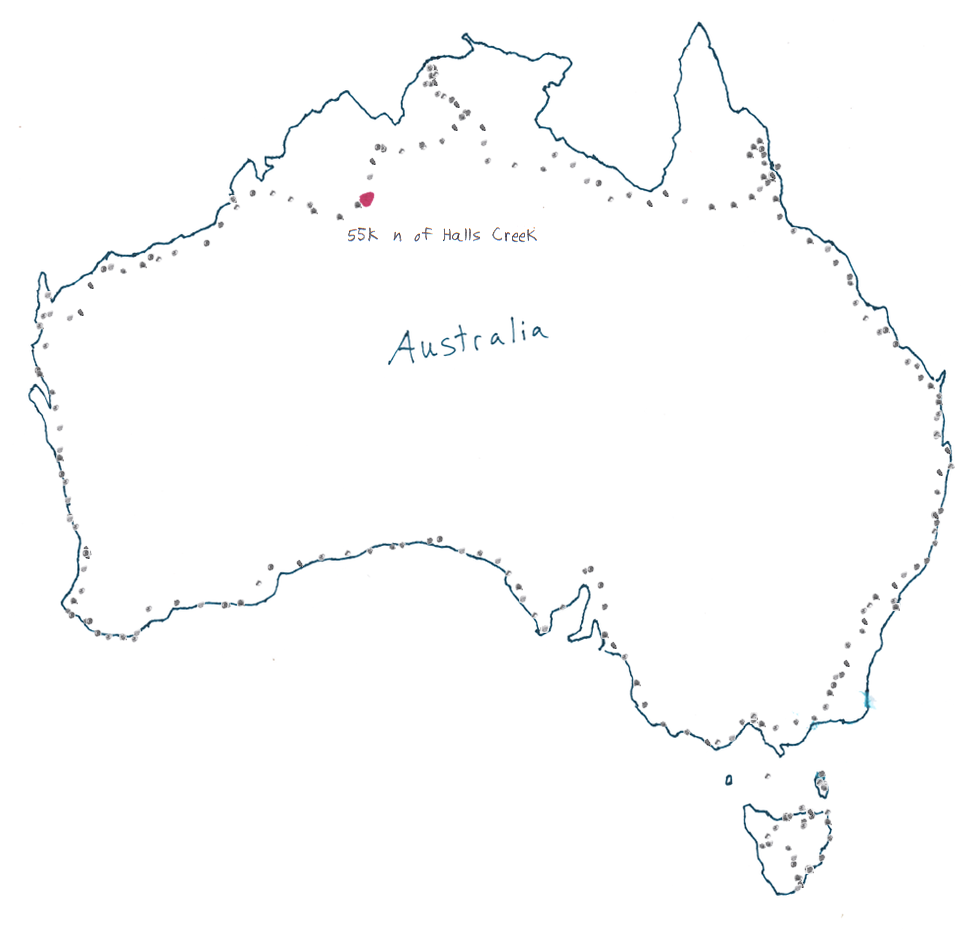 Last night I was going to the bathroom and this Aboriginal guy flagged me down. He'd gotten off the greyhound bus earlier and had been standing there with his suitcases for the last couple hours. He asked if I had a car to which I didn't. He needed to go about 5k down the road to the Warmun community. I told him I could ride down there and get someone to come pick him up. He said that would work and I rode down there and into the community. I rode past some kids playing with a basketball under a lighted outdoor court. They yelled "White" and started running over in my direction. I was obviously a bit out of my element there. As I was talking to them some other guys across the street sitting in a car yelled in my direction. I went over there and explained the situation. The guy said something to the driver which I didn't understand. He said "ok". They started the car, along with the most recent Eminem album and took off. They passed me during the ride back to the roadhouse.

Anyway the next morning Grubby and I are eating breakfast with the sun already telling us we needed ot leave a couple hours earlier. A guy came over to me and said he saw what I had done last night and wanted to get some of the Karma back...so he gave me his bathroom key as a thank you gesture...the bathroom keys had a 10 dollar deposit. cool..

Headed out of town after a stop at the garbage dump. Didn't find anything interesting except this brick wall of flattened cars where each brick consisted of about four or five flattened cars.

Passed a creek crossing and my front tire was going flat. I saw it had a thorn in it earlier...now the thorn was getting down to business. During the time I was fixing it, I started recording movies of cars and road trains driving through the water. Maybe I can make "Australia's most dramatic creek crossings" or something. One car drove through the water, stopped, and a guy got out. The car drove back through again and then across the creek a third time with the guy taking a picture. They needed that "Australian outback" sort of photo. A Landcruiser came by and stopped. About six Aboriginal guys got out and went swimming in the creek. We talked to them for awhile. They were on their way to Halls Creek to buy beer. We told them to save one for us.

Later on we stopped at a rest area. Met a couple girls there on their way to Darwin. (hi!) They fed us some sort of food I'd forgotten about, I think they were called vegetables.

Not long after we left the Aboriginal guys were headed back our direction. They stopped and gave us each a beer. We sat there drinking and talking about honey bees, Tiger Woods and arguing over Micheal Jordan's age.

Rest of the day was pretty uneventful. Pushed it a little farther so we could have an easier day into Halls Creek. I'd broken a couple spokes over the day and had to fix those, bike seems to get a little poopy about having to have so much weight on it. Lazy thing...

Road trains and cars going through a creek. Grubby and I giving commentary. Flies buzzing around my head.
October 5th, 2002
110km
68.2mi