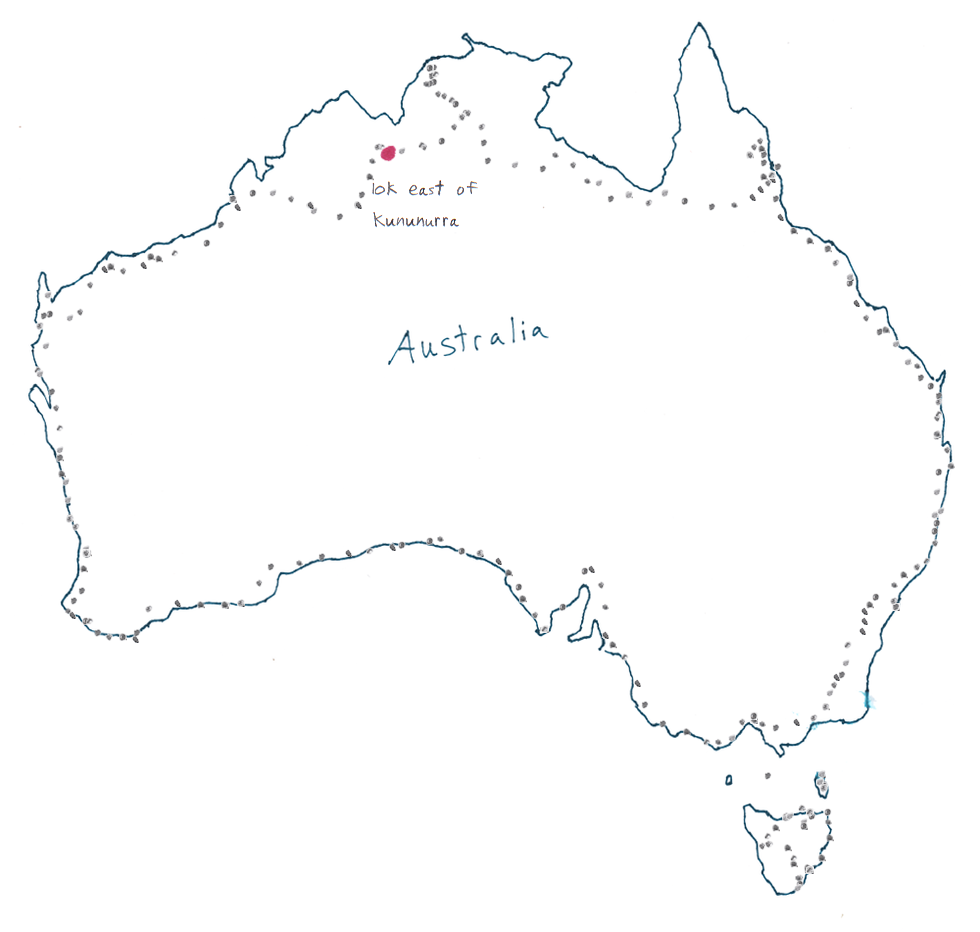 Didn't get up early like I planned, but what else is new. There was an interesting rock formation on the other side of the highway, would have missed it had I been up early. Farted around till 8:30am and got moving, unable to get the mental image of all those rock stars singing "We Are the World" with the big headphones on.

Had pretty fast ride for most of the day, didn't dismount the bike until 75k later when I got to the West Australia border. Stopped at the rest area there, talked with a bunch of kids in Combie vans as I ate up the last of my fruit. Had some time to kill so I figured I'd go do the confluence that was about 2k from here. Ditched the bike in the bush and found took off towards the confluence. It was up a hill, hadn't seen one of these in awhile. Got the confluence pics and made my way back to the rest area. Made lunch and talked to this German guy there. Seems that a lot of tourists really get gouged when it comes to mechanical problems, and that a lot of people get stuck in Tennant Creek.

I got to the border station and the woman asked me a few questions. It was a bit weird talking to her, she kind of acted like I was setting out on my first bike trip ever. She said that it was 40k to Kununara and there was about two hours left of daylight. I mentioned I'd probably just camp in the bush. She said that there are a bunch of Aboriginal communties around and to be careful...though most should be ok. Later I thought about being a smart ass and asking her if there was any chance the Aboriginals would hunt me with boomerangs.

The scenery started to change, many rock formations around. A large bush fire was burning a couple ridges over. I soon made camp on the other side of the hihighway since I wasn't keen on having a bush fire at my doorstep. Fire soon died out anyway. In the tent now reading "Bury My Heart at Wounded Knee" which I found at the hostel in Katherine. Hopefully I got all the mosquitoes and ticks killed in the tent...don't want the buggers having Thanksgiving on me tonight.