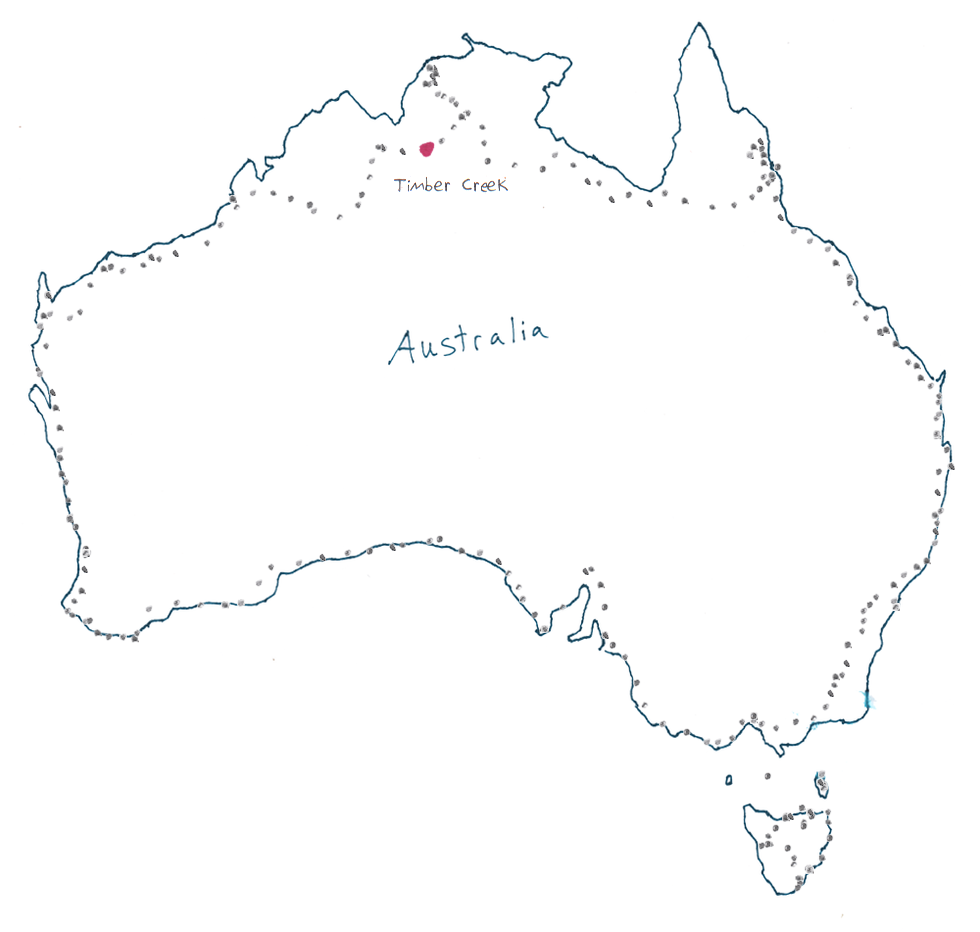 Woke up around 7am. Flies showed up to work early and were covering my tent, just waiting for that zipper to open. I crawled out of the tent and they all attacked me...thus I decided this was not an optimal spot for morning coffee. Packed it up and biked the 15k into Timber Creek.

On the way into Timber Creek a car passed me with a big yellow Kayak on top. It was Rad, a guy I met yesterday at Victoria River. I eventually pulled into Timber Creek. Talked to Rad for awhile, he gave me a bunch of Oranges. The WA/NT border is a couple hours away by car and you can't take any fruit or veggies (even honey!) into the state.

I went over to the service station and got some french fries...sounded good for some reason. A beer probably would have been a healthier breakfast come to think of it. (I ate oatmeal later...don't worry). Took a shower at the caravan park there ($2.50..a bargain for clean skin). Found the supermarket and bought some cookies which I am 99% sure I was overcharged for. The woman seemed a little tough and grumpy so I chickened out in calling her on the mistake.

After sitting the little park for awhile a guy came up to me and said hi. His name was Simon and he was from Melbourne. Turns out he is also cycling a "big lap around the island", but on a three wheeled recumbent bicycle. A wheel bearing went out and he had been stuck here a week waiting for a replacement. We started talking and found out we had a lot in common...he had even seen the humanclock site. I made coffee for us and we spent the rest of the morning at the picnic table.

Simon saw a SUV pull up and hit had the ABC radio logo on the side. The ABC is the public radio station down here in Australia. A girl in her 20's came up to us and said she was doing road interviews of people and wanted to know if she could interview us. I also used it as a chance for the shameless self-promotion of the clock site also. Simon did his interview first and I did mine after him. (Don't know when it will air but maybe I can put a copy of it here sometime in the future.) Got a clock picture of the girl between two 55 gallon drums marked "rubbish". The girl had to go on to another interview, she didn't know if she was going to stay in Timber Creek or not. Simon told her not to stay in Timber Creek since it was kinda dull. After she left I pointed out to Simon that this girl was quite attractive and just what in the hell is he doing telling her to stay somewhere else for. Simon realized his mistake (ha ha). By then it was in the late afternoon and I decided to just "piss the rest of the day off" and stay at the caravan park with Simon. We got a 1/2 case of beer, went through that pretty fast, swapping stories ranging from who can play the worst record in their collection to stories of overcharged capacitors blowing up hot dogs.

With Simon whom I had just met. I took a couple clock photos with Simon and then with a girl who was working for the Australian Broadcasting Service. We ended up drinking a bunch of VB beer.
September 28th, 2002
17.92km
11.1mi