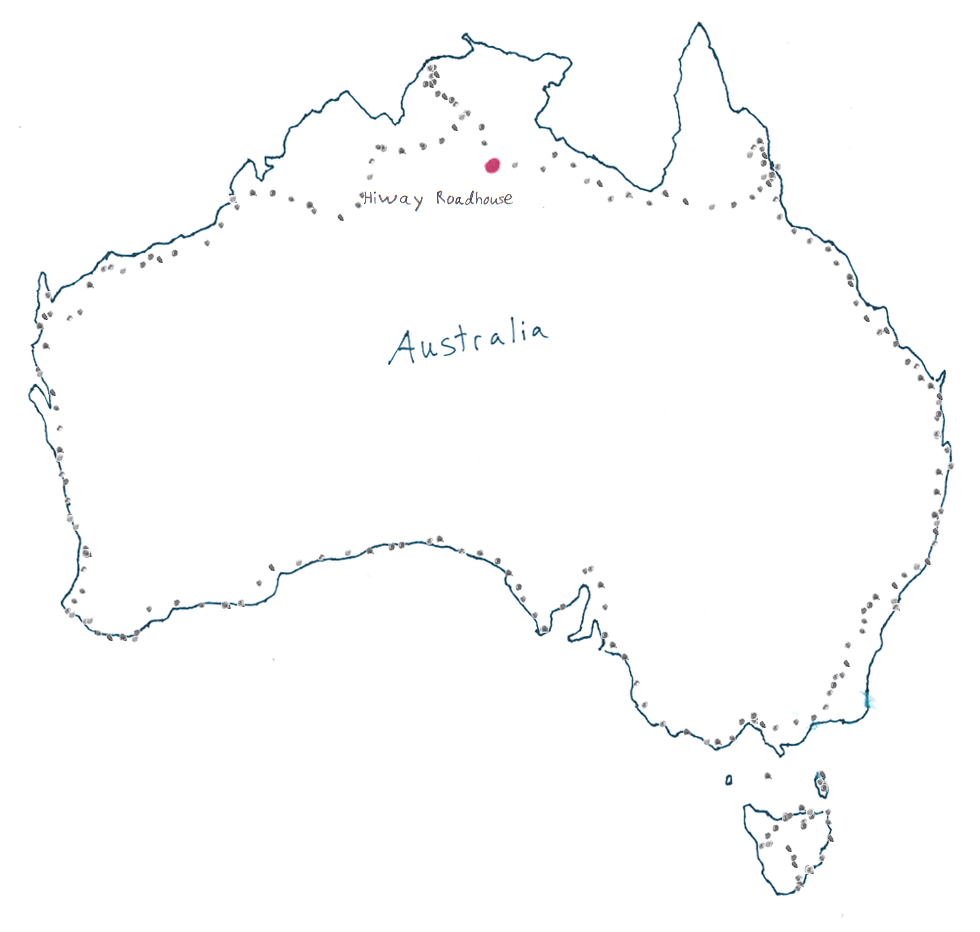 Slept in due to going to bed so dang late last night. Ate the rest of my Milo...dry. (powdered chocolate energy drink mix) Gotta bring more food, second time I've been close to being out. Reached the third rest area and cooked up the last of my food there. After months of carrying the book around, finally finished Chapter 1 of "Lord of the Flies", then again, I was starting to feel like Lord of the Flies with all of them buzzing around me.

The rest areas here have these large water tanks, and they ask that you fill up some of the containers for the birds. I did this and two seconds later all of these finch like (lovebirds?) come swooping out of the nearby trees for a drink. They were having a grand old time till the bigger birds came in and took over, pushing the little guys out. Eventually the little birds found one of the other containers of water. Birds were pushing and shoving trying to get at the water, some order was really needed. I tried to get them to all stand in a line and wait their turn, but they all kept flying away everytime I got close. Oh well.

I was really wanting to get to the roadhouse and counting down the clicks until I got there. About 15k from the roadhouse, I started hearing a hissing sound...yup, tire was going flat. I said some bad words, mostly because I was tired and really hungry. I dug up an old tube that I hadn't used in awhile and fixed the tire. That tube must have had a slow leak in it because it started to go flat again. I cursed again, but refused to stop and fix it...I was hungry! Pumped it up and rode standing up all the way into the roadhouse.

Got to the roadhouse and talked to a few people. Saw a guy filling up and I yelled "Steve!". It was a guy I met at the caravan park in Boolorolla a few nights earlier, we talked about a lot of stuff...including his epic-ly long hang glides in South Australia across the desert. He had been here for two days fixing his tires. I discovered that the roadhouse didn't have much in the way of store-type food...so Steve gave me a bag of rice and a can of beets. Yay, real food! Ate inside and a couple bought me a beer. They asked where I was from and I said Portland, Oregon in the US. They said...oh, we have friends from Grants Pass, Oregon. Here I am in the middle of freakin' nowhere in Australia and I hear "Grant's Pass, Oregon"...weird.

Fixed my all my tires and flat tubes in front of the roadhouse. This is the classic roadhouse in the sense that it is the only thing for quite a distance and everyone usually stops. (well, the famous Daly Waters pub is just up off the highway). The owners were out front. One guy was razzing me about being on the bike and how he would rather drive. A greyhound bus pulled up to pick up a guy. I said to the guy razzing me that at least the bike was better than riding "that thing" (me pointing to the bus). "Ya gotta point there, I think I'd rather be on the bike in that case also".