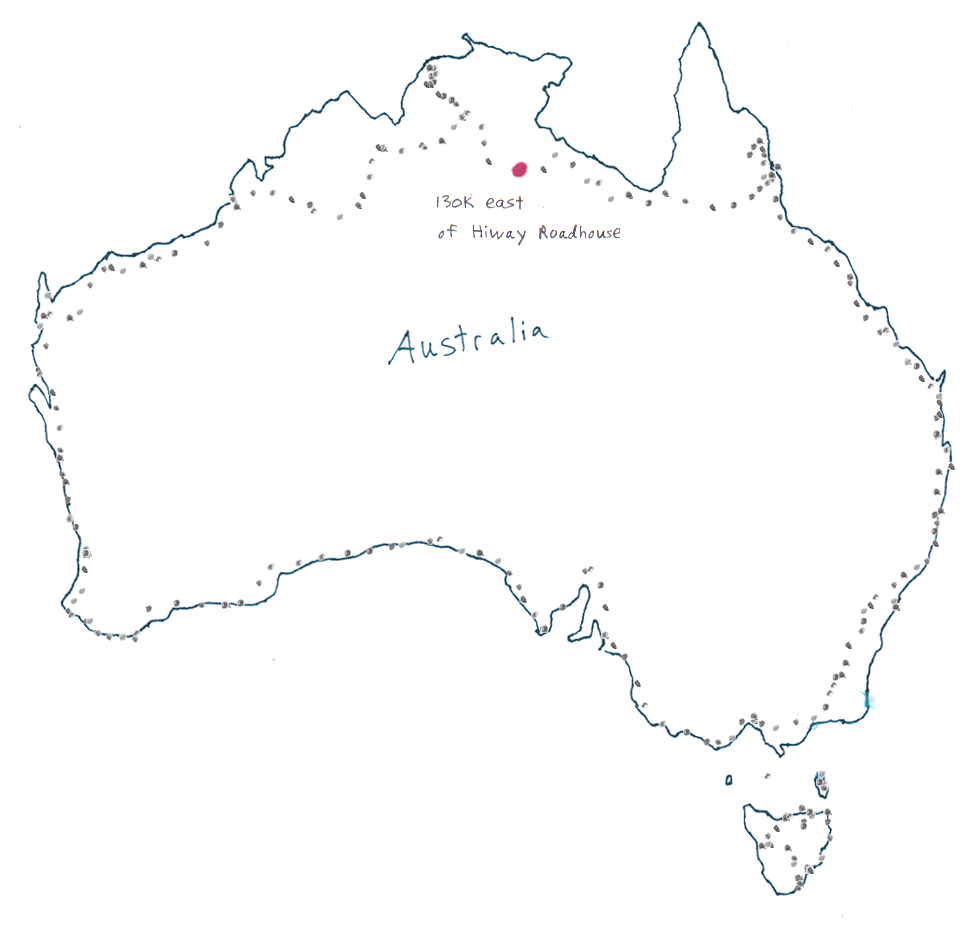 Had a hard time getting motivated today, mostly because I stayed up late the previous night and was a little sleepy this morning.

Ran into a guy who I saw in the Caravan Park in Borroloola. He is a sign maker and just got done with a stint in Borroloola. He said he was pretty impressed with how fast they made decisions in that town. There is a town down south where they are wanting to build a three-story outhouse, it has taken 10 years and nothing has happened because there are too many negative people dragging things down.. He said that in Borroloola, they were thinking about making signs to put out on the highway at the turnoff 270k away. Within two weeks they had all the stuff ordered from Darwin and this guy made the signs, and he was now on his way to go put them up. He laughed they would have gotten it done sooner, but there was a rodeo or something that they had to take care of first. Anyway, he was listening to Johnny Cash on the radio. "Folsom Prison Blues" came on and I kinda looked into his car. "JC got going there...and that isn't Jesus Christ". The guy referred to Johnny as JC throughout our conversation. He gave me a two liter of Pepsi and drove off.

I reached the first rest area, ended up spending about three hours there eating and taking a nap. Met a guy named Ian and we had a good time busting funnies with each other. By sunset I had only gone about 100k, enough for a normal days ride...but I didn't have as much food with me and needed to go at least 140k otherwise I wouldn't make it to the next roadhouse in time. Made dinner and loaded up some new tunes on the mp3 player...and rolled off into the night.

It was a nice three hour ride in the dark, listening to Townes Van Zandt and Tom Waits. I can't really listen to slower music in the daytime, but somehow it works better at night. Saw only a couple of cars. I would get off the road when I saw them coming, they must have thought it was quite odd to see some random guy on a pushie at 1am in the middle of nowhere.

Got tired and pulled off the road and was asleep pretty quick.