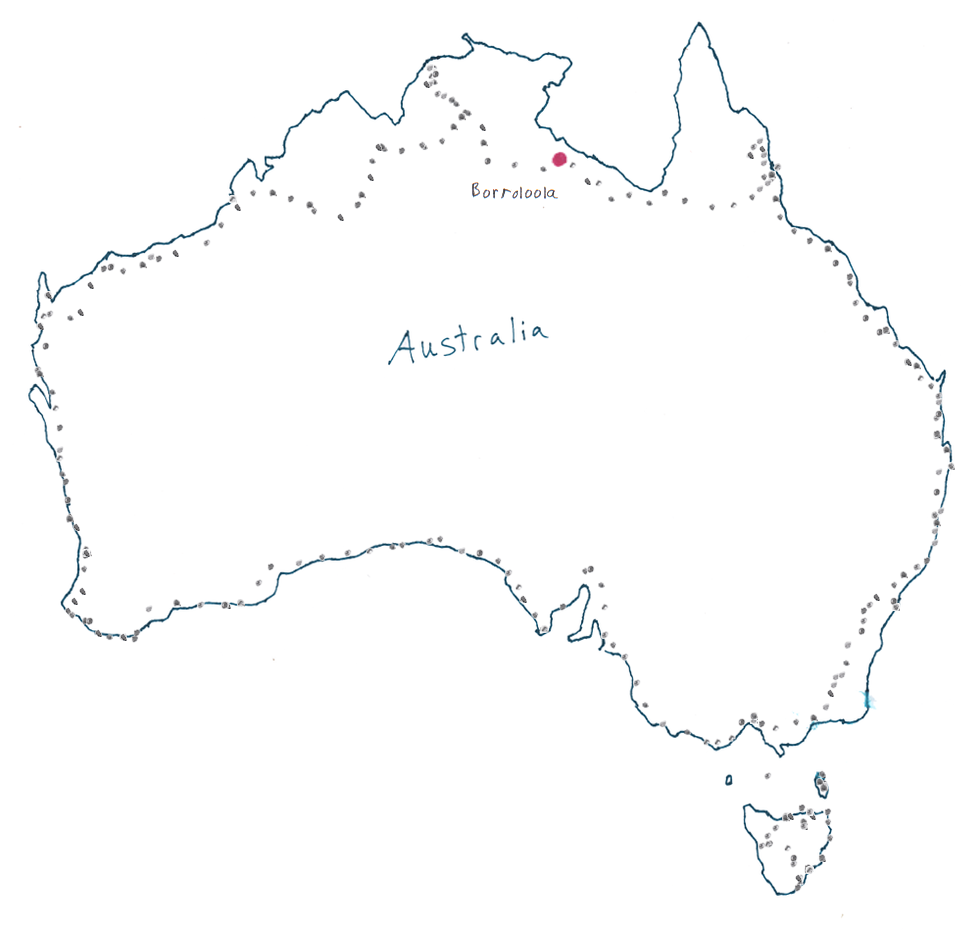 Today ended up being a pretty long day. Was up pretty early, but went and had coffee with Ben. Mick and Nick had taken the dogs out in search of a pig...they found one. I thanked them (thanks again guys) and headed out around 9am. Had a nice morning ride since the road was pretty good. I knocked out 30k pretty quick and figured if things kept going the way they were I'd be in Borrololla around 2pm. They didn't.... Got a flat tire awhile later, same old rim puncture. Kind of hard to avoid rim punctures with all this weight on rough roads. I ended up stopping to make lunch...plain rice. It was pretty much all I had left to eat. I spent about an hour there. Good thing I picked that time to stop, because in that hour, five road trains driving very fast came screaming down the road. Had I been on the road I would have had to be scurrying away from the road once they were coming. Instead I sat in the bush and took pictures of them going by.

The road turned to crap again, thick bulldust roads that almost knocked me over a couple times. It was starting to really test my patience there for awhile and I wasn't having that good of a time. I got about 30k from Borrololla and saw a small sign at a creek that read "Macpherson Creek", I thought of Elle. When I passed the westward facing sign awhile later, I turned to look at it and noticed an extension off of it with the letters whited out. "Elle". I laughed and took my electrical tape and put Elle back in. Ended up removing it again after I took a photo, so I can't be considered a vandal (but it was and "enhancement")

The last push into Borrololla seemed to take forever. The road was terrible and bouncing me all over the place. Dust was everywhere. I finally got to the paved road and into the town awhile later. There is a bush fire burning out west and it made for a pretty sunset. This town is a bit run down and there are barbed wire/chain link fences around a lot of the places. Seems to be a pretty rough Aboriginal town. "2 Pac boyz" and "little homiez" were spray painted on the road...good old American culture making it's way around the globe.

Was going to hang out in the morning here but will probalby just head to Cape Crawford. At least it is paved the whole way so the ride should be a little smoother.