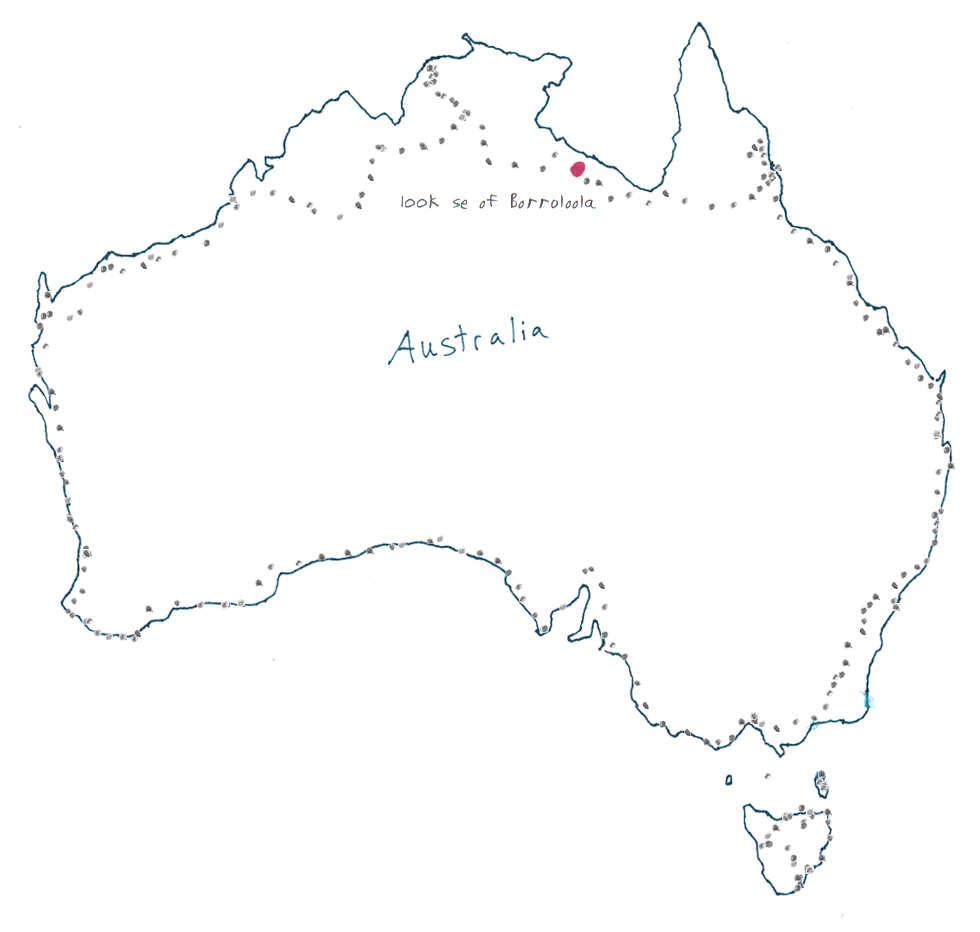 Today ended up being pretty good. Got up early and was rolling down the road. I was really lacking food, so it looked like I'd only get two meals today. Got a flat tire around 11:00am and decided that would also make a good "brunch" stop. Food was plain pasta and rice with some vegemite thrown in. Road revolved between being good and being crappy. Had to get my feet wet in the Calvert River...the horror!

Towards the mid afternoon the road got really terrible. It wasn't corrugated, but had a good couple inches of this dust on it that made me almost fall over a couple times. I got off the bike and started pushing because it was easier than trying to balance on that stuff. A ute pulled up next to mee and slowed down. I waved and the guy stopped. He got out of the ute and looked at me..and said "fucking bloody hell!, you are about the last thing I'd expect to see all the way out here!". He offered me a beer but I declined. Lacking food and it being hot I didn't want to mess myself up. He said that he and two other guys were camping up at the Robinson River, but that was about 50k away and I probably wouldn't make it there tonight. I told him I'd make it if the road got better.

Knowning that I could make it to the river before dark my spirts perked up a little. Eventually the crappy road got better and it was rideable. I got another flat tire awhile later, same old typical snakebyte puncture. Really needed to eat something so I nibbled a little more on the remainder of my chocolate bar and ate the remainder of my vegemite with my fingers. Got into a good crusing speed and eventually reached the river about 6pm. Found the place where the guys were camped and set my bike up next to a tree. The one guy looked a little suprised when he saw me. I said "how ya going...ok...I'll take you up on your beer offer now!" They were up here on a fishing trip, Ben, Mick and Nick. They were getting ready to make dinner and asked me to join them. This worked out good since I was low on food anyway. Had a "backup dinner" as mick called it...since they didn't catch any fish today. Ended up having a few beers with them and we talked for a few good hours, telling all kinds of crazy stories..a nice end to a long and pretty demanding day. Tomorrow I got to the town I always have to look up how to spell it...Borroloola.