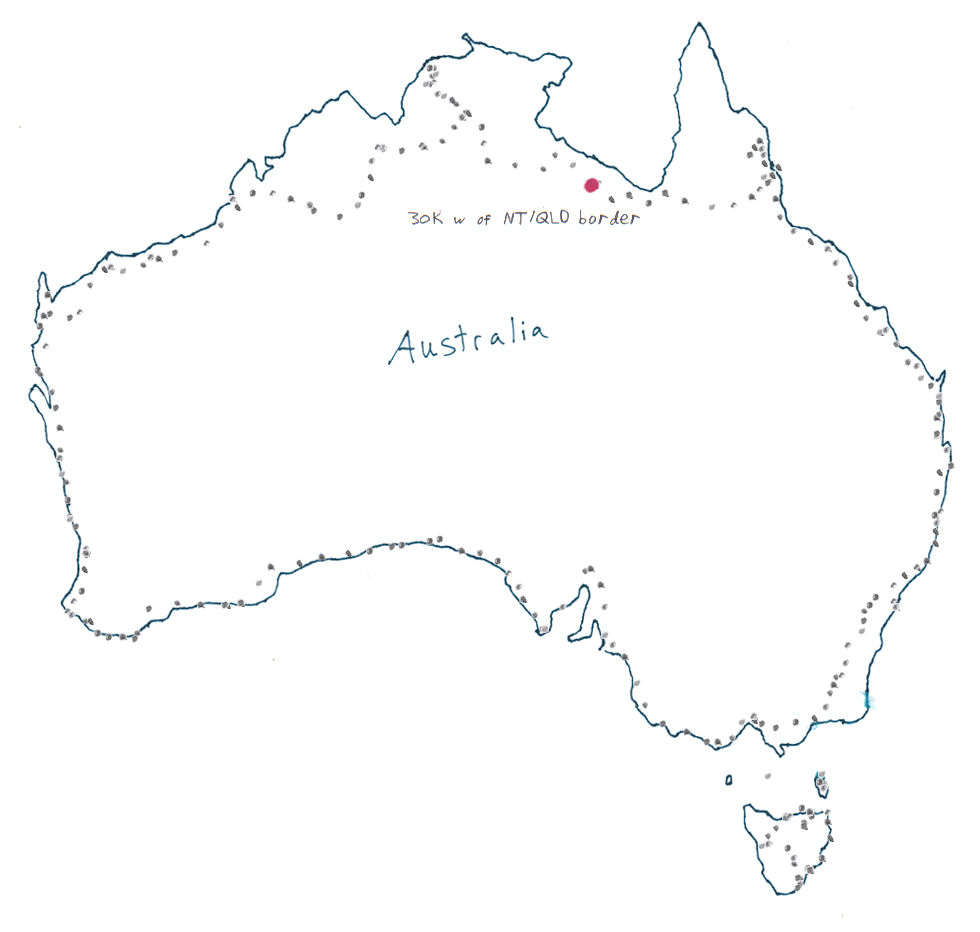 I'm in the Northern Territory. First saw it on a map when I was a kid...now I'm here.

Today started out pretty good and turned to crap as the day rolled on. Got to the border around mid morning...took a few photos. Talked to a couple who were headed up to a cattle station. They said they had been watching my tracks on the road for the last 30k or so (about where I pulled back onto the road this morning). He said they couldn't figure out what exactly they were, too wide for a standard bike tire, but not big enough for a motor bike. We laughed about how the tracks kinda went all over the road, with me constantly trying to find the best spot to ride on. I was thinking about it and figure I probably gain and extra k or two in all the going back and forth.

Got to Wollogorang station around 11am. Got some food there and read through their book of history they had there. The cattle station is 7000 square K in size. I ended up being there about four hours. I don't really know exactly where the time went. Made a phone call and had to totally reorganize the bike again because I needed to balance out the five gallons of water I need to get to Borroloola. Food is pretty expensive here, but then again, it is a heck of a long way to any sizeable town. I could have brought a lot more with me, but I also kind of like giving my money to the people who run these tiny roadhouses in the middle of nowhere.

I was told that the roads get better west of the Roadhouse, so far I have yet to see it. Still deep sand in places and rough going at times. I was in a pretty foul mood for awhile, kinda hot and tired...and I had only gone about 40k so far. Got a flat tire, fixed it...then got another about 15 minutes later. Argh. Lots of flats yes, but then again, I am carrying a lot of weight. Came across a guy who was pulled of the road and his ute was jacked up. Turns out his rear tire basicaly fell apart and he was putting on a spare. He was just finishing when I got there, so I talked to him a little. He was headed to Normanton, probably get there tonight. I mentioned that it took me a little under a week to get here from there. He came from Katherine this morning, I won't be there for another seven days or so.

Stopped when it got dark and made dinner. Batteries in camera are acting screwy, then my stove was acting screwy. Don't have as much food with me as I normally carry...going to be running a bit thin into the next town. Maybe I should have bought the $10.00 jar of peanut butter. (I actually would have...bought I forgot about buying lunch food, doh!)