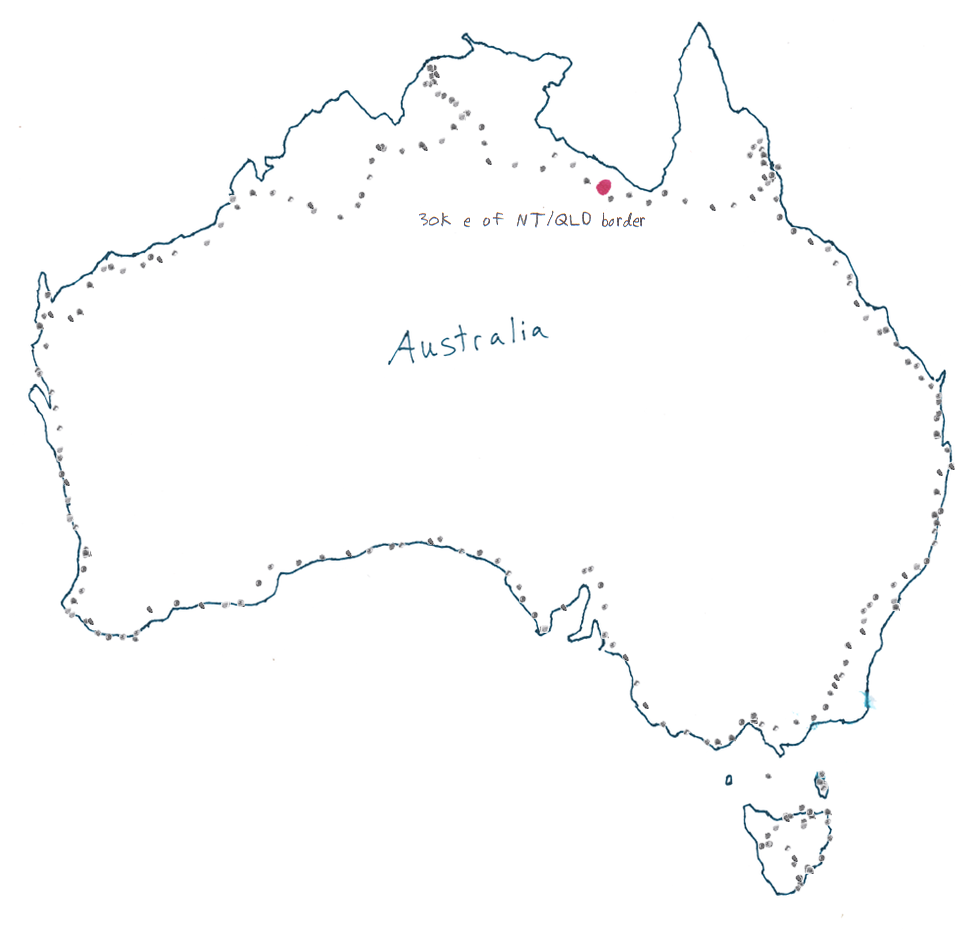 Got up and going a little late. Got in a whoppy six k before the rear rack broke again. Like the in Geto Boys song..."I can tell right now it's going to be a long day" This time the main support on the rack broke completely, so I taped it up. The road was pretty bad in places, full of deep dust and corrugated like you wouldn't belive. Usually there is one thin spot somewhere on the road that isn't all beaten up...but this time there wasn't.

Saw a car up ahead stopped on the side of the road. Got closer and there were some Aboriginals there with a flat tire. I stopped and talked to them for awhile. Seems their spare was flat. Tried pumping it up with my bike pump but as it got more pressure, the valve stem leaded. They had someone else coming with a tire anyway. They offered me a beer but I declined...since it was already hot and I was a little dehydrated all ready. Talked with them for a long while. One told me about how they have ceremonies going on up north pretty soon. One of the rituals is basically a circumcision one. You basically sit there and watch them do the cutting, ouch! No numbing or anything. I asked the one guy if he had it done..."yep, when I was 10" (If I remember correctly). Robert (one of the guys) asked if I had a camera...wanted me to take a picture of them. I did, got a clock picture of them also. Another car pulled up and some people got out. One of the guys said "Hey Craig!" I'm definetly getting known around here.

When I got to Hells gate I ran into an Aborigine guy I met a couple days earlier..."Hey Craig!". I got some food and spent a couple hours at the roadhouse reading the papers and catching up in the gossip mags. Billy Bob Thorton, what a bad guy you are. I went to the bathroom and saw myself in the mirror..."DAMN!", I looked disgusting. All of the dust clung to my sweat creating these dark splotches all over my face. Ended up taking a shower there. When I asked the guy how much for the shower, he just asked me to throw a couple coins in the RFDS (Royal Flying Doctor Service) donation box near the wall. Over on the wall were a bunch of different photos of the Roadhouse during the wet season. The place looked entirely different. Several inches of water were piled up in areas that are currently nothing but dust and weeks.

Moved on up the road for another 25k and found a place to camp. My rear rack was going screwy again and I kept hearing the WHUMP WHHUMP sound of it rubbing against my tire. Good thing I hung onto my fenders, because I rigged up the rods from them to act as splints...maybe this will hold me for 10 whole K before the rack breaks again. Oh yeah, tonight is my last night in Queensland, should hit the Northern Territory border tomorrow morning. I'm told that the roads instanty improve when you get to the NT, since they are a territory and get federal money and such.