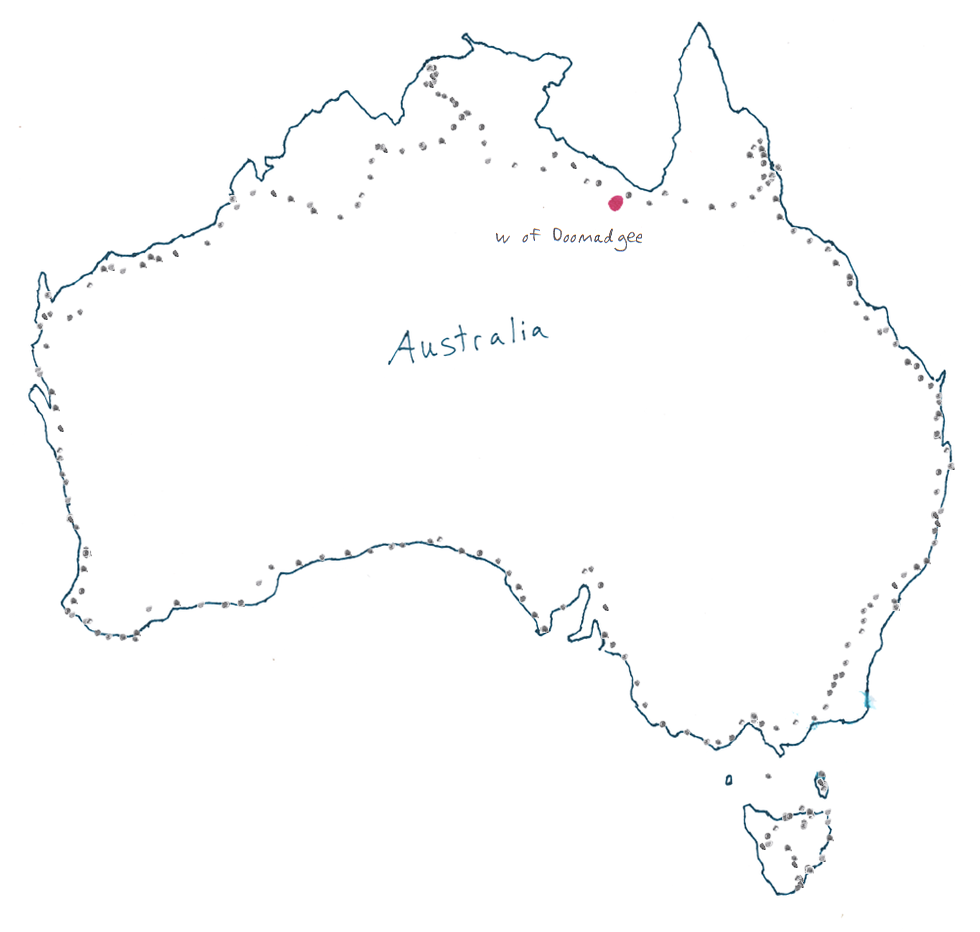 Got up and going about 6:45am. I got up about 5:45am and there was already an older couple setting up a table for breakfast.

Headed out of town, a little sleepy but it was a nice morning. Stopped for an hour near a tree and an excesssive amount of cow poop.

Pretty much everyone seems to wave when I ride by them. Listened to the Australian Public Radio this morning. Same little issues pop up down here, certain party leaders quit, rugby teams cheat by ignoring the salary cap, etc.

Most of the cars that passed me were Aborigine, since there the town of Doomadgee is an Aboriginal settlement of about 1200 people. About three cars stopped, asking me quiestions and offering a ride. The guys in the first truck were pretty funny. They asked my name and I said Craig. One of the guys said "ha!, we gotta Craig in the backseat, and Craig waved to me. They asked if I wanted a lift and I said no...but thanks. The guy got out of the truck and came over and was all ready to hoist my bike up onto the back of the ute...but I said no. Haven't taken any rides yet...would be cheating. They laughed and drove off.

I was thinking about how the bike seemed to be running ok, then everything went to crap. The rack started rubbing on the rear tire, the bolt worked it's way out. I stopped and pulled everything off the back of the bike (first of three times today). I had a bolt that I bought in Mt. Garnet and put that one in...it promptly broke after I put the first bag on. I briefly considered riding about 1400k (round trip) back to Mt. Garnet and returning the 35 cent bolt...but figured I'd just have to let this one go. ha ha. Ended up using the broken bolt and duct tape to hold it together. Got riding again and five minutes later my rear tire went flat. Patch from a few days ago didn't hold, maybe it didn't like the heat. Had to lug all the crap off the back of the bike again and it was a bit annoying.

I got closer to 18S, 139E which is another confluence poit. It looked to be about 2k on the map. There had been a barbed wire fence on the north side of the road, but when I passed the 139E meridian the fence was gone. I said heck with it and turned into the weeds and biked right through the brush, following the direction of the arrow on the gps. Got to the confluence point and took all the pictures and stuff. The amount of flies around was incredible, probably have had more flies on me in the last 7 days as I have in all my life.

Got back on the road and a few minutes later another truck pulled up next to me. They were asking me where I was going, had been, etc...and offered me a beer. I said thanks and took it, the woman ended up giving me a second one also.

Got into Doomadgee about 10 minutes after 5:00pm. This is significant in that when I got to the store I saw keys in the doorlock on the other side....closed. I ate my melted candy bar and headed back out of town.

Found a spot to camp in the bush. A fire had been here recently because everything smells of burnt weeds. Depending on how far I push tomorrow, today might have been my last full day in Queensland.