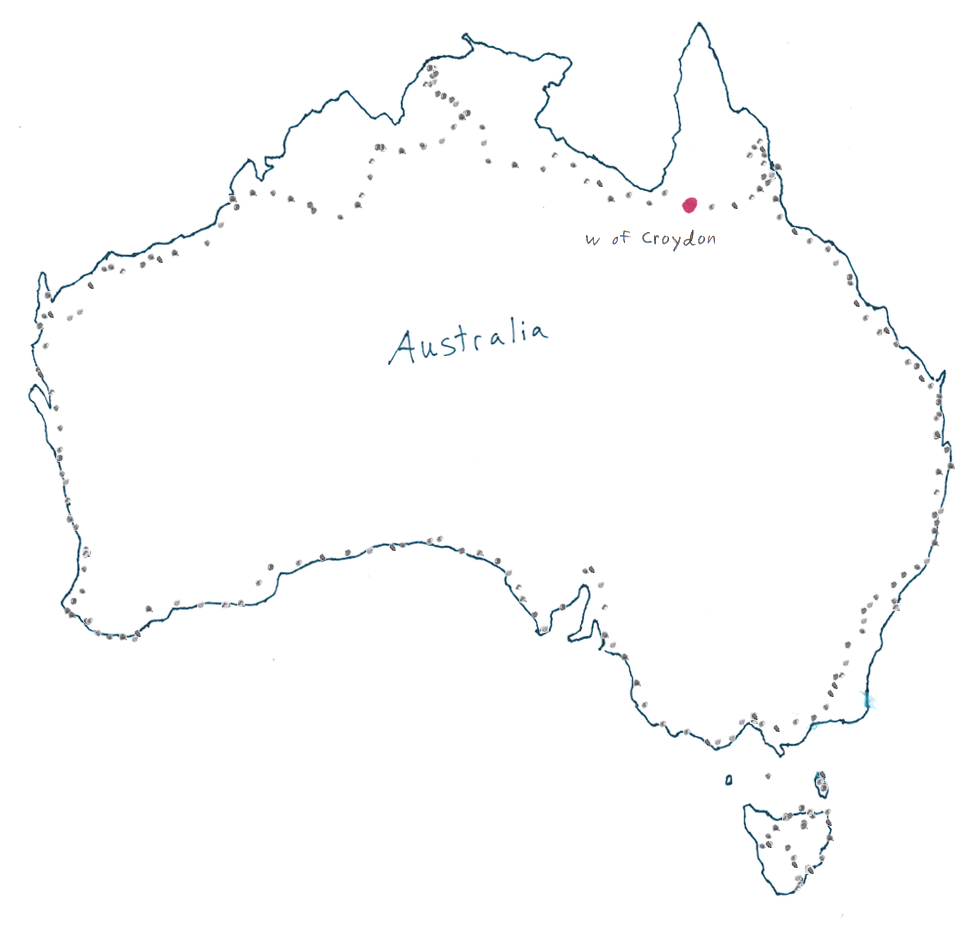 Quite a long day today. Got up and going a little earlier than yesterday. Heard my alarm go off at 5am but I was in this weird dream that I was in high school and wasn't allowed to wake up to the alarm or something.

Made my way down the road to Croydon. The only really interesting thing to happen was that I was listening to Prince's "Gett Off" on my MP3 player. The song well, you can figure out what it is about (quite a catchy tune also). I look down and here is this girly magazine. Yesterday it was the duct tape I found, today the girly magazine. (not that I needed nor kept this mind you). I read through the articles and put the magazine back down.

Was starting to get pretty hot by the time I rolled into Croydon. Ran out of water about 10k back...going to have to start carrying more. I circled around the town to see what was there. The town seemed to be about the same size as Georgetown, but Georgetown got boldface type on the map...I wonder why. Found a takeaway food place and went in. Turns out they stopped cooking food at 1:30pm. The guy wasn't too friendly so I bought a couple things and left. Went back to the BP on the highway and got some food there. After spending a decent amount of money there on food and junk food, I asked the woman if I could plug in my laptop for a few minutes while I ate. She sighed and said yes...I offered hr money but she said not to worry about it.

I made my way out of town, making a side trip to see the cemetery. I gave up after a couple K and turned around...too far to ride on a sidetrip. Filled up 9 Literes of water at the park and headed out of town. Right on the other end of town was this store that had a sign out front reading "Oldest Store in Oz". Although I was in the mind of leaving town...I decided to stop and have a look around. I was glad I stopped because it

was an interesting little store. It had a little bit of everything inside, including a better (and cheaper) variety of takeaway food. The woman who ran the store was really nice. I was kinda bummed I already dumped $16.00 on the other two stores....this woman was really nice and I much would have rather given her my business. There was a "hardware" section of the store that had a wide variety of loose tools and nuts/bolts. I took this as an opportunity to fix the dang latch on my handlebar bag. The rocker pin has kept popping out every day for the last

4 months, really annoying me. I spent about an hour in the store rigging up a new one. Finally got out of town around 5:15pm...couldn't believe I had spent so much time in town.

The ride out west was wonderful...I was full of energy and the scrubland was really pretty with the sun starting to go down. For awhile it felt like I was biking in the photo of a national geographic or something. Last week Peter (from Cairns) and I were talking about the confluence.org site and I remembered that there was a geographic confluence pretty close to the highway. I figured it out and it looked to be about 5k (3 miles or so). After a couple hours of riding I started closing in on the 142E

meridian. I glanced at the GPS and saw (what I thought) it go to 141E. I looked for a clear path heading north, kind of wanted just to check it out and see what the hike might be like. After a good 30 minutes of pushing through brush in the dark (and not watching the gps) I realized I was heading mostly east in parallel with the highway. (Doh!). After I got back on the

highway I realized I wasn't even close to the 142E meridian. I guess a GPS is no good if you don't read the numbers correctly. I biked on down the highway a little farther and saw a dirt road heading north! Yay! This was good, because I don't think I would have bothered with the confluence if I had to go on a 6 mile hike through the brush. The road wasn't on my map, but it headed directly north. I followed it until I started reaching the 18S latitude, then started taking a cow path to the west. The cows had beaten a lot of the area down so it wasn't as brushy as the last area. After 20 minutes of meandering through the area in the dark, I reached the confluence...and decided to put my tent door right on the 18S 142E confluence.

Tommorow I'm going to Normanton, home of the famous Purple Pub. Going to take the day off of there and catch up on journal/website stuff. Normanton is pretty much the end of this stretch of road, since it will then cut to the south on a gravel road up under the Gulf.