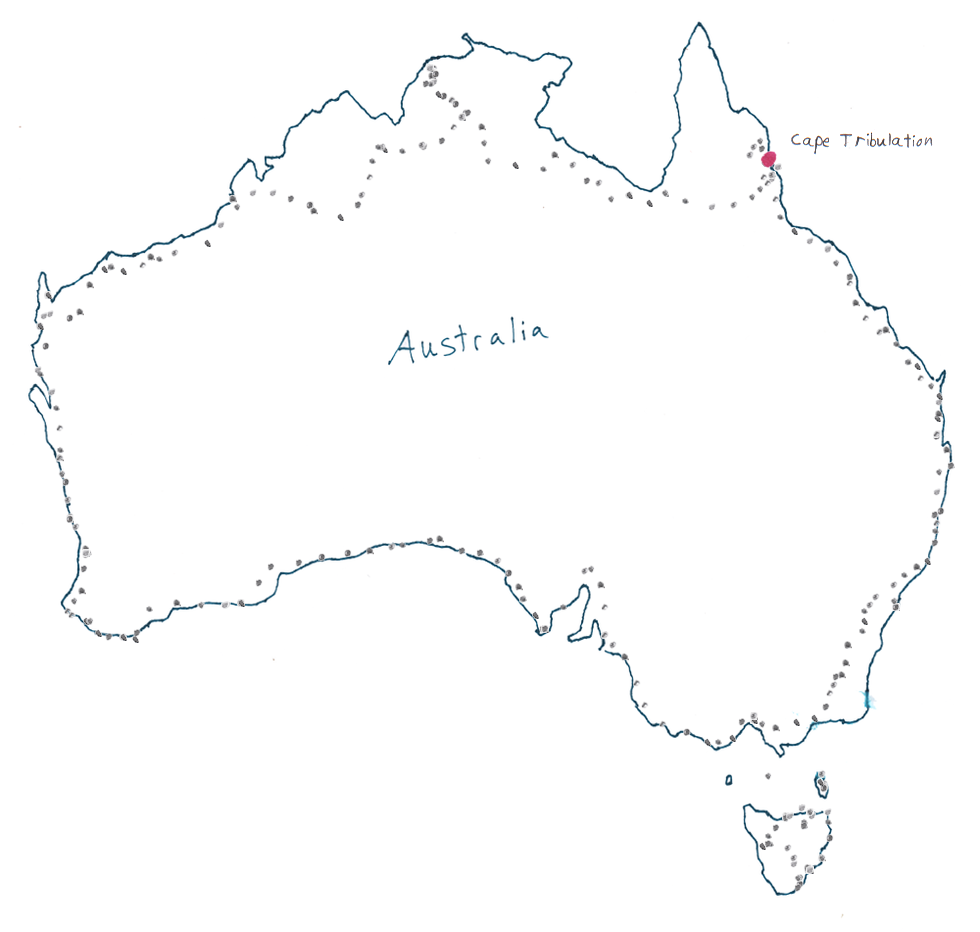 This has to have been the hardest day so far. Woke up this morning and realized I was sick with a bad cold...so I rode anyway. Got a big 2 litre of orange juice at the store in Ayton. A 4x4 pulled up to the market and a couple got out. The guy had a "Boston University - Medical" t-shirt on. Turns out they were indeed Americans, I think this ups my american count to 15 now.

Rode along farther and headed towards Bloomfield falls, but turned around since it looked like they were too far away. I kept riding up the road, waiting for it to turn into something of 4x4 quality. I passed several tourists who would either way or give some smart-assed remark. I think I want to start a band and call it the "wisecracking tourists". As I was climbing up one hill, a SUV stopped and the guy just said "are you mad or happy?". I didn't bother to stop since I was in the middle of climbing the hill and just yelled "happy" back. I was quite suprised that he rolled his window down thus increading the chances of getting a few specks of road dust on himself. At the top of the hill I stopped. There was a large Crocodile way down by the river, sunning him/herself on the shore. It was nice to see one of these critters in the wild for a change. Though I'm thinking it could have been stuffed and placed there by one of the "4x4 Rainforest Safari" companies that run tours on the road. I put up with more flak from tourists asking me if I knew what I was getting into with the hills ahead. I actually started feeling a bit bitter and just said "yeah, but I had worse in Tasmania". They kind of gave me a wry look and I just left. The last thing I need to do is take outdoor cycling advice from someone who spends 50 weeks a year in an office. Sheesh I'm bitter. I ended up having to dismount the bike and push it up the hill that was getting steeper and steeper. Although it was tough going, this was already one of the best days of cycling...simply for the fact that you got some sense of satisfaction for hard work. The road soon dropped the 600 feet or so and then started climbing again. On one of the hills a car pulled up next to me and they asked where I was going and then if I was the cyclist with all the computer stuff. I said yeah, I think they heard about me from another cyclist I had met a few days earlier...dunno, maybe they had me mixed up with someone else. Another couple came around the corner ahead and stopped. When I got up near them they rolled down their window. Instantly the whole area smelled like my Dentists office...that was the only thing I could think of. They asked if anything was ahead since they hadn't seen anything in awhile. I said yeah, but about 15 minutes later they came back around and passed me.

I saw a trail off to the beach and went out there. Took some pictures and then ate a late lunch. It was nice and I had the beach to myself.

I came to the conclusion that with the exception of the two creek crossings, this was not a "4x4" road. Sheesh, Dad and I drove roads 10x worse in his Chevy Malibu.

Eventually I rolled into the Cape Tribulation area. There was no camping available, just overpriced dorm rooms (more than Sydney even!). Since I felt sick I just got an overpriced dorm and called it a day. Bad thing was that was that I discovered that my GPS hadn't been recording my tracks all day...so all those beautiful plots of hills I climbed are gone gone gone.