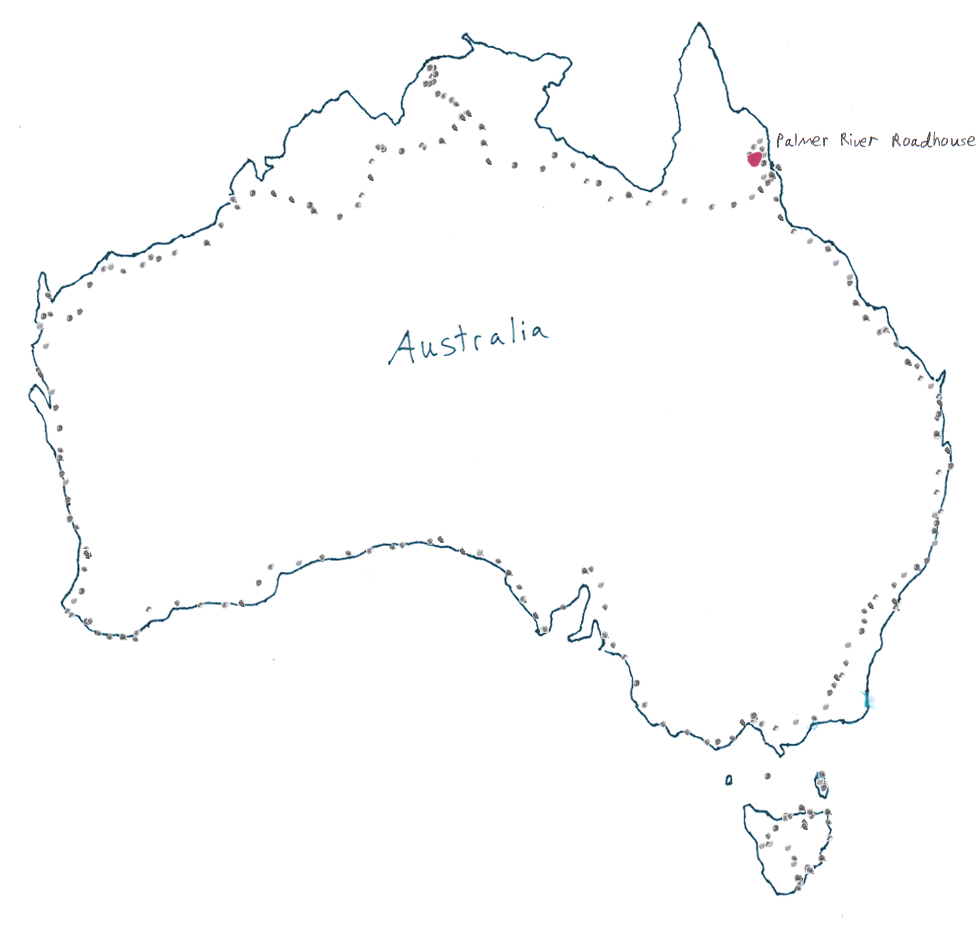 Wow, what a day this turned out to be.

Didn't get out of Mareeba until around 10am. For the first time in ages I was not riding on a major highway, just a minor backroad. The ride was nice...through a bunch of dry desert scrub.

After about 40k the bike got harder and harder to ride and eventually came to a screeching halt. The rear hub was locked up, yes, this is the hub I just replaced. My mood was not good to say the least. I was already running through everything I was going to say to the guys at the bike shop that sold me this bunk hub. I lugged the bike back to a turnout and tore it apart. As I was in my foul mood a bunch of older ladies pull up, they were birdwatching. I did my best to maintain a jovial mood front, disguising the fact that my rear hub was locked up and I might be stuck out here. I had to cover everything because everytime a semi truck would go past, it would spray dust all over my bearings and stuff. After a bunch of cussing and screaming and converting some nuts from a 16mm to a 15mm via a 15mm wrench and using my bike lock has a hammer, I was able to get the bolts retightened. I got back to riding but was in still a bit of a foul mood. Pulled into Mount Molloy. Wasn't really hungry but got a chicken burger and then asked them for a crescent wrench (or spanner as they call them down here). Got the bolts really tight on the hub and things seemed to be better.

The Camelback I bought is kinda cool, been drinking a lot more water as I ride and the "engine" seems to be running better. Loaded up on 7 liters of water and took off. Had a nice ride the rest of the afternoon. Looked like I wasn't going to make it to the Palmer River roadhouse so it looked like tonight I was going to be camping out in the bush. About 5pm I was riding along and a car pulls up next to me. The guys roll down their window and say "hey, meet us up at the Palmer River Roadhouse and the beer is on us!". I asked them how far it was and they said about 76k. I told them I'd be there by 8:00pm. I wasn't too worried about riding in the dark since I was on a road in the middle of nowhere and I had my trusty new headlamp. I kind of wanted to go to a bar in the middle of nowhere so it was a good incentive to ride a long day. Good thing I still had a full box of granola bars to fuel me for the next few hours. I rode pretty fast until I got to a large hill which took awhile to climb. Near the top there was this lookout. The sun was just setting so the whole valley below had a bit of an erie glow. The guardrail was covered in graffitti of people who had visited there. I actually added mine there.

It was a great ride the rest of the night, except for the times when cows would suddenly pop up by the road and both of us would be equally spooked. Because of this I didn't really open it up on the downhills for fear of hitting a cow.

The last 15k in was a bit of work but eventually I got to the roadhouse around 8:40pm. The two guys said "hey! It is the guy on the pushie!". They gave me a XXXX Gold beer and I took a couple photos. We talked for awhile. Turns out these two guys had just bought the roadhouse from a guy named Louis...who had ran the place for the last 23 years. They are having a big party here on Saturday night but I kinda want to keep riding. They have all kinds of stuff ofr me to do...like move furniture from the truck and hook up ocmputers. Once they found out I was from the US I was no longer "Craig" I was referred to as "septic" or as "monica". Ha Ha. I like these guys. We'll see how it goes. I eventually went to sleep on the restaurant floor about 1am, but the guys stayed up pretty late playing the jukebox extremely loud. I don't think I've ever heard Johnny Cash's "San Quentin" album so loud.