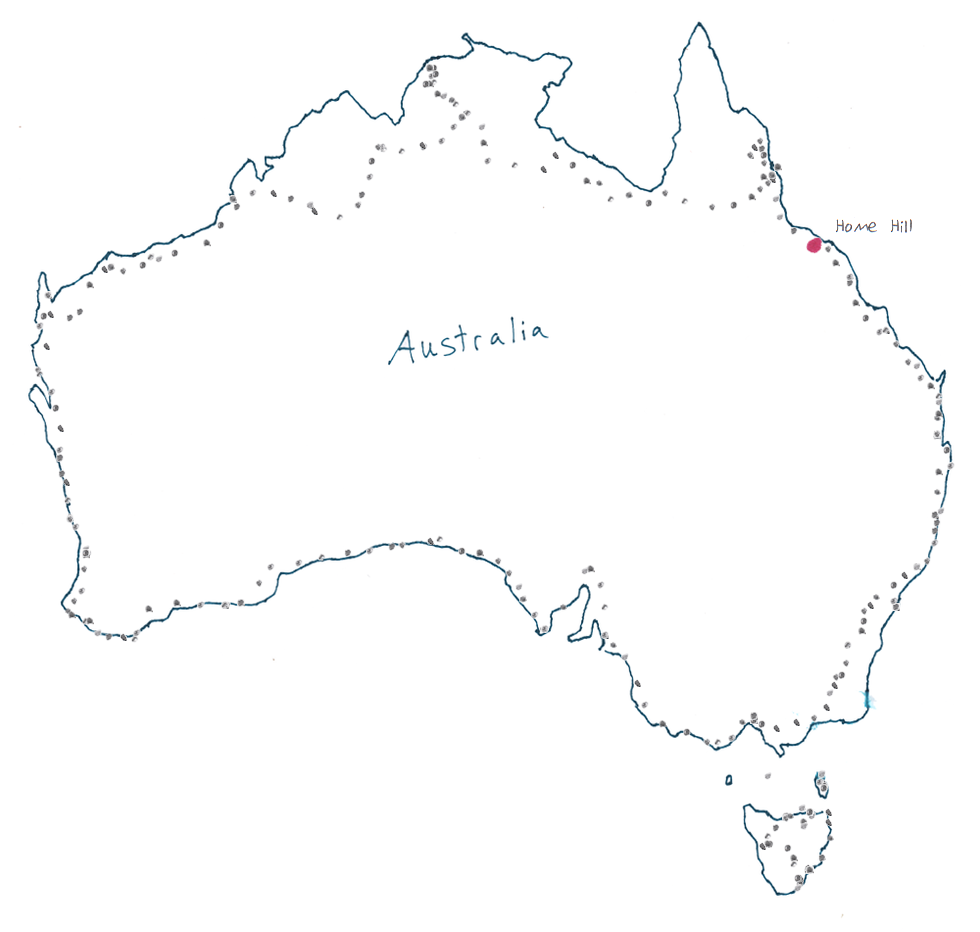 Today was a pretty good day...nice and basic for the most part, except for when my seatpost decided to be a proctologist.

Left Mike and Val's place (thanks again!) and headed out of town. Oh yeah, Val introduced me to avocado and vegemite on toast...yummy. The internet place was open so I decided to swing in there and upload the fat 55 meg update to the travel site. Funny how some large towns have terrible net access places and small ones have some of the best. Had a long talk with Bob who worked at the internet place, mostly about food and the whole GM issue in Australia. He actually reminded me of Jerry Garcia a bit.

At 11:00am I finally got out of Bowen. Thankfully there was a nice tailwind so the riding was fast. About 10k out of Bowen I heard this huge bang under my seat. Next thing I knew my seat fell off and I was thown a bit but was able to stop before the seatpost ended up in a place I rather it not go to. Turns out the seatpost bolt on the seat broke...was able to get the busted bolt back in sans washers.

The scenery started changing to dry scrubland...which is what I pictured a lot of Australia to look like...now I was finally seeing it. Mostly this was just area that hadn't had any farms set up on...since the farms reappeared later in the day.

I saw a figure ahead walking a bike on the opposite side of the road. I swung around to see if he needed any help. He was an older guy in his 60's with very weathered skin. I couldn't understand his accent. He wasn't the typical bike tourer since he was riding a second-hand bike with a arge suitcase strapped to the back and several shopping bags off the front. He's probably one of those people who has biked around Australia twice already and keeps on biking and nobody every knows about it. Ended up seeing two other bike tourers heading south a couple hours later. This is the most I have seen in months. Even had the pleasure of hearing Men at Work's "Down Under" for the first time since I have been in Australia. Even heard it on a different station a bit later. Looked like I wasn't going to make it to Ayr (air) so the caravan park in Home Hill it is. Caravan Park even came with a nice pretty sunset too...what a bonus.

Right now this stray cat is trying to get food off of me, it must think I'm one of those multiple personality people or something. It keeps brushing up against me and annying me, so I shoo it away, then feel guilty and give it some food. There is smoke everywhere too, that is annoying. They are burning off the cane fields and there is this thick haze everywhere. Maybe I should just go to sleep and quit trying to turn this into one of those travel writing things where all the writer does is complain about everything.