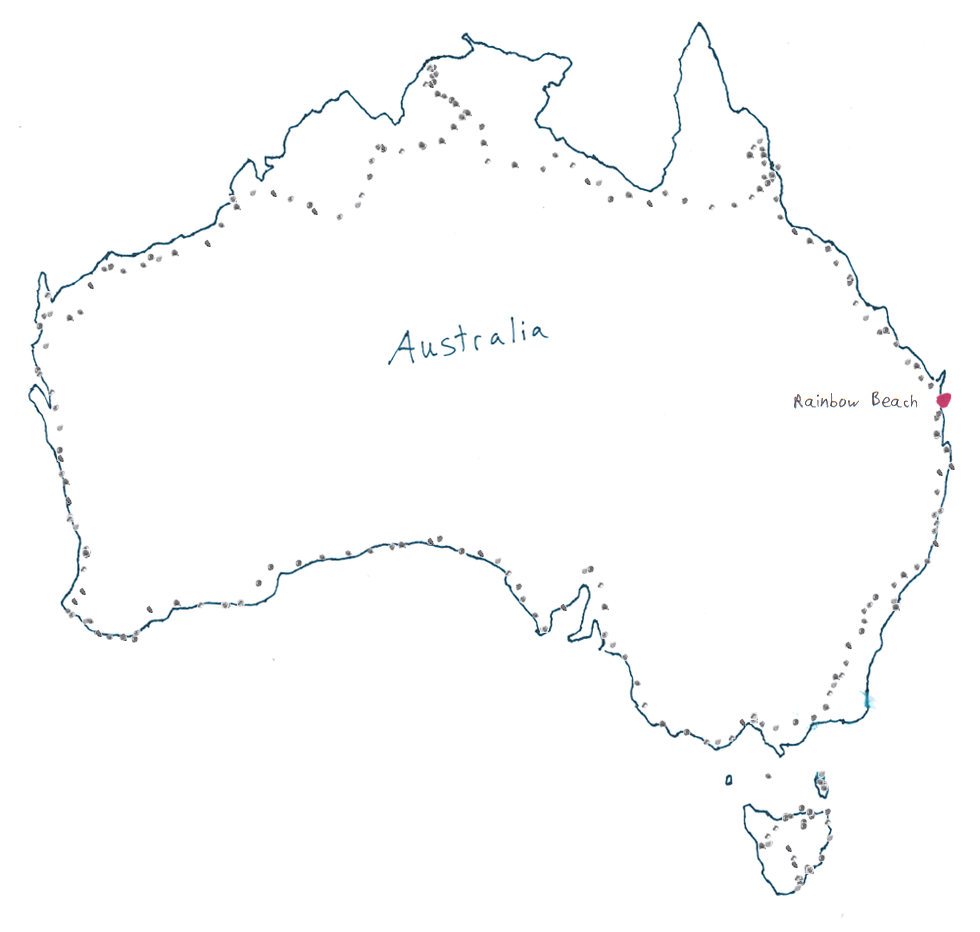 Wow, what a day today was.

Woke up around 10am, mostly since I didn't get to bed until around 11pm. Made coffee and got rolling. Biked a bit and saw a couple of people with backpacks up ahead of me. Just as I got close to them they turned around in unison with their thumbs out. I laughed and stopped. Ended up walking with them for an hour. One of the guys' dad won the three peaks race last year. It is this yacht race where you go between Flinders Island and Hobart, and have runners run up Strezlecki (the one I climbed) on Flinders and Mt. Wellington in Hobart...there is another I'm forgetting.

Anyway, I later spent some time in the ocean, that was pretty nice, and took a few clock photos on the beach. It was good to spend a day biking up the beach. The most traffic I had to deal with was the occaisional 4x4 driving up the beach. I even had to put on Janes Addiction's "Up the Beach / Ocean Size"...since it was appropriate for the situation.

I stopped at the wreckage of the Cherry Venture. This is a ship that ran around in a storm three days after I was born. It looks like I've aged better though. There was actually a little ice cream truck there, so I b ought the most expensive ice cream bar I could...a Streets Magnum Ego ($3.30). The guy told me that there are some rocks to get around before you get to the town of Rainbow Beach. You have to get through before high tide, othwerise you get stuck and have to wait again till low tide. Because of this, I didn't make the sidetrip up to the lighthouse.

The ride was wonderful along rainbow beach. I had it to myself as the sun was setting. About one k from the rocks I heard a KABOOM!, my rear tire exploded. I think this is the part of the day where things turn to crap again I thought. I debated about riding or fixing it...since I was really pressed for time since the tide was coming in. I fixed it...not really. To make a long story short my backup tire was messed up a bit. Anyway, I put the exploded tire back on and rode it flat, didn't really make much of a speed difference on the sand after all. I neared the rocks and could see what all the fuss was about. You had to go around this head, and the waves came right up to the rocks. I could still get though every time a wave went out...but a few times there were too many waves and I was riding in the ocean for a few seconds at time. There was a stairway leading up the rocks and I headed for that. I made it just in time. Had it been another five minutes I would had to carry the bike through the water to the stairway. I lugged (and I mean lugged) the bike up all the stairs...Stairway to Heaven stuck in my head. Later I found out that these rocks are pretty famous for destroying cars that try and get through before high tide comes in. In fact, the visitor center and pub have walls of photos of cars, trucks, buses(!) up against the rocks, with water pouring in through the windows.

AFter fish and chips I fixed the rear tire. I don't want to ever look at a 700x28c tire again. A couple that was eating invited me over for some wine, which sounded like a good idea. They were from Ireland and Scotland. They had way too much food and gave me a bunch of their french fries. I sat there drinking red wine and eating potatoes, my filthy black hands leaving grease on the wineglass and potatoes. The couple is in the clock photo below where they are looking from underneath the table. They told me about the hostel and I ended up there. Granted, I spent another hour or so fixing the tire, ended up having to dumpster dive my old tire and stuff about 75 australian dollars into the tire to keep it from blowing out again. The guy at the hostel wondered why I didn't wait till tommorrow...I wanted to start tomorrow with a clean slate dang it. (granted, my tire will probably explode about five minutes into tomorrows ride and I don't have another, things might get interesting).