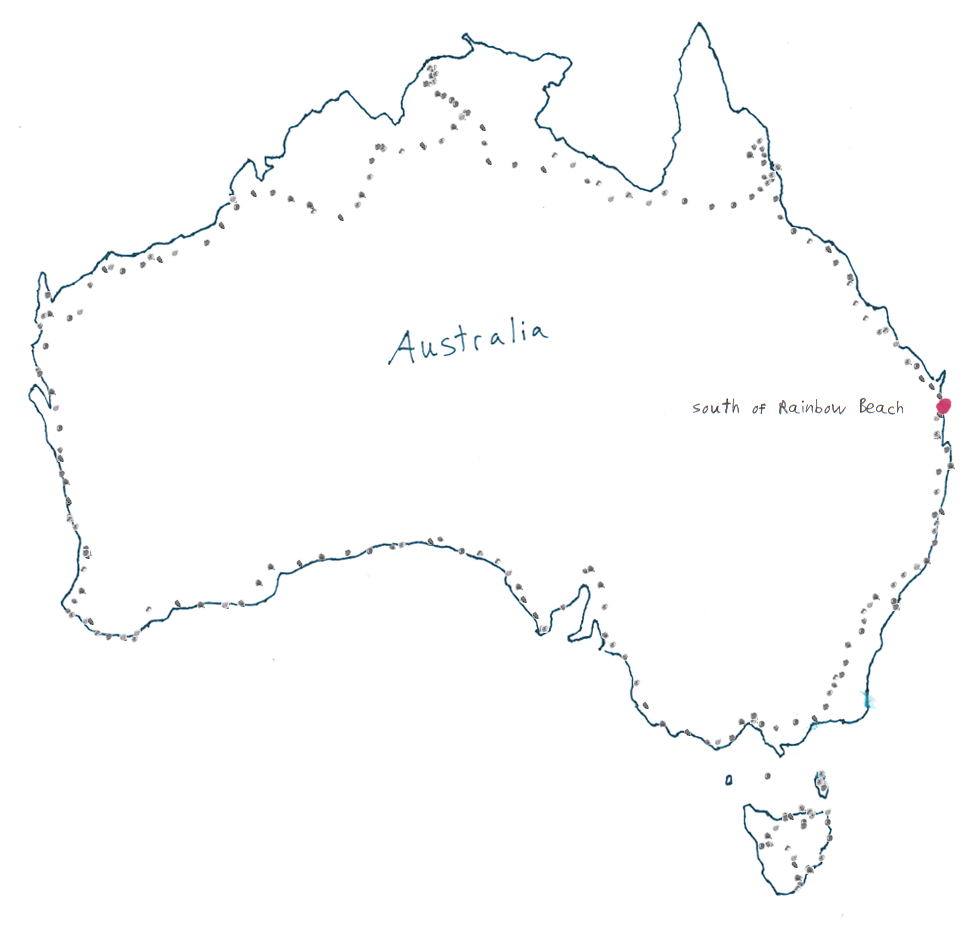 Woke up and cooked breakfast (eggs, cheese, and frozen veggies, how un-museli) and did yesterdays entry in the tent. Figured I'd hang around till 8am and see if my chance one of the carvan park owners had grabbed my battery charger. The woman was up at the counter and I told her the whole ordeal. She rolled her eyes and said sometimes the reprobates (I think that is what she called them) go to the other end where the older retired people are (and me). Had I known there was er, trying to keep my Portland Political Correctness badage, "a redder shade of neck on a whiter shade of trash" kids in the park, I wouldn't have left the charger in the bathroom. The above line is from a Pavement song, whose writer/lead singer lives in Portland...so that is the tie-in with Portland. (on a side note, Simona in Brisbane introduced me to that Pavement song, kinda funny since Steve Malkmus lives in Portland close to where I lived, and 10,000 miles from Simona).

Rode through the morning, traffic and houses everywhere I knew the Sunshine Coast was developed but not to this extent. I tried not getting pissed about the charger incident. I'm not really pissed about the money, I'm pissed because it is going to be a logistical hell to get another one. (one that is lightweight, not brick-heavy like all the ones down here). Whatever

Ended up rolling into the town of Noosa. At the ATM another biker started talking to me and he suggested I bike up the coast on the beach itself to Rainbow beach. I'd have to take a quick barge trip across the river (thus breaking my tracks), but it sounded like a lot better mood lifter than riding though a bunch of cars, trucks, and "your little happy corner of the world" cookie-cutter housing developments. Ate lunch and did some internet. Noosa must be another 18-30 area since the girls were cuter and Internet access was cheap.

I biked though a bunch of areas with nice holiday homes and newly-built shopping malls until I got to the town of Tewantin. Upon pulling up onto the main street I heard a hissing sound, my rear tire was going flat. I decided I needed a treat before it could be fixed. Plus, since the tire was naughty I forced it sit there flat and think long and hard about what it did.

As I was fixing the tire a kid bout eight came up to me and stared, so I started talking to him. He tried helping me put the tire back on and I had to assure him that I could get it on. Heck, I've only done it about 31 times during this trip. Sidewall was blown out of the tire, so I slapped on my extra one.

I made my way to the barge, passing signs to the giant seashell and the house of bottles. I went and saw the shell, it was an art gallery, but wasn't in too good of mood to go out of my way for tourist traps. Had a quick 3 minute ride across the river and the four cars on the barge drove off. I rode down the road a bit and back (in an anal way of making up the distance I skipped on the river). I biked up the road a bit and it was...quiet. I heard birds all about. It was amazing how just by corssing a river you could go from a southern california area into an area that was totally quiet and undeveloped.

I eventually made my way out to the beach and took a few photos. It was quite tough trucking the bike though the deep sand. Four-wheel drives drive up and down the beach her so there were some pretty big ruts here and there.

A couple from Canada came by and I talked to them for awahile. They even ended up in a clock photo. I biked up the road a bit to where it turned onto the beach and ended.

MAde dinner and am now sitting on the beach writing this. The moon is full tonight. I missed the moonrise, mostly because I forgot to wait for it when I was on the beach a few minutes earlier. Going to bike up the beach in an hour or so in the moonlight. The tide goes all the way out at 2am. I figure a 15 mile bike ride up the beach under a full moon will be a good trade off for all the crap I've dealt with over the past couple of days.

(after the full moon ride)

The ride was incredible up the beach. I left about 11pm and the tide was pretty far out. The moon was full and lighting up the whole beach. I rode for about three hours up the beach. There were all kinds of little things that made the ride great, like watching the moon's reflection off the beach as I rode. The moon was right above me, so the reflection was nearly under my feet. Crashed out about 2am. This moonlight ride was a worthy trade for all the crap I had to deal with earlier.